If you consider yourself a creative person, a member of the intelligentsia or even just a lover of the arts, you may want to avoid the plays of Wallace Shawn. You (and I and the arts) do not come off well in them. Scratch his deep thinkers and dilettantes and you find fascists and sheep underneath.

Well, he should know. If any American playwright has lived a double life, it’s Shawn. Best known from his many film, television and voice-over performances as a twinkling human Yoda, he writes himself into his plays as a schlump concealing a shiv. The more inconsequential the mood at the start, the more dead bodies at the end.

In less confident hands, such plays — including “The Designated Mourner” and “Grasses of a Thousand Colors,” which have just been turned into terrific earworm podcasts — would be insufferable. They are too funny and then too weird to tune out, yet too morally threatening to sit back and enjoy. Worse, no matter how far into fantasy they tread, they maintain an air of absolute, damning authenticity; if you’ve ever pontificated about poetry at a party, you’ve been seen, and now skewered.

But skewering the blowhards wouldn’t be enough to make Shawn’s best plays great. In “The Designated Mourner,” first staged in 1996, the main character, a mousy Shawn stand-in named Jack, is much more dangerous than the people he hates. A lesser member of an arty coterie in an unnamed country where revolutions, juntas and purges have become as unremarkable as weather, he describes himself as a former student of English literature “who went downhill from there.”

At one time, though, Jack was delighted to be tolerated among the philosophers and essayists, going so far as to marry Judy, the sophisticated daughter of a once-famous, still precious, self-enamored gasbag named Howard (Larry Pine). But when the political winds shift, Jack sees the value in distancing himself from that old guard before the government distances them permanently. He drops Judy (Deborah Eisenberg) for “a very sweet girl” named Peg. He jovially endorses Howard’s description of an older woman they call “the Rodent” as “a cloth you might use to polish silver with.”

That comment reveals Jack undergoing the opposite of a polishing: He is tarnishing, or delaminating, reverting to his natural lowbrow state and cheerleading for the reactionary booboisie. The irony is that, as awful as he is, he’s the only one left at the end of the action to grieve the useless poseurs he hated. This he does with rather too much cheer, as if sharing a cute anecdote: “I have to tell you that a very special little world has died.” Meanwhile, walking down the street, he must occasionally step over their teeth.

If we all believe our little worlds to be special, Shawn, 77, is ideally placed to tell us they aren’t. He grew up in the most rarefied Upper East Side precincts of the New York intelligentsia, a son of William Shawn, the editor of The New Yorker from 1952 to 1987, and his wife, Cecille. Surely the ruthless debunking of self-exceptionalism that pervades his plays has one root in the discovery that his father, for 40 years, kept a second family 10 blocks south from his own: a household consisting of the New Yorker writer Lillian Ross and her adopted son, Erik. 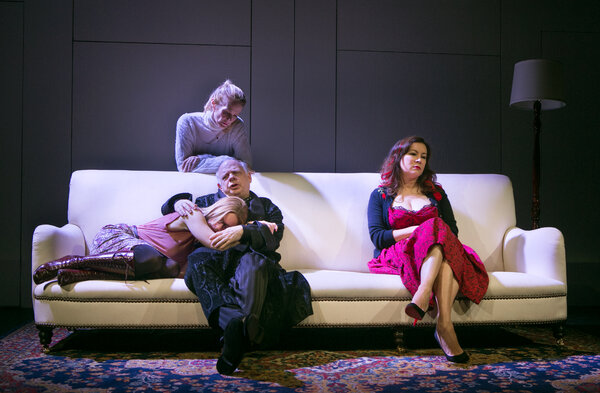 In “The Designated Mourner,” Shawn, who plays Jack, partly recapitulates that trauma, though the character’s infidelity with a “young girl” is one of the smaller indicators of corruption. In “Grasses of a Thousand Colors,” first staged in 2009, similar drives have larger repercussions, as monstrous appetites threaten to consume humanity — and, for a while, the story itself.

Shawn now plays Ben, a doctor who has invented a genetically modified nutrient called Grain No. 1. When fed to animals, Grain No. 1 causes them to eat voraciously and reproduce constantly, thus ending the world’s food shortage. But as the effects of this change move up the food chain, Grain No. 1 not only unlocks a “molecular inhibition” with devastating digestive consequences, it unlocks a pandemic of sexual inhibition as well.

Though “Grasses” at first seems like a cautionary tale about food science and ecological end times, most of its considerable length — like “The Designated Mourner,” it is broken into six segments of about 30 minutes each — is devoted to that sexual unloosening. Ben’s beloved penis now becomes an almost autonomous creature, and its adventures a kind of Rabelaisian picaresque. These adventures involve a harem including not only his wife, Cerise (Julie Hagerty), his lover Robin (Jennifer Tilly) and another lover, Rose (Emily Cass McDonnell), but also a fantastical, queenly cat named Blanche.

When I saw the New York premiere of “Grasses” at the Public Theater in 2013, I found its prurience and misogyny taxing, even though both were deployed satirically. With almost no action — also like “The Designated Mourner,” the play proceeds as a lecture or reminiscence, with occasional illustrative scenelets — it depends entirely on delivery, which onstage became monotonous. However high minded, the pornographic passages, like pornography generally, quickly paled, and the larger story, contrary to the play’s theme, seemed underfed.

Either the podcast is a vast improvement or the world has sunk so much closer to the level of Shawn’s dystopic fantasy that I’m now forced to take it more seriously. In any case, “Grasses,” as well as “The Designated Mourner,” are beautifully rethought for the ear by the director (and longtime Shawn collaborator) André Gregory. The music and sound by Bruce Odland serve both to establish the surreally foreboding mood and to keep you moored in the otherwise drifting timescape of the narratives. Even the plays’ length is turned to good effect in a format that allows you to serialize the experience.

It helps that the actors — all of whom performed their roles in earlier New York productions — have voices of uncommon timbre and distinctiveness. Paradoxically, you know better who’s who without seeing them than you ever did onstage. Ben’s women are especially terrifying, whether flirting or purring or, eventually, whooping like maenads. They are ids run wild in a society losing its mind.

Awful as that is, the men played by Shawn are ultimately more dangerous. Their adenoidal squeak and chuckly delivery disguise both the stripping away of human culture and the ineffectuality of that culture that are his chief themes.

His delivery is crucial. When Mike Nichols played Jack in David Hare’s 1997 film of “The Designated Mourner,” his suave cosmopolitanism made him dangerous from the start. But Shawn’s infernally ingratiating style suggests that true danger comes from not seeing it until it’s too late. His world doesn’t end with a bang or even a whimper but with an anecdote, cheerfully delivered. He may be an apologist for the worst of humanity’s outrages, but he’s also mounting your leg: a beagle of the apocalypse.

The Designated Mourner and Grasses of a Thousand Colors
On major podcast platforms; gideon-media.com