Off-White™ and Nike is a force to be reckoned with. As the holiday season approaches, the dominant duo is back at it again, dropping the Off-White™ x Air Jordan 2 Low “Black Varsity Royal.” While the collaborative release features many familiar motifs, the AJ2s switch things up with the addition of Michael Jordan’s signature alongside elements that nod to the silhouette’s 35th anniversary.

To celebrate this milestone and highlight the model’s influence, we round up a selection of Air Jordan 2s from GOAT that showcase the rich history of MJ’s second signature style. 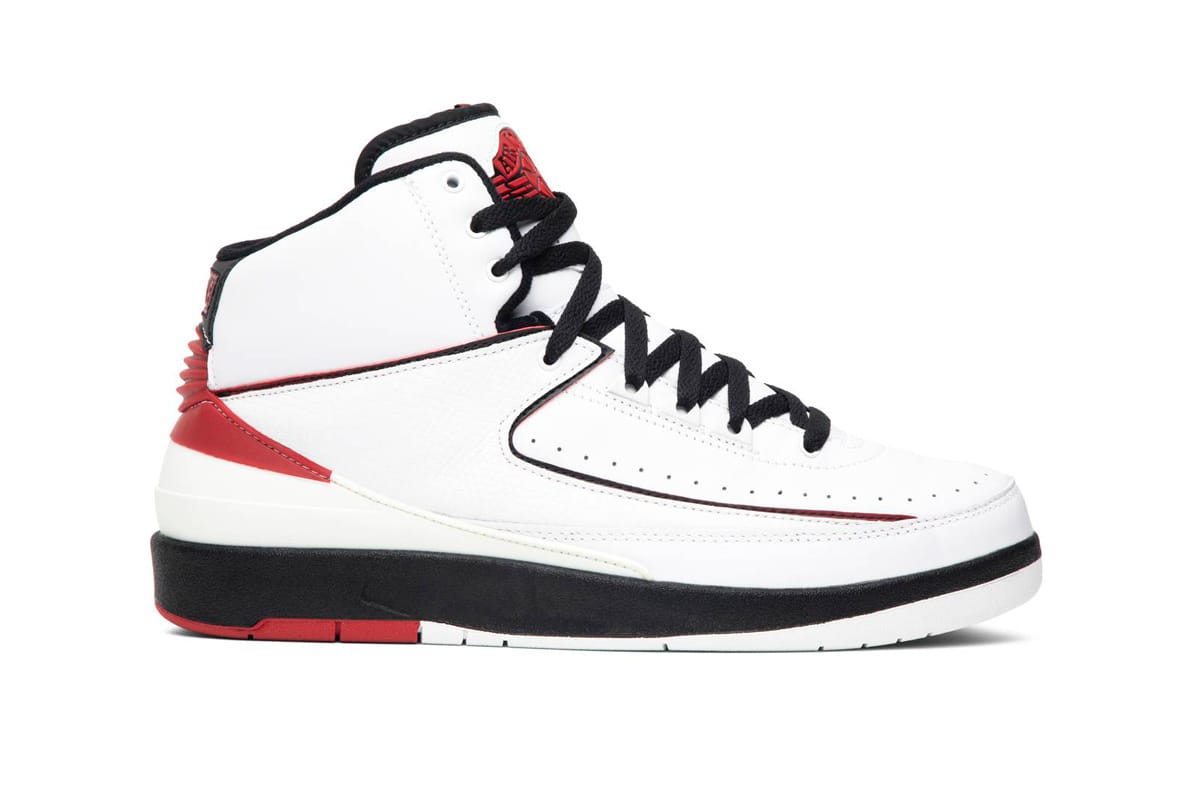 The 2004 re-release of the iconic Air Jordan 2 brought back the shoe’s original colorway, maintaining the clean, streamlined design created by Bruce Kilgore in 1986. At the time, the model broke convention by focusing on simplicity, resulting in a clean look that continues to resonate. The classic sneaker comes through with a mix of smooth and textured white leathers that are contrasted by hits of black and “Varsity Red” on the heel counter, outsole, lining and tab for a Chicago Bulls-inspired feel. 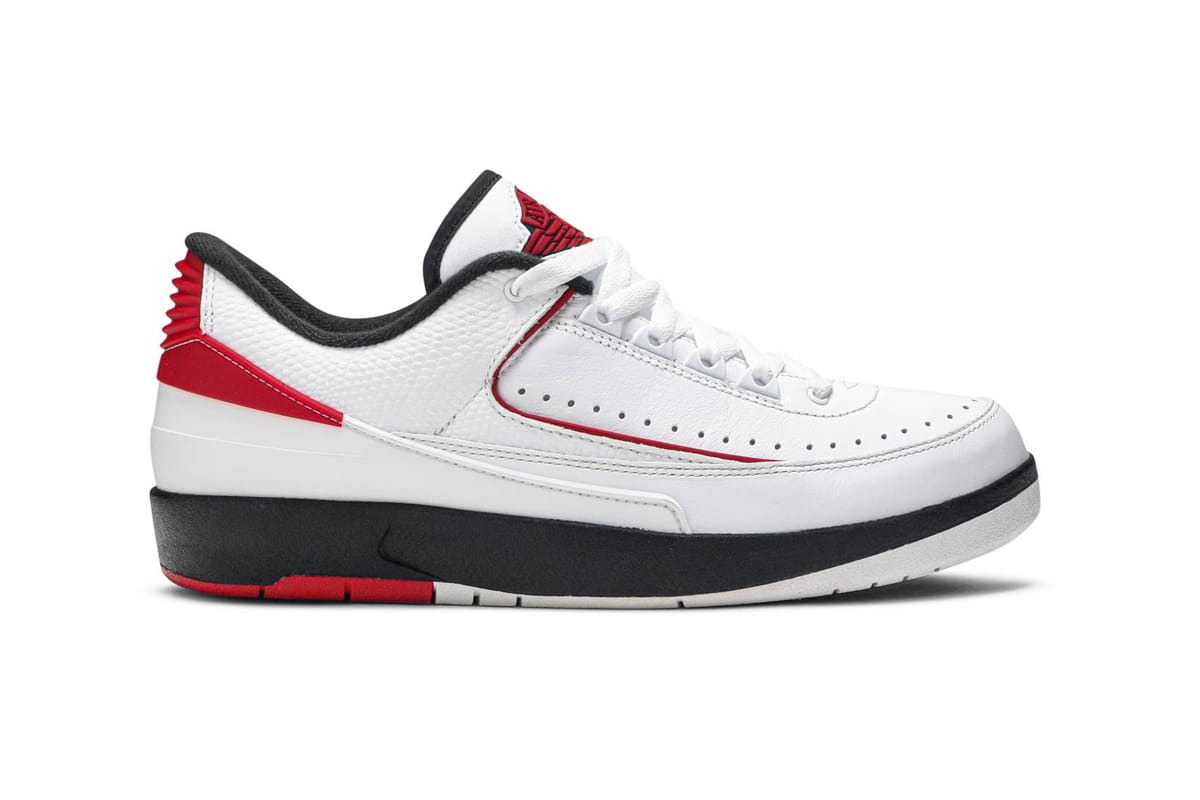 When the Air Jordan 2 Retro Low “Chicago” released in 2016, it marked the return of an OG colorway that hadn’t been seen since it appeared on a retro low-top version in 1994. Like its high-top counterpart, the shoe employs premium white leather construction with hits of black and “Varsity Red.” 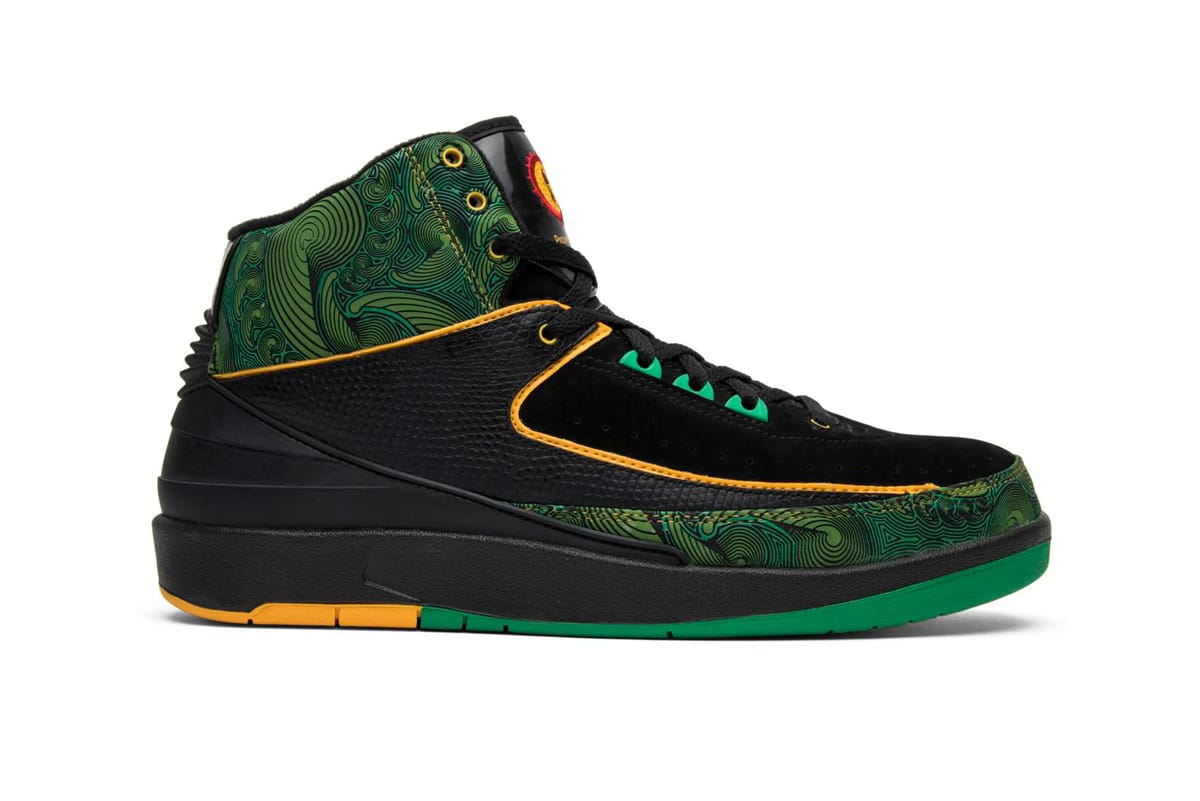 As part of Nike’s collaboration with the OHSU Doernbecher Children’s Hospital in Portland, Oregon, this Air Jordan 2 was designed by 15-year-old Sheridan Brenton who survived a car accident and over 40 surgeries. It marked a significant moment in Nike history, becoming one of the first shoes created outside of the brand’s own design team. It also kicked off a philanthropic partnership that continues to offer the hospital’s patients the opportunity to design a Nike sneaker. The 2007 release has a distinct paisley-printed upper with 35 perforations nodding to Brenton’s jersey number. 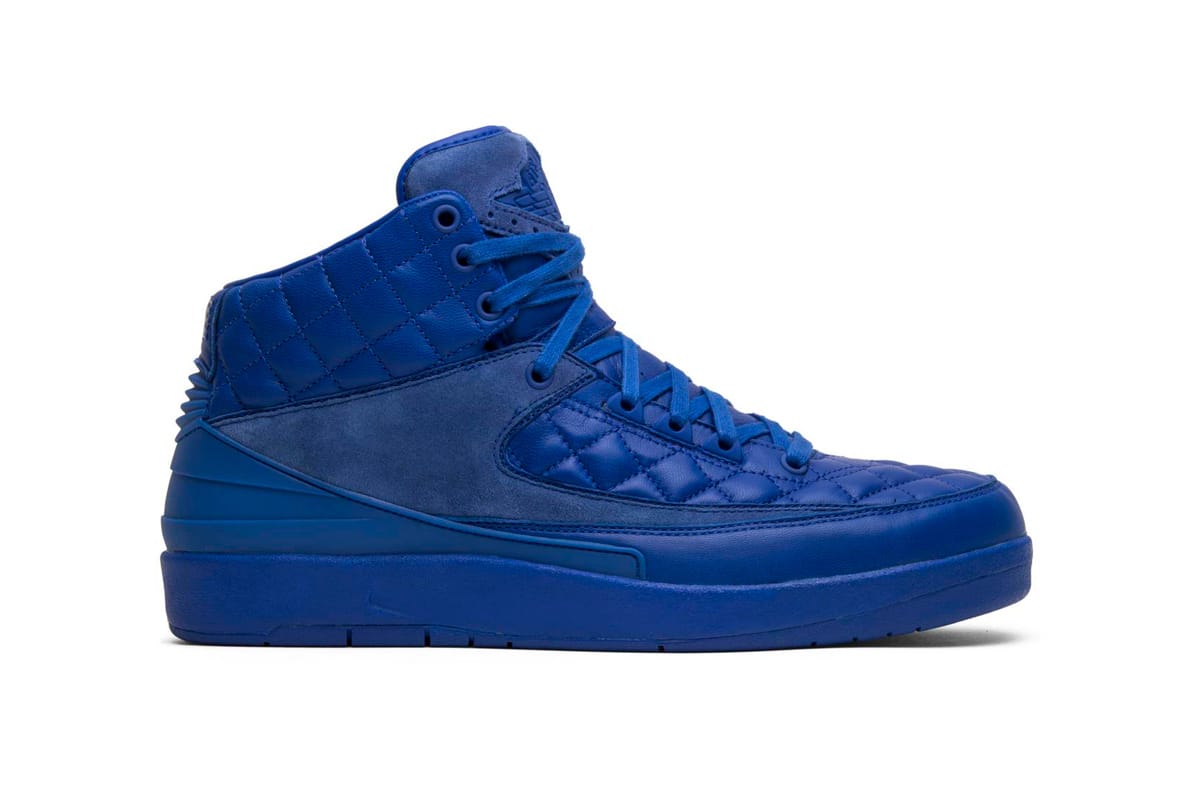 Inspired by the style and craftsmanship of luxury handbags, famed Chicago designer Don C decided that his first collaboration with the Jumpman should be made in Italy. The sneaker is notable for its quilted motif, a style that’s frequently used in leather goods. In step with the high-fashion execution, the shoes were released with a corresponding bomber jacket and came with special packaging, dust bags and gold Wings logo pins. The Just Don x Air Jordan 2 Retro “Varsity Royal” wasn’t made available online, making the shoes difficult to come by at the time of release. 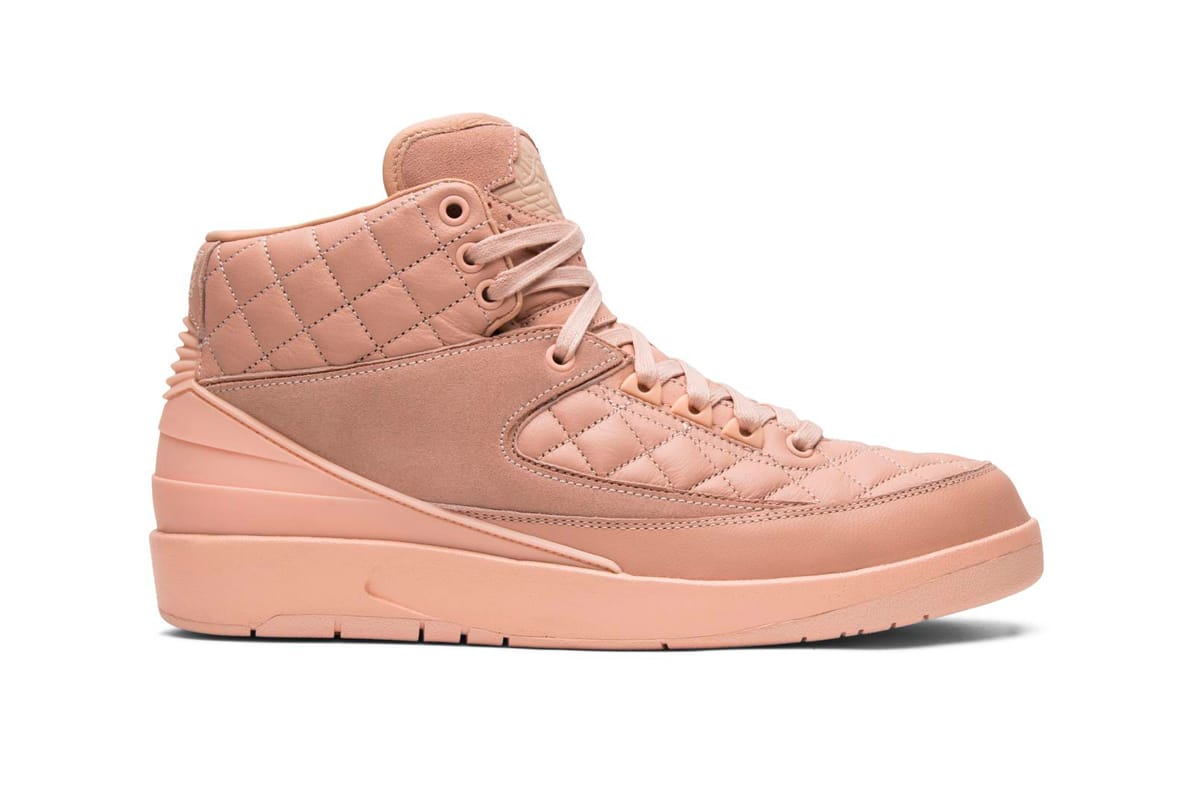 Partnering with Don C once again, the Air Jordan 2 Retro “Arctic Orange” was released as a Mother’s Day exclusive to honor the designer’s family. Ensuring that women and kids could get their hands on the kicks — something that proved difficult with his previous drop — the AJ2 was offered exclusively in grade school and big kids’ sizing. The “Arctic Orange” leather upper sees the same quilted details on the forefoot and ankle, continuing the luxury handbag inspiration. Other elements include coordinating orange suede overlays and an embossed “Light Tan” Wings logo on the tongue. 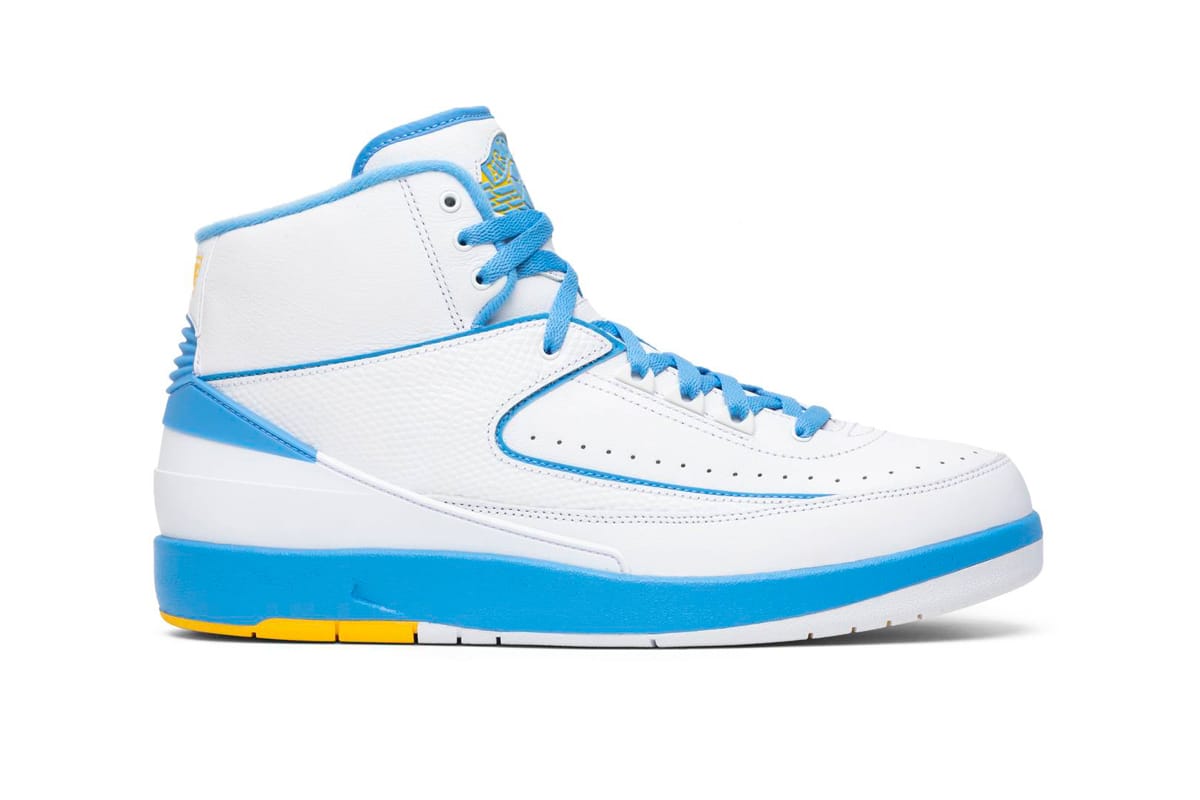 The Air Jordan 2 Retro “Melo” was designed to celebrate the end of Carmelo Anthony’s rookie year with the Denver Nuggets in 2004. Reissued as a retro in 2018, the sneaker is dressed prominently in tones of “Varsity Maize” and “University Blue.” The 2018 version introduced “Melo” branding hits on the insole. 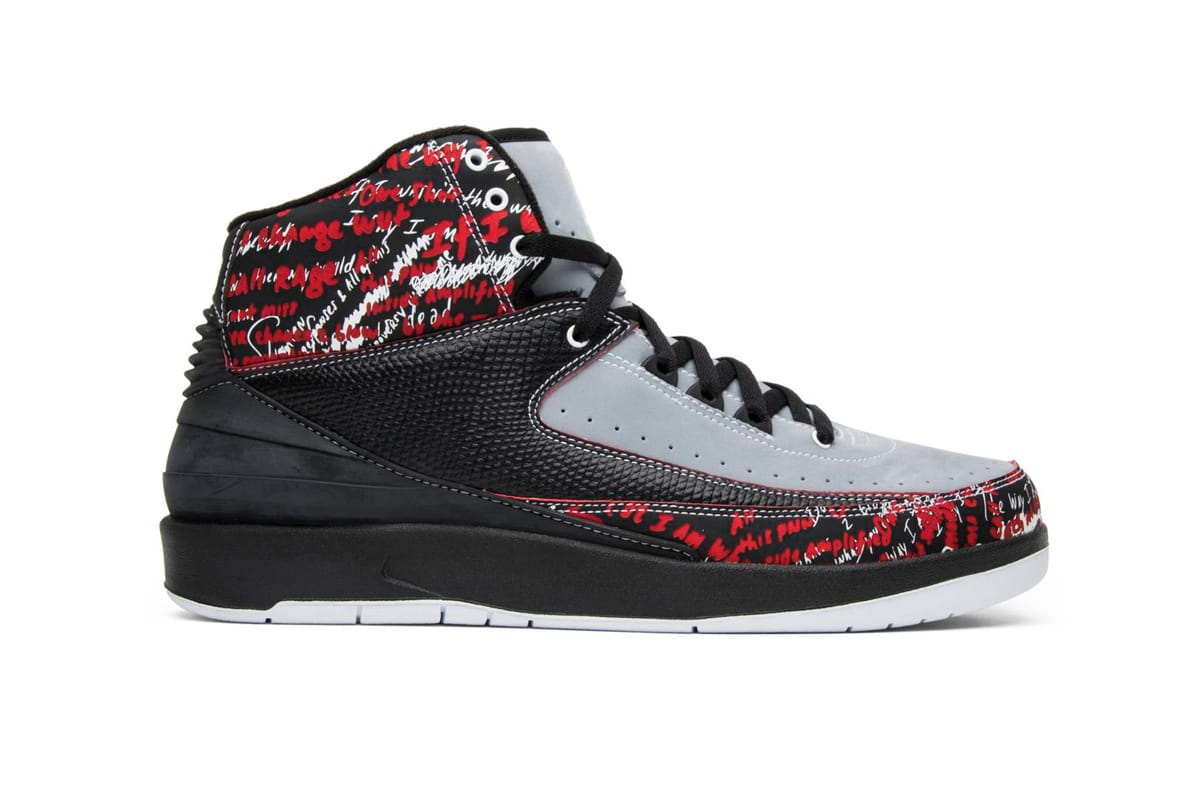 The Air Jordan 2 Retro “Eminem” marked the release of the rapper’s book The Way I Am and his track of the same name. Paying homage to his hometown of Detroit, Michigan, the drop was limited to just 313 pairs — the city’s area code. Lyrics from the shoe’s namesake song are used as a design element, appearing in white and red text on the mudguard and ankle. This is matched by a light grey suede upper, textured side panels and “Stealth” accents. 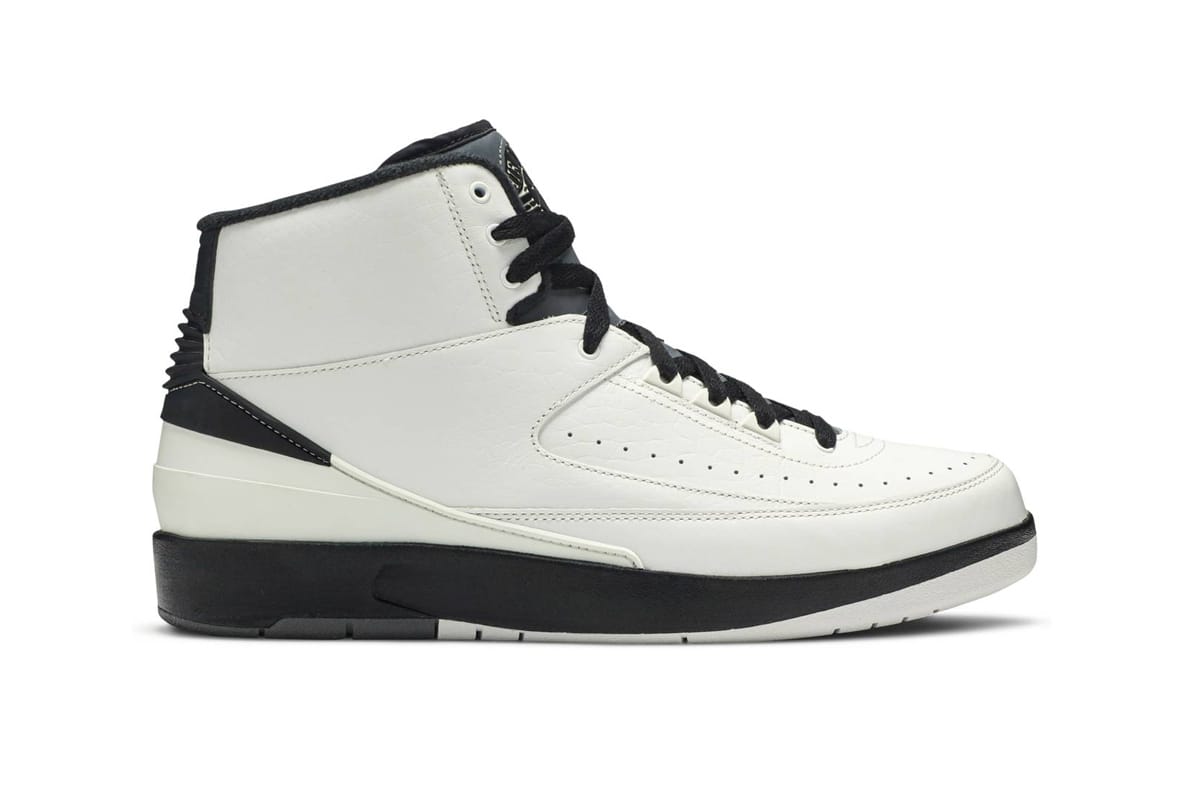 2016 was a big year for the Air Jordan 2, as Nike celebrated the iconic style’s 30th anniversary. Part of its crop of celebratory releases was the Air Jordan 2 Retro “Wing It.” The streamlined design of the Air Jordan 2 was made only sleeker with the pared-down color story of white, black and grey. Featuring an upper with a faux reptile treatment and a unique “Wing It” detail on the heel, this shoe offers a nod to Jordan ads from the silhouette’s original release year. 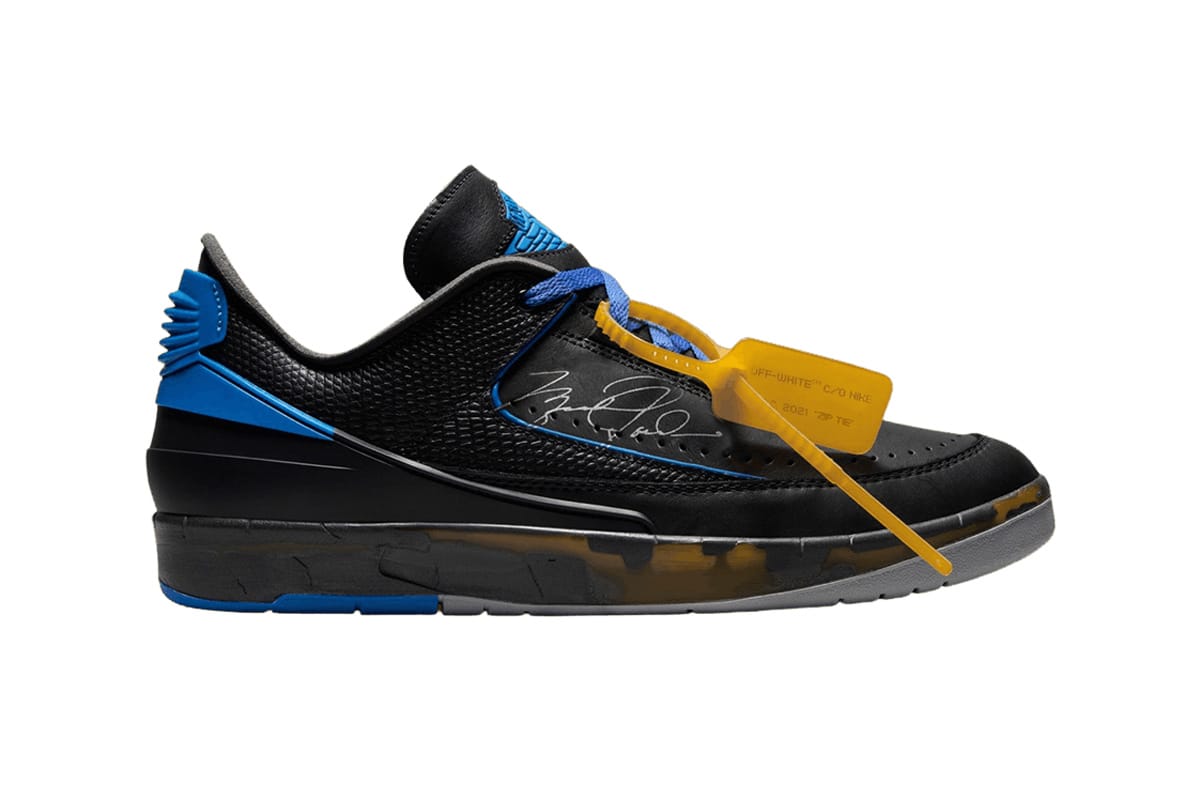 Designed in collaboration with Virgil Abloh, the latest Nike and Off-White™ partnership is a steady mix of the familiar and the new. The release shows off typical Off-White™ design details such as the brand’s Helvetica branding and zip-tie laces. For the first time, however, the designer used MJ’s signature on the execution, appearing on the lateral mid-panel. This appears alongside a black leather upper with tonal lizard-textured overlay accented with “Varsity Royal” hits. Finally, the “pre-crumbled” sole provides an aged look, paying homage to the Air Jordan 2’s 35th anniversary.
Source: Read Full Article