Gladiators star Wolf would love to return to the show as he confirms his son Dean has sent in his application for the reboot.

The original series of the intense game show first aired in 1992 and captivated viewers on Saturday nights for eight years before it finished for good in 2000.

Now the ITV show has been confirmed to be returning in 2023, with the news driving fans wild when it was announced earlier this year.

And viewers went even crazier for the news former star Wolf would be up for returning – as would his son.

Now age 70, the beloved bad guy – real name Michael Van Wijk – appeared on Thursday’s episode of Good Morning Britain alongside his son Dean, aka the Wolf Cub, to speak about the show.

The pair confirmed to Kate Garraway and Ben Shephard that Dean has sent in his application to the show, with both admitting they would love to see the baton be passed on.

An eager Wolf Cub even jumped in and declared: ‘I’d be ready to do it tomorrow!’ 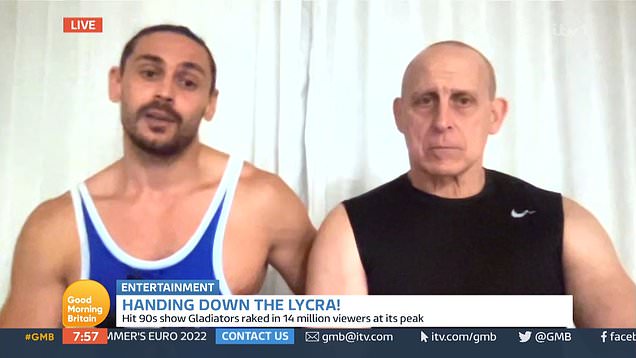 ‘We haven’t heard anything back from them,’ Wolf pointed out, adding: ‘Fingers crossed.’

Wolf also spoke about his continued love for the show, and how he would love to return – either as an athlete or potentially as a presenter.

‘I could do all the games comfortably,’ the former Gladiator said, adding he had ‘a commitment to a certain level of fitness.’

He added to the GMB hosts: ‘But I’d also like to be like you guys – be a co-presenter.’

Wolf argued it could be good for the rebooted show to have a presenter with the ‘experience’ he had, having never missed a show over eight series.

The OG star previously said he would ‘love’ to compete on the show again, insisting: ‘I am fit enough to do it, fitness isn’t the problem, but I don’t think they would take me on at 70.’

Gladiators saw four members of the public compete in gruelling trials against the resident Gladiators each week, in events that test their speed, skill, stamina and strength.

The official premiere date is yet to be revealed, but filming is set to take place at the Utilita Arena Sheffield in 2023.

Original ITV series became quite the live TV event and attracted over 14 million viewers at its peak, and in 2008 Sky One briefly revived the show.

Gladiators is set to return in 2023 on BBC One and BBC iPlayer.