“Good Morning Britain” presenter Susanna Reid addressed the departure of her controversial former co-host, Piers Morgan, during an on-air segment of the show on Wednesday.

“Now Piers and I have disagreed on many things, and that dynamic was one the things that viewers loved about the program,” she said. “He is, without doubt, an outspoken, challenging, opinionated, disruptive broadcaster. He has many critics and he has many fans.”

Reid then referenced Piers’ latest attacks on “Good Morning Britain,” in which he dismissed Meghan Markle’s experience dealing with racism as a member of the royal family and cast doubt on the revelation in her interview with Oprah Winfrey that she had contemplated suicide during her time as a working royal.

“You all know that I disagreed with him about Meghan’s interview, he himself clarified his comments about her mental health on the show yesterday,” she said. “There are many voices on ‘GMB’ and everyone has their say. But now Piers has decided to leave the program. Some of you may cheer and others will boo.”

Morgan, who has frequently used his “Good Morning Britain” position and his Twitter platform to attack the Duchess of Sussex, received widespread backlash earlier this week after he discussed her interview with Winfrey on Monday, saying, “I’m sorry, I don’t believe a word she says … ”

“I wouldn’t believe it if she read me the weather report,” he added.

Morgan seemingly attempted to clarify his positions on the show the next day by noting that he believes issues of mental illness and suicide should “be taken extremely seriously.” But he prefaced that thought by maintaining that he “generally” didn’t believe what Meghan said during her and Prince Harry’s sit-down with Winfrey on Sunday night. (He has continued to double down on that position on Twitter.)

The relentless Meghan critic also notably stormed off the set of “Good Morning Britain” during Tuesday’s show after weather presenter Alex Beresford called him out over his treatment of The Duchess. 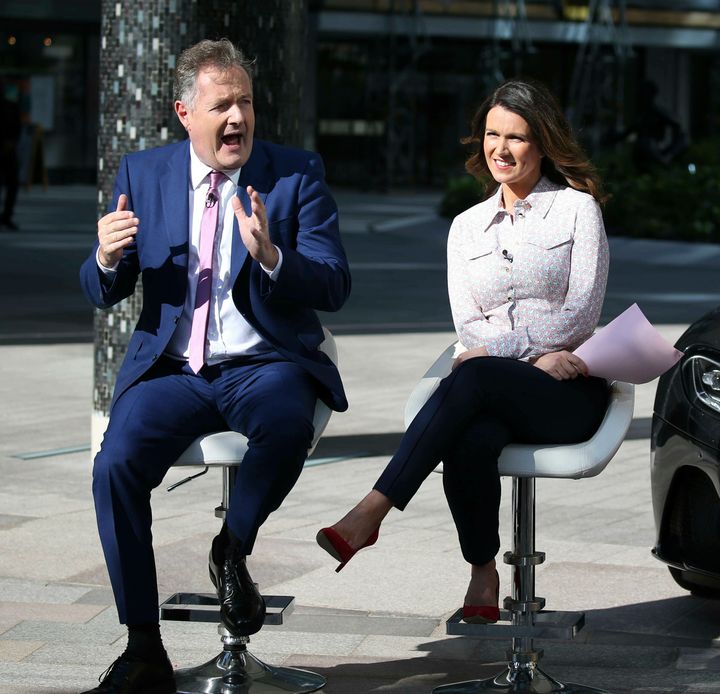 On Wednesday, multiple news outlets reported that someone on the Duchess’ behalf had formally complained to ITV that Morgan’s comments could impact viewers who are dealing with mental health struggles.

Later in Wednesday’s “Good Morning Britain” segment, Reid noted that she had worked as a presenter alongside Morgan for over five years.

“It is certainly going to be very different,” she said. “But shows go on, and so on we go.”