LOS ANGELES — Brandon D. Landers is not represented by a gallery. He doesn’t have a website. He makes his art in a small shack behind a friend’s house in Bakersfield, Calif., sleeping on an upper bunk above the stacked canvases and splattered paint.

Landers, 36, who grew up in South Los Angeles, is not sure he’s ready for prime time. He was also happy with his most recent day job, teaching art to young children at Franklin Elementary School in Bakersfield.

But now, with his work on view through Aug. 1 at both the Hammer and the Huntington in their joint biennial, “Made in L.A. 2020: a version,” Landers may not be able to postpone his professional development much longer. As museums have reopened and people are starting to come through the exhibitions, his work has stood out to collectors, dealers and curators.

“The response has been really strong and immediate,” said Connie Butler, the Hammer’s chief curator. “At a moment when there is so much figuration in the art world, there is something extremely human and fully embodied about those images of Black life.”

The Hammer has been getting inquiries about Landers once or twice a week, Butler said, “but he’s held everyone off.” 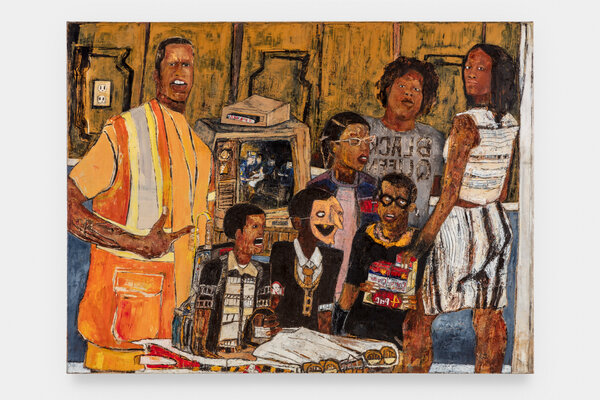 During a recent interview in Los Angeles, lanky in a white T-shirt and baseball cap, Landers said he is working up to the idea of someday joining a gallery. “Once I get into a bigger studio and feel more comfortable, then I’ll make that decision,” he said. “I don’t want to be part of that right now, but I do because I love this stuff.”

That hesitation reflects Landers’s larger ambivalence; he wants to be part of the art world, but not necessarily the art market, which he said he associates with “sharks” and having to give up some control. (It took two months to get him to agree to be photographed.) “I like staying under the radar,” he said. “I’m not totally prepared.”

He’s also adjusting to life without his mother, who died at 55 in March without ever getting to see Landers’s work in “Made in L.A.” (which was delayed until April 17 by the pandemic). As an only child, Landers was strongly connected to her.

He credits his mother with keeping him out of trouble — “She had to pick me up from street corners when I was in the wrong place at the wrong time” — and persevering, despite a period when they were homeless.

“She just never gave up,” he said. “We moved a few different times.”

Landers’s paintings are imbued with that hardscrabble experience and populated by the many people who constitute his support system; the cousins who hang out at the local Shell gas station before and after parties. His friends Ronnie and Dante. Relatives and their dogs.

“I try to incorporate family and friends,” Landers said, “my relationship to my community. I want to put them in history.”

Electrical outlets reappear in his paintings, a reference to the colloquialism, “Are you plugged in?” To which he answers, “I’m the outlet.”

The canvases have the quality of collage, since Landers shapes the thickly applied oil paint with a palette knife, creating irregular surfaces. There is an alternate reality to his portraits and scenes, with toothy grins, distorted physical proportions and backward text.

“That constant mirroring of reality makes the paintings feel like portals,” said Lauren Mackler, an independent curator who, with Myriam Ben Salah, organized “Made in L.A.” “There is the texture that seems so unique, the manner in which he paints, the clustered portraiture and the way in which all the figures relate to each other. The surrealism in the paintings through the loss of perspective — you can’t place the physics of the space within it.”

Mackler and Ben Salah made repeated trips to Landers’s studio and were captivated by the work. “Immediately we knew he was an artist we would love to showcase,” Mackler said. “There is this striking individualism in his practice, because it seems so solitary.”

Art kept Landers company during his childhood. Tagging along with his mother on errands, he would draw all day, using whatever was at hand — a pencil, sticky pad notes. Inspired by his uncle, who collected Hot Wheels and G.I. Joes, Landers also started collecting action figures, which he would draw.

After injuring his wrists in a fall from a tree in 11th grade, Landers couldn’t play basketball anymore and turned to art.

At California State University in Bakersfield, where he earned his bachelor’s degree, he studied art history and worked in the children’s center. Once out of school, he got a job working as an educator at the Bakersfield Museum of Art.

“You just knew this is something different,” said Vikki Cruz, a former curator at the Bakersfield Museum, who gave Landers his first job in the art world, helping with installations. “This guy is going places — he’s going to blow up.”

“He was constantly working,” added Cruz, now a curatorial administrator at the Los Angeles County Museum of Art. “He had created this plaster sink — a lot of three-dimensional work. Art came before anything else.”

Landers has so far concentrated on painting, stretching his own canvases, buying the cheapest paint he can find (sometimes at arts and crafts stores like Michael’s or Hobby Lobby) and using the palette knife that gives his work its textured patina. “I scrape away,” he said. “It feels like I’m icing a cake at times.”

He had solo shows at a couple of small Los Angeles galleries — Club Pro in 2017 and M+B gallery in 2019, with work that The Los Angeles Times called “refreshingly blunt.”

In 2019, Carlye Packer of the now defunct Club Pro curated a selection of Landers’s paintings for the Los Angeles Felix art fair at the request of one of the fair’s founders, Dean Valentine, who serves on the Hammer board of advisers and owns the artist’s work.

“You could tell immediately the paint handling was incredibly expressive,” Valentine said. “Whether it was an interior or a figure sitting, there was an immense amount of feeling in the work. They all seemed to come out of childhood memories.”

Valentine was also struck by the modesty of Landers’s studio, which he visited with Ali Subotnick, a former Hammer curator. “To show us one painting, he had to move 30 other paintings,” Valentine said. “I really came to think that Brandon was going to be a central painter in this moment.”

Landers’s work as an art teacher at Franklin Elementary has given him tremendous satisfaction. “I just love it there,” he said. “The energy, the sense of newness every day, the creativity. I get animated.”

His mother did get to watch an online “Lunchtime Art Talk” at the Hammer on Feb. 10, at which Erin Christovale, an associate curator at the museum, described Landers’s depiction of everyday life in Los Angeles as “the Black quotidian” and said she sees in it aspects of the artists Romare Bearden, Robert Colescott, Clementine Hunter and Kerry James Marshall.

“Landers renders yellows, browns, blacks and reds in order to depict the richness and multivalent skin tones of Black Angelenos and by extension the regal descendants of the Great Migration,” Christovale said during the talk. “When I step into Landers’s universe I am struck by the ways in which intimacy and familiarity rub up against the grotesque and sometimes violent, the way in which characters are animated, fueled by ’90s cartoons and John Singleton movies, to gaze back at the viewer.”

“Landers is an astronaut,” she added, “propelling into the future.”

His hope is to eventually have a proper studio. For now, he makes do in his shack, which is about 300 square feet and costs $300 a month. There is no kitchen, just a toaster oven — where he makes frozen pizzas — and a hot plate, where he boils water for noodles. If his slight frame suggests Landers is undernourished, that may be because food is not foremost on his mind. He’s focused on art.

“I’ve been hungry, but I don’t even notice,” Landers said. “Because I’m moving and that fills me.”