The first shows to reopen face a challenge: It is hard to draw audiences without tourists, but hard to draw tourists without shows. 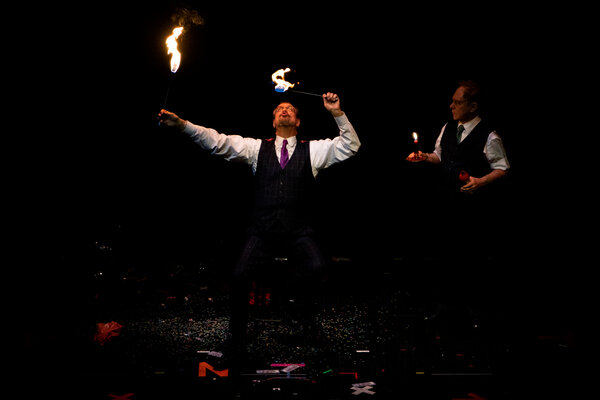 LAS VEGAS — Penn Jillette, one half of the Penn & Teller magic and comedy act that has helped define nightlife in Las Vegas for decades, bounded onto the stage the other night and looked across a maskless but socially distanced audience scattered across the theater at the Rio All-Suite Hotel & Casino.

“We just did 421 days without a live show,” he said, referring to the forced sabbatical that stretched through the end of April, his silent partner, Teller, finally back at his side. “Boy, it’s nice to see people in the theater.”

The next morning, less than a mile away, a troupe of acrobats from Cirque du Soleil was somersaulting through the air, all wearing masks, as they warmed up on a steel frame ship swinging over a 1.2 million-gallon pool in anticipation of reopening “O” in July and a second show, “Mystère,” later this month. By the end of the year they hope to have seven Cirque du Soleil shows back at full capacity.

Fifteen months ago, this bustling tourist destination in the desert shut down almost overnight, as theaters, restaurants and casinos emptied out and Las Vegas confronted one of the biggest economic threats in its history. The stakes could not be higher as the Strip tries to emerge from the shadow of the pandemic and the first crop of shows face a challenging reality: It is hard to open shows without tourists, and it’s hard to draw tourist without shows.

But a walk through its bustling sidewalks last week suggests an explosion of activity, befitting — in its extravagance, and this city’s appetite for risk — what has always made Las Vegas what it is. The change since last spring, as measured by the return of surging morning-to-midnight crowds, is head-snapping. While just 106,900 tourists visited Las Vegas in April 2020, according to the Convention and Visitors Authority, some 2.6 million people visited this April — a big rebound, but still almost a million shy of what the city was attracting before the pandemic. 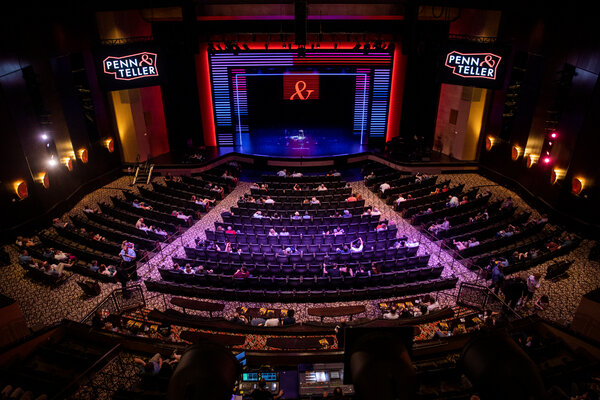 Las Vegas began filling its theaters ahead of New York, where most Broadway shows will not reopen until September, and other cities, though many are now rushing to catch up. “I don’t know if culturally that’s a good thing,” Jillette said. “But I will tell you I believe we’re right this time.”

The city’s tourism-powered economy was staggered during the pandemic, as Americans avoided airplanes, restaurants, theaters and crowds. Those days seem to be over.

“As soon as the governor and the county said we could open, the resorts wanted us to open,” said Ross Mollison, the producer of “Absinthe,” a cabaret and adult humor show, whose website reassures guests by saying, “When you arrive at Absinthe, the Green Fairy promises you filthy fun in a spotless venue.”

Penn & Teller started slowly, as they reunited an act whose first Las Vegas show began in 1993, in deference to the wishes of its performers as well as to state and local health regulations. Their first show was April 22, after both men were vaccinated. By last week 250 people were scattered around its 1,475-person auditorium as the lights dimmed one night just after 9 p.m. But with Nevada Covid-19 restrictions lifted as of June 1 by order of the governor, Steve Sisolak, the show is moving to increase capacity: It plans to sell every seat by the end of the summer, said Glenn S. Alai, its producer.

They are at the front of a parade. David Copperfield is up and running, as is “Absinthe,” the Australian Bee Gees, Rich Little and a Prince tribute show. A six-show residency by Bruno Mars at Park MGM in July is sold out, and Usher, Miley Cyrus, Donny Osmond, Barry Manilow, Dave Chappelle, Garth Brooks and Bill Maher are all coming to town. Star D.J.s have been lined up by the city’s mega clubs.

Show business has always been big business in Las Vegas, but it has become even more vital in the decades since the region lost its near-monopoly on legal casino gambling. Before the pandemic, there were more than 100 theaters in Las Vegas, with a combined 122,000 seats, plus 18 arenas that can hold another 400,000 people.