When Harris took the stage for her election victory speech in Delaware on Saturday night in a cream-colored Carolina Herrera suit, the costume department at the late-night sketch show scrambled to dress Maya Rudolph in a nearly identical look for the episode’s cold open, which aired just a few hours later.

They somehow managed to get the job done in 85 minutes, as the crew immediately jumped into research mode to nail every last detail of the outfit.

“I had a member of my team working on each piece: the blouse, the jacket, and the pants,” wardrobe supervisor Dale Richards told PopSugar in an interview about the episode.

But because most stores around the city had closed for the night, the costume team’s only option was to pull from its own supply of clothes.

Luckily, “SNL” just happened to have a white suit on hand that was originally purchased for Cecily Strong for her portrayal of Melania Trump in a sketch that never aired.

Despite the first lady’s penchant for pussy-bow blouses, the wardrobe department came up empty, so they had to make Harris’ coordinated silk garment from scratch using a “box of cream charmeuse fabric” instead. 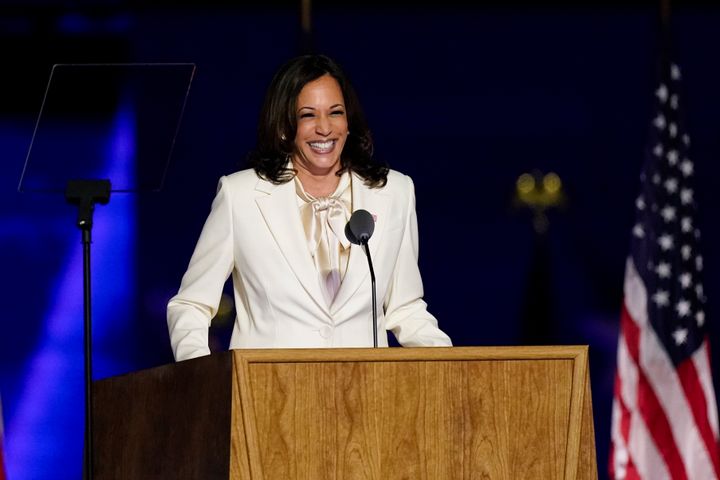 “Eighty minutes later, and four tailors exhausted, Maya did a fitting. It was perfect and she was ready to go to the stage,” Broecker continued, adding that the final detail of Jimmy Choo heels and an American flag pin pulled the ensemble together.

And, just to set the record straight, the “SNL” crew made it clear that they had no prior knowledge of Harris’ outfit before her speech. Turns out, they’re just that good.

“Even if we had a contact in Kamala’s camp, by the time they told us who designed it, the stores would be closed and it would be way too late to source it,” Richards said.

Expect to see more of Rudolph as Harris in the future, as the comedian previously said she’s “here for” portraying the vice president-elect in sketches for years to come.

“I’ve loved playing her, and also just being aligned with her and her campaign,” Rudolph told The Associated Press last month, adding, “It feels like being on the side of the good guys.”