Judit Polgar might be the one woman in the world who knows how Beth, the heroine of the hit Netflix series “The Queen’s Gambit,” really feels. Like Beth, Polgar, who is from Hungary, stood out during her career because she regularly beat the world’s top players, including Garry Kasparov in 2002, when he was ranked No. 1.

Polgar, the only woman to ever be ranked in the Top 10 or to play for the overall world championship, retired from competitive chess in 2014. Watching the series, which she described as an “incredible performance,” gave her a sense of déjà vu, particularly in the later episodes.

But there was one respect in which she could not identify with Beth’s experience: how the male competitors treated her.

“They were too nice to her,” Polgar said. When she was proving herself and rising in the world rankings, Polgar said the men often made disparaging comments about her ability and sometimes jokes, which they thought were funny but were actually hurtful.

And no one ever resigned to her as Shapkin did to Beth in Episode 7 by gallantly holding her hand near his lips.

“There were opponents who refused to shake hands,” she recalled. “There was one who hit his head on the board after he lost.” 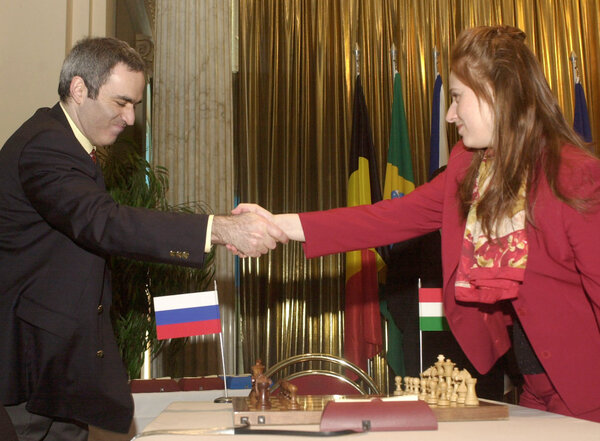 Not every woman has had negative experiences. Irina Krush, who won her eighth United States Women’s Championship last month, said that she felt as if the chess community and men in particular were very supportive of her when she was an up-and-coming player. She said of the series, “The spirit of what they are showing conforms to my experience.”

Whether what happens to Beth is typical or not, the popularity of “The Queen’s Gambit” has inspired anew a debate about inequality and sexism in chess and what, if anything, can be done about them.

Though chess would seem like one area where men and women should be able to compete on equal footing, historically, very few women have been able to do so. Among the more than 1,700 regular grandmasters worldwide, only 37, including Polgar and Krush, are women. Currently, only one woman, Hou Yifan of China, ranks in the Top 100, at No. 88, and she has been playing infrequently, even before the pandemic.

The superiority of men in the game is so well established that the best female players have freely acknowledged it. In a recent issue of Mint, in an article titled, “Why Women Lose at Chess,” Koneru Humpy, an Indian player currently ranked No. 3 among women, said that men are just better players. “It’s proven,” she said. “You have to accept it.”

The dearth of women at the top of the game is one reason that there are separate tournaments for women, including a world championship; the World Chess Federation even created titles for women, such as women grandmaster.

Having such institutionalized, second-class status might seem like a bad idea, but not according to Anastasiya Karlovich, a woman grandmaster who was the press officer for the World Chess Federation for several years. She said that the women’s titles permit more female players to earn a living as professionals, thereby increasing their participation in the game.

Karlovich said that the Netflix show has helped her indirectly: It has made the parents of her chess students look at her differently. “They have more respect for me. They understand better the life of a player,” she said.

While some men have speculated that the reason there are so few top female players is because they are not wired for it — Kasparov once said that it is not in their nature — women think the overriding reason is cultural expectations and bias.

Polgar said that society and even parents can undermine their daughters’ efforts to improve, though, in her case, her parents, in particular her father, did the opposite: They started teaching her chess when she was of kindergarten age. Polgar also has two older sisters, Susan, who became a grandmaster and women’s world champion, and Sofia, who became an international master, to blaze the way and support her.

Elizabeth Spiegel is an expert, a level just below master, and has taught chess for two decades at I.S. 318, a public middle school in Brooklyn that has won dozens of national championships. She believes that cultural stereotypes definitely affect how people learn and play chess. She noted that boys tend to be overconfident, but that is more of a strength than a flaw in chess. On the other hand, during class, when girls answer her questions, they often begin, “I think I am wrong, but …”

Krush said that the cultural cleaving between boys and girls happens at a young age. Scrolling through the lists of the top players in the United States who are 7, 8 and 9, Krush pointed out there are only a small handful of girls in the Top 10.

That creates and reinforces another problem that discourages women’s participation: too few social contacts. Jennifer Shahade, a two-time U.S. Women’s Champion who has written two books about women in chess (“Chess Bitch” and “Play Like a Girl!”) and is the women’s program director at the U.S. Chess Federation, said teenage girls tend to stop playing chess because there are so few of them and they want the social support. That Beth is a loner is likely an important reason she does not quit playing in tournaments.

Shahade said she actually did quit for a while, at about age 12, even though she came from a chess family. Her father, Mike, was a master and her brother, Greg, became an international master.

“I was self-conscious,” Shahade said. “My brother was super talented and had become a master so early and so easily. I was a much slower learner.”

Shahade, who grew up admiring Polgar, said it was “totally inspiring” to see Beth’s story unfold. Like Beth, who loses all her games to Benny the first time they play speed chess, she prefers slow, or classical, chess.

Of 74,000 members in total, the U.S. Chess Federation said it has about 10,500 female members. Shahade wants to increase that number, as well as their participation. To that end, Shahade and the federation started an online chess club in April to keep female players engaged during the pandemic. In the last few weeks, there have been between 80 and 140 participants, with quite a few older players. The last meeting also had a special guest: Kasparov, who has become a big booster of women’s chess since his retirement from competition in 2005. He was also a consultant on the Netflix series.

To keep the momentum going, Shahade is launching a new online group called the “Madwoman’s Book Club.” The title refers to a pejorative name used for the queen in the 15th and 16th centuries after it became the most powerful piece on the board. The first meeting this Friday already has 100 people signed up.

The subject of the discussion should come as no surprise: “The Queen’s Gambit” by Walter Tevis, the book on which the Netflix series is based.