Three years ago, after the Woolsey Fire, 53-year-old Greg Kochanowski returned to the Santa Monica Mountains and drove past his own street without recognizing it.

The most destructive wildfire in Los Angeles County history had torn through his Seminole Springs neighborhood, burning more than half of the area’s homes to the ground, including his. What remained was “a moonscape,” he said — ash and char, black and gray.

Losing his home was traumatic. But losing his bearings in his own neighborhood “scared the hell out of” him, Mr. Kochanowski remembered, and triggered new existential concerns about climate change.

Now he agonizes over his 14-year-old daughter’s future. “What kind of a world will Ava grow up in?” he said. “Will Southern California be uninhabitable when she is my age?”

Mr. Kochanowski’s sense of dread fits into an array of sentiments often called climate anxiety, a term that includes anger, worry and insecurity stemming from an awareness of a warming planet.

“I actually think many people have been experiencing this silently and privately for a number of years,” said Renee Lertzman, a climate psychologist and consultant to businesses and nonprofits. But “the conversation is no longer marginal. It really has burst through.”

Evidence that climate change threatens mental health is mounting, according to a recent report from Imperial College London’s Institute of Global Health Innovation. Higher temperatures are tied to depressive language and higher suicide rates. Fires, hurricanes and heat waves carry the risk of trauma and depression.

Cascading climate-driven disasters have forced American Red Cross volunteers to stay in the field for months, rather than weeks, said Trevor Riggen, who runs the group’s domestic disaster programs. He noted that because of climate change, the Red Cross has been shifting from a focus on immediate trauma, “to this more chronic condition that needs a different type of mental health intervention, or spiritual care.”

Young people, especially report feeling debilitated by climate anxiety and being frustrated by older generations. “They try to understand, but they don’t,” said 16-year-old Adah Crandall, a climate and anti-freeway activist in Portland, Oregon. “I am scared for my future because of the inaction of adults in the past.”

Today, when the humidity drops, Mr. Kochanowski sees the anxiety on his neighbors’ faces. Hot days stretch across more of the year and dewy, cool mornings are rare. Sometimes, he wonders if they should move on.

“You realize the larger forces that have always been beyond your control,” he said. “That level of realization makes you feel a little helpless.”

Andi Poland, 49, a technical recruiter who lives near Denver, said she too experiences anxiety, grief and dread about a hotter planet. “I am glad that I am short for this earth,” she said. “I figure I have one-third of my life left. I am not upset that I only have that much time.”

But experts say those dark emotions can also be the basis for empowerment — and progress. Writing in The Lancet, researchers recently argued that climate anxiety “may be the crucible through which humanity must pass to harness the energy and conviction that are needed for the lifesaving changes now required.”

Your feelings about climate are justified.

Anxiety is a rational response to the growing risks of climate change, according to Merritt Juliano, a therapist in rural Maryland and the co-president of the Climate Psychology Alliance North America. But we shouldn’t hide from it or ignore it.

“Our emotions are not something to be solved,” Ms. Juliano said. Rather than shove concerns about climate away, people need to identify them and realize they are there for a reason. “Embracing them makes us that much stronger.”

Connection to other people is key.

In one poll of 1,000 people by the American Psychiatric Association, more than half said they’re concerned about the impact climate change is having on mental health. You don’t have to survive a hurricane to experience climate anxiety, said Britt Wray, a post-doctorate fellow who studies the mental health impacts of climate change at Stanford University. Suffering a longer mosquito season in Pennsylvania, seeing orcas disappear from Puget Sound or simply reading about catastrophic flooding in Germany can prompt a deeper emotional reaction to changing climate.

As the pandemic made clear, when people don’t talk about anxiety, the resulting isolation can lead to depression, Dr. Lertzman said.

Informal gatherings called climate cafes, organized across the country and world, aim to bring people together to share feelings and reactions to the climate crisis. Other groups combine community with action.

The nonprofit Good Grief Network offers support for climate distress through a 10-step process, introduced at weekly meetings that culminate with a commitment to “reinvest in meaningful efforts.”

Bradley Pitts, a 43-year-old artist, says his climate-related emotions have offered him “opportunities to engage in decisions in a different way.” After attending Good Grief meetings, he and his wife have shifted personal choices toward adapting to and mitigating climate change. They purchased an old commercial farm in upstate New York, and committed to returning it to meadows and forestland.

After reckoning with climate anxiety, Pitts said, “Sitting on the sidelines is no longer an option.”

Action is the antidote to anxiety.

“We don’t see any single approach as a silver bullet” against climate anxiety and inaction, said Sarah Jornsay-Silverberg, the Good Grief Network’s executive director. Instead, the goal is to do things, small or large, that mean something to you, and reflect the internal shift in your outlook. 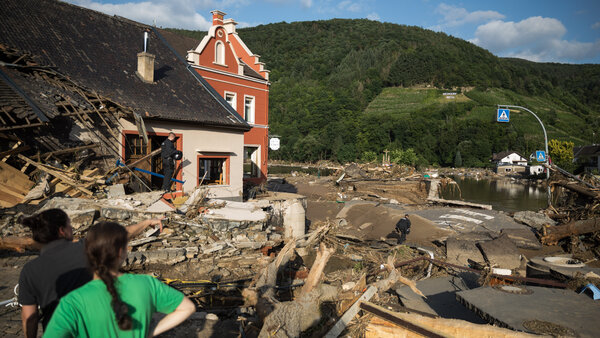 What to Do About Climate Despair

The antidote for anxiety is meaningful action.

For instance, people often associate energy efficiency with turning off lights, but a single use of a clothes dryer uses as much electricity as running a standard LED bulb for 13 days.

ReWild Long Island promotes biodiverse alternatives to traditional lawns, which volunteer Charlie Sacha calls “America’s biggest and most wasteful crop.” Ms. Sacha, 17, is a Manhasset High School senior; she said that she had her first anxiety attack in 2018, after reading that greenhouse pollution must be reduced by 45 percent by 2030 to prevent a dangerous 2.7 degrees of warming.

“I don’t have that much power to do things on a grand global level,” she said. “But you can quite literally make a change in your own backyard.”

Some people join local “buy nothing” groups in order to minimize the heavy carbon footprint of shipped purchases. Others work to get climate-aware politicians elected.

Whatever you do, make it stick.

The very thing that fuels your anxiety — your imagination — may also be your most powerful tool to overcome it, said Dr. Wray.

In California, Mr. Kochanowski said the Woolsey Fire and the anxiety that followed have reframed his work. A landscape architect, he’s establishing what he calls a research laboratory to promote more radical climate-adapted building and design.

Mr. Kochanowski knows that fire is essential to the oak woodlands and chaparral of his home — over the past two decades, fire has forced his family to evacuate three times. But they love their neighborhood, and believe they can help adapt it to a new climate reality.

Using noncombustible materials and sustainable defensible space, they have rebuilt. And next to their new home, they planted a flowering tipu tree, which can spread a canopy of shade within just a few years. “The idea was, we’re not going to be defeated by this thing,” he said.

Molly Peterson is a Los Angeles-based investigative journalist who focuses on the intersections of climate, catastrophe and public health.