After pleading guilty to charges of soliciting prostitution from an underage girl, Jeffrey Epstein spent part of 2011 reintroducing himself to elite society. A March 2011 dinner with the most powerful figures in tech showed just how connected he was. 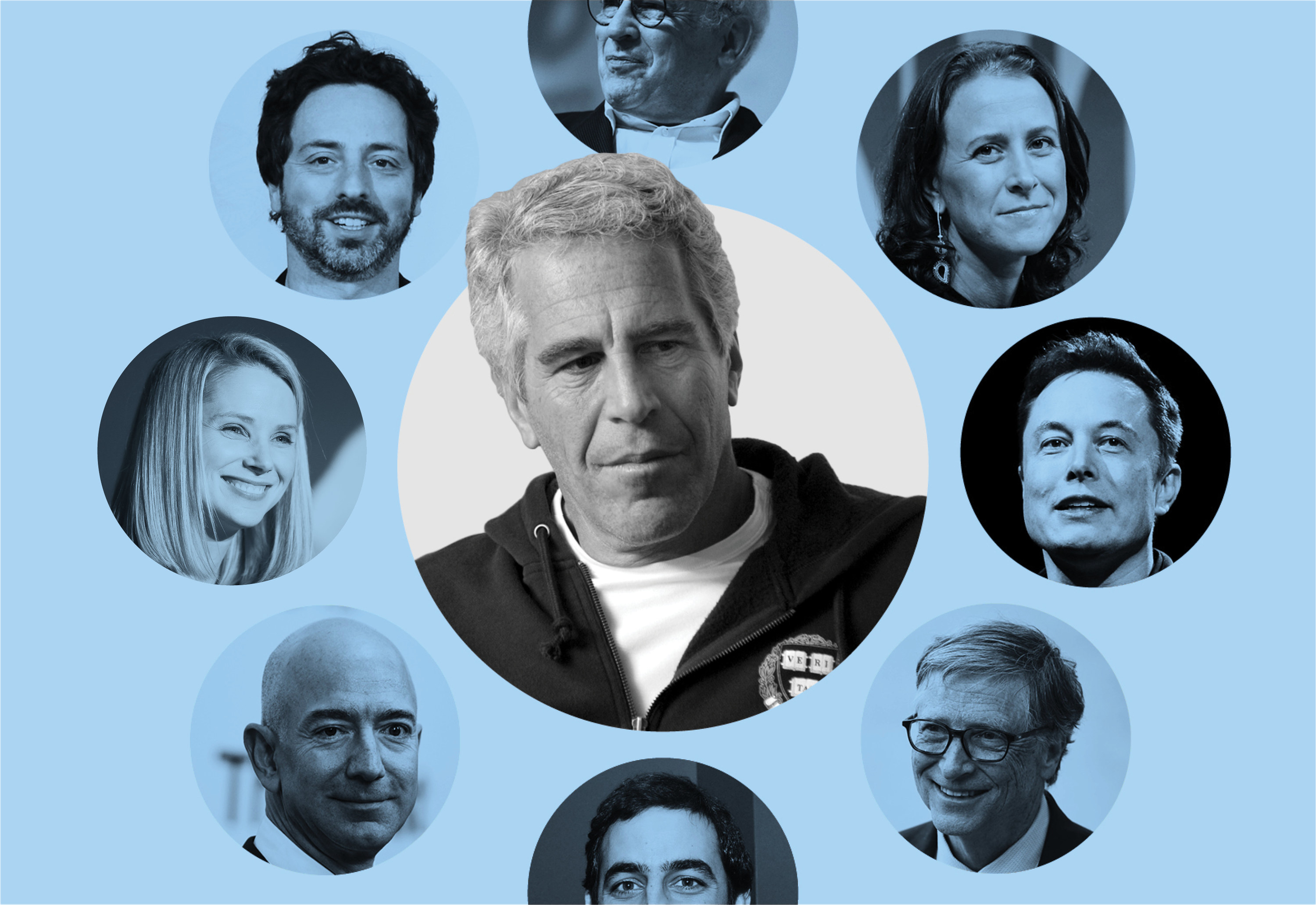 In March 2011, a group of technology executives gathered in a private dining room at an upscale Italian restaurant in downtown Long Beach, California, for a meal and some conversation. Amazon CEO Jeff Bezos, Tesla CEO Elon Musk, Google cofounder Sergey Brin, and others were all in town for TED, the annual conference with the slogan “ideas worth spreading.” They were among friends at an annual event called the “billionaires’ dinner,” without a retinue of handlers and hangers-on.

Yet when the event was later immortalized online, at least one infamous individual was missing from the names of the masters of the universe who had gathered for the evening: the convicted sex offender Jeffrey Epstein.

This elite dinner, and another similarly select gathering that Epstein attended later that year, were both organized by the New York literary agent John Brockman, whose exclusive intellectual club, called Edge, seems to have played a role in Epstein’s efforts to regain credibility and influence in circles of the rich and powerful. At the time, he was less than two years removed from finishing a 13-month prison term in a Florida state jail for soliciting prostitution from an underage girl.

The months following Epstein’s release from prison would be crucial for the disgraced financier as he began his reacclimation to the uppercrust social circles he had occupied before his arrest. In late 2010, Epstein reportedly hosted a dinner for celebrities and Prince Andrew at his Upper East Side mansion, and by the next year he was once again mingling with Brockman, an über networker among the elite of tech, science, and Wall Street.

With a goal to “seek out the most complex and sophisticated minds, put them in a room together, and have them ask each other the questions they are asking themselves,” Brockman’s Edge Foundation had previously welcomed Epstein as a patron to the sciences.

Before his 2006 arrest, Epstein attended at least three Edge billionaires’ dinners and was mentioned in a write-up on the Edge website of the 2004 event.

In the early 2000s, the Edge dinners were a place to be seen by members of the digerati and attended by reporters from several media outlets. In 2011, after Epstein had been released from a Florida jail, it was an exclusive gathering, dominated by tech industry leadership. A gallery of photos taken at the event by Nathan Myhrvold, formerly Microsoft’s chief technology officer, named 20 guests, including just one media representative: New York Times columnist David Brooks.

Epstein wasn’t named in the photos posted on the Edge website, but he appears in the background of a snap of Zack Bogue, a venture capitalist and husband of Marissa Mayer, then a vice president at Google. (The New York Times mentioned this photo in passing in its July story about Epstein’s reentry into powerful social circles after his release from jail.) 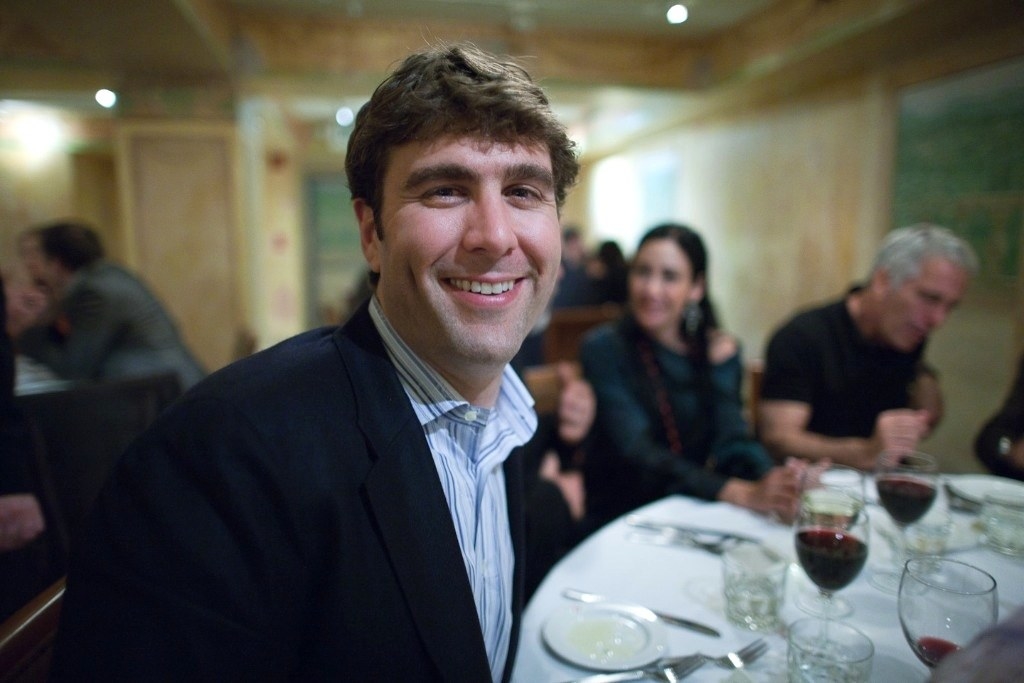 Other photos show the participants mingling before or after taking their seats. Also present were Bezos; Musk; Brin; Salar Kamangar, then CEO of YouTube; Mayer, who the following year left Google to become CEO of Yahoo; and Anne Wojcicki, Brin’s then-wife and CEO of genetic testing startup 23andMe.

This was not the first time that some of these tech titans had rubbed shoulders with Epstein at Brockman’s billionaires’ dinners: Bezos and Brin — along with fellow Google cofounder Larry Page — are listed on the Edge website as attending in 2004, and the Amazon CEO was at the 1999 event, both of which Epstein also attended.

Despite Epstein’s notoriety following his conviction, multiple attendees present at the small gathering in 2011 stated they did not know him then, or do not remember his presence now.

“I did not know Jeffrey Epstein was there,” said Bogue, who was photographed sitting three places away from the ex-convict financier at the 2011 event. “I don’t think I spoke to him at that dinner. I don’t believe I have ever met him, either at that dinner or anytime else.”

Through a spokesperson, Bogue’s spouse, Mayer, said she did not recall seeing Epstein at the dinner. That sentiment was echoed by Craig Mundie, another dinner attendee, who served as Microsoft’s chief strategy and research officer until 2014. Mundie said in an email that he had been invited by Brockman and had no recollection of meeting Epstein at the event.

Myhrvold, another former Microsoft executive, sent a statement to BuzzFeed News denying any “knowledge of or any involvement in the various crimes that Mr. Epstein is accused of committing” or financial connections to his money management business.

“Back in the day Epstein was a regular at TED conferences and he was a large donor to basic scientific research, so while Nathan knew him and has socialized with him, that’s exactly where their association ends,” his spokesperson said.

Brooke Hammerling, a communications and public relations specialist who deals with high-profile tech executives, did not attend the dinner but said she had been long aware of Brockman’s events around TED. She said it was hard to believe that executives of high profile companies would go in blind to an intimate dinner, particularly when many have staff who prepare them ahead of time with briefing books on who will be attending events.

“If you’re the CEO of a publicly traded company, your responsibility is to be prepared and not to have any surprises,” she said.

Brooks, the New York Times columnist and the only journalist photographed at the event, said he had not heard of Epstein in 2011 and only learned of the financier and his past following the Miami Herald’s investigation last year. He too had been invited by Brockman, but said he was not aware of who would be attending the dinner, and was “surprised” at its “high powered group of people.”

A Tesla spokesperson declined to answer queries about the event and instead questioned BuzzFeed News’ “journalistic integrity.”

Brin and Bezos did not respond to BuzzFeed News’ inquiries.

Epstein attended a second exclusive Edge event in July 2011, held over a weekend at a winery in St. Helena, California. There, he mingled with a handful of leading scientists and several science journalists, plus wealthy power brokers including Sean Parker, former president of Facebook, and Nicholas Pritzker, a venture capitalist and former CEO of the Hyatt Development Corporation. His venture firm invested in Uber, Tesla, and SpaceX and he is now on the board of vaping startup Juul Labs.

The meeting was billed as a “master class” on the science of human nature. Participants got a preview of Harvard psychologist Steven Pinker’s book The Better Angels of Our Nature, on the decline of violence in human societies, released a few months later. Epstein was captured on video sitting next to Pritzker and laughing as Martin Nowak, who received $6.5 million from Epstein in 2003 to launch his Program for Evolutionary Dynamics at Harvard, explained how sexual reproduction generates “noise” in models of the evolution of cooperative behavior.

Jeffrey Epstein, wearing glasses to the right, seated next to Nicholas Pritzker, laughs at Martin Nowak’s comment about sexual reproduction.

“Sean does not have a specific recollection of that event,” a spokesperson for Parker told BuzzFeed News. “He did not meet Jeffrey Epstein at that time, but he also would not have been aware of who he was in 2011.”

A spokesperson for Pritzker told BuzzFeed News by email: “He has no memory of having any knowledge prior to the event of the identity of any attendee including Mr. Epstein and if Mr. Pritzker was seated next to Mr. Epstein at the small gathering, it would have been purely coincidental. There were discussions among the attendees as a group on the subjects presented, but Mr. Pritzker does not recall any specific conversations with Mr. Epstein.”

In 2009, Brockman had also suggested that “science philanthropist” Epstein should be invited to another exclusive event, the Science Foo Camp, organized by tech book publisher Tim O’Reilly and held annually at Google’s headquarters in Mountain View, California. 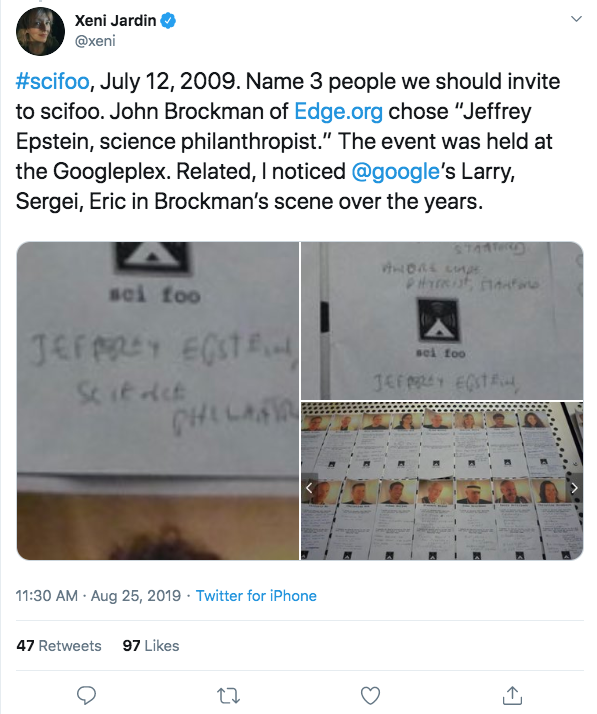 “O’Reilly does its own due diligence on anyone recommended,” Marsee Henon, program manager for O’Reilly Media, told BuzzFeed News by email. “As a result, Jeffrey Epstein was never invited to an O’Reilly Foo Camp.”

Since Epstein’s arrest in July this year on charges of sex trafficking, Brockman has declined to answer questions about Epstein and his own role in assisting the sex offender’s return to elite society. He did not respond to queries from BuzzFeed News about the two 2011 events. The financier’s profile was this year quietly removed from the Edge website, together with the pages for the 1999 and 2000 billionaires’ dinners, listed on Epstein’s profile. 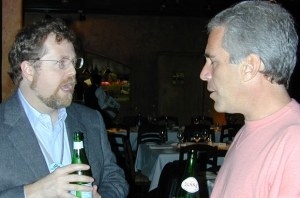 Those pages are saved on the Internet Archive, however. And less obvious links to Epstein, including the photo from the 2011 billionaires’ dinner, the reference to his presence at the 2004 event, and video from the 2011 Master Class, remain on the Edge website.

While Brockman was an important networker for Epstein, the disgraced financier apparently had his own contacts with another huge player in the tech industry: Microsoft cofounder Bill Gates. Last Friday, in a searing report on Epstein’s links with the MIT Media Lab, a hub for innovation in digital media, the New Yorker revealed an email indicating that Epstein in 2014 had “directed” a donation of $2 million from Gates to the lab.

A May 2013 email from physicist Lawrence Krauss, former head of the Origins Project at Arizona State University, also suggests ties between Epstein and Gates. (Epstein helped fund Krauss’s project at Arizona State, which brought together well-known scientists, intellectuals, and celebrities for public debates and other events.)

In the email, obtained by BuzzFeed News, Krauss invited hedge fund billionaire James Simons to attend a workshop on the origins of money being organized by Epstein at Arizona State. Krauss claimed that Gates, Virgin Group founder Richard Branson, and Lawrence Summers, formerly president of Harvard and Treasury secretary under President Bill Clinton, had already been brought on board by Epstein.

“Bill never committed to attend that event,” a source close to Gates told BuzzFeed News. “This is another example of how Epstein tried to associate himself with Bill.”

Gates, who was chairman of Microsoft until 2014, faced questions about his ties to Epstein last month after his former science adviser, Boris Nikolic, was named by Epstein as a backup executor for his will, signed two days before he killed himself in a federal detention center in Manhattan. Also last month, CNBC reported that Gates held a meeting in 2013 with Epstein to discuss ways to increase philanthropic giving.

“Epstein was introduced to Bill Gates as someone who was interested in helping grow philanthropy,” a spokesperson for Gates told BuzzFeed News by email. “Although Epstein pursued Bill Gates aggressively, any account of a business partnership or personal relationship between the two is simply not true. And any claim that Epstein directed any programmatic or personal grantmaking for Bill Gates is completely false.”

“Richard did not agree to an event at the University for this date – nor was he on board for this,” a spokesperson for Branson told BuzzFeed News by email.

While Epstein may have sought access to elite circles to rehabilitate his image, it is less clear that the rich and famous wanted to be publicly associated with him.

A manager at the Italian restaurant that hosted the billionaires’ dinner in Long Beach said she dealt directly with Brockman and was the only one allowed to check people in for the “hush hush” event. She wasn’t even allowed to save the list of attendees.

“After the event, they took the guest list and shredded it,” she said.