In France, Debates About the Veil Hide a Long History

BOURG-EN-BRESSE, France — Almost 500 years ago, in 1518 or 1519, the Flemish artist Bernard van Orley sat down to paint a portrait of Margaret of Austria, one of the most powerful women in Renaissance Europe. At age 3, she was queen of France. At 27, she became regent of the Netherlands, and Van Orley painted Margaret as a sturdy, composed politician in a portrait that would be copied across Europe.

Her lips are pursed. Her hands are poised, a rosary between two fingers. She squints, as if analyzing something. On her head, framing a face as burnished as porcelain, is a supple white wimple. It arches from the crown of her head and encloses her ears and neck; it expresses her fidelity to her late husband and, what’s more, her claim to his political authority. All the validity of her rule lies in that veil. It is piety, and it is power.

Margaret is buried in the Monastère de Brou, a palatial mausoleum she ordered built here in Bourg-en-Bresse, about 280 miles southeast of Paris. And her example serves as the trigger for a sparky and rangy exhibition there that takes a very wide-angle view on one of the most enduring and dispiriting controversies in contemporary French society.

The show, “Veiled and Unveiled,” steps back from France’s contemporary obsession with Muslim women’s dress to consider the many uses of head coverings in public and private life. With more than 100 works of art, from classical antiquity to the present, it reveals how the veil can serve contrasting and sometimes contradictory purposes, whether to mourn or to seduce, to protect one’s body or to signify one’s allegiances. 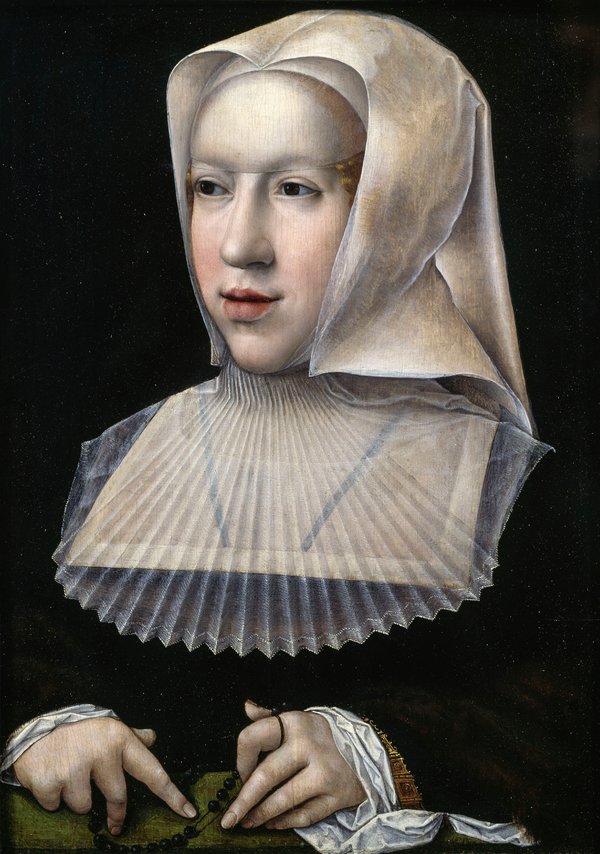 The veil can be religious or secular, a marker of patriarchal dominance or individual distinction. Above all, the show insists that the veil is not at all a “foreign” incursion into Europe, a mistake made by both serious writers like Michel Houellebecq and by a motley collection of populists, extremists and out-and-out racists. It’s omnipresent in the art and literature of Europe and the Mediterranean — and rediscovering its place in antiquity and in all three major Western religions might take a bit of the sulfur out of this country’s fixation on head scarves.

Since 1905, France has been an officially secular country, and it forbids all public employees from wearing outward signs of religiosity. But the veil in particular has especially exercised France since 1989, when three children were barred from attending middle school after refusing to take off their hijabs, setting off months of anguished, often hysterical public debate.

It was the first of countless “veil affairs,” and in this century successive French governments passed two laws: one from 2004 that forbids the veil (as well as the skullcap and large crosses) in schools, and another in 2010 banning full-face coverings such as the niqab in all public spaces. And the freakouts keep coming, most recently during a heat wave in France this week. After a group of women defied the city’s ban on the hooded “burkini” bathing suit at a community pool, a government minister for equality said the burkini sends “a political message that says, ‘Cover yourself up.’”

But long before it was doctrinal, the veil was a lay garment. One of the oldest and most fragile objects in “Veiled and Unveiled” is a terra cotta statuette from Cyprus made at the end of the fourth century B.C., on loan from the Louvre, that depicts a windswept young woman enveloped in a himation: a long mantle draped on the shoulder and, in this case, wrapped over the head against the cold. Veils became a mark of distinction for married Greek and Roman women (virgins were unveiled) and for centuries after, women, and indeed men, have used them as a secular accessory. Venetian women like the one in a 1775 etching by Giovanni David might wear the zendale, a black veil with a fringed face covering. Victorian women wore veils to shield their faces from the sun, which this show anachronistically evokes through a seductive portrait of Cate Blanchett in the film “An Ideal Husband.”

The Torah mentions veils sparingly, yet this show includes several paintings of Jews with covered hair, among them an 1885 painting by the Orientalist André Brouillet, featuring three Sephardic women with sheer white wraps over their colorful gowns. In the Quran, too, references to the veil are sparse.

But St. Paul, in the Epistles, explicitly calls for women — and women only — to cover their heads when praying, lest they tempt the other sex. This show pays too little attention to medieval and early modern Christianity, but it does suggest how European women could use the veil as an expression of luxury or a tool of seduction. In an 1802 portrait by Marie-Denise Villers, a gifted student of Jacques-Louis David, a coquettish young woman covers her head with a sheer black veil that was the height of fashion — but she’s bent over, retying her shoe, and beneath her veil lies substantial décolletage.

All this historical grounding serves the show well as it moves into the colonial era and toward Islam. French (male) painters, who would have learned the fundamentals of depicting drapery at the academy, took a special interest in the veil when they washed up in Algeria, Morocco or the Levant. It got lecherous fast, and numerous men saw the veil as an invitation to undress its wearer. A gross but compelling painting by the Orientalist painter Léopold de Moulignon, from 1860, features a (presumably imagined) Algerian beggar kneeling in the street, drawing a gray-green veil across the side of her face — and bearing her ample breast to her suckling child.

“Veiled and Unveiled” is a studious show. It’s intentionally low-temperature. It treads especially lightly in the 20th century, and does not push too hard at recent nationalistic and religious upheavals of the Islamic world. It also ducks the sometimes vitriolic disagreements among feminists as to whether the veil can only be patriarchal, and whether Western beauty standards offer any true liberation.

A 1957 photograph by Marc Riboud, in which glamorous bareheaded Tunisians line up to kiss the independence leader Habib Bourguiba, reminds us of the millions of Muslim women who reject the veil. Shirin Neshat, who photographed Iranian women wearing shapeless black chadors against the backdrop of a fantastical garden, is the one saving grace amid more or less terrible contemporary art.

But pulling back like this can help offer some better tools than the blunt ones that shape French debates over the veil, especially the spurious opposition of secular universalism and pluralist tolerance. The question is not whether France, and Europe, should or should not tolerate a garment that stands apart from “European” values. The question is how to build a society that sees its local and colonial histories as coextensive, that ties its national story to lives and cultures rooted beyond its borders — and that can understand both the veil and the refusal to wear one as already French in their own ways.

Veiled and Unveiled
Through Sept. 29 at the Monastère de Brou, Bourg-en-Bresse, France; monastere-de-brou.fr.

Jason Farago is an art critic for The Times. He reviews exhibitions in New York and abroad, with a focus on global approaches to art history. Previously he edited Even, an art magazine he co-founded. In 2017 he was awarded the inaugural Rabkin Prize for art criticism. @jsf