In Singapore, a #MeToo Play Sparks Discussion on Sexual Misconduct

SINGAPORE — Ken Kwek watched as investigations into Harvey Weinstein’s treatment of women in October 2017 ignited the #MeToo movement and led women across the globe to share their experiences of sexual abuse and workplace harassment.

Yet here in his home country, the conversation was more muted. In Singapore, a wealthy one-time British colony known for its glittering skyline and ethnic diversity, many still hold to another century’s view of the roles of men and women. Victims of sexual misconduct often face shame and blame, and the global reckoning seems far away.

Mr. Kwek, a playwright, decided it was time to bring this sensitive topic to Singapore. In May, his play “This Is What Happens to Pretty Girls” was performed to sold-out audiences, sparking a new wave of conversation yet it left some wondering whether a drama that put a stark spotlight on a persistent problem can prompt lasting change.

Sexual harassment “is as endemic a problem here as anywhere else, but it just manifests itself in a different way,” Mr. Kwek said. “In this part of the world, in Singapore, you are talking about a passive and nonconfrontational culture.”

“This is a big deal for Singapore,” said Danielle Pereira, a Singaporean lawyer and spokeswoman for a campaign by the Association of Women for Action and Research, or AWARE. “It really opens a dialogue,” she said.

In the wake of #MeToo, Singapore’s Sexual Assault Care Center reported a 79-percent surge in cases, as more women sought help privately. Yet few stories surfaced publicly and resistance to speaking up remained. Allegations of sexual misconduct cast a spotlight on the victim and her family, with the potential for dire career consequences.

Public sentiment continues to be largely skeptical of victims. A recent Ipsos survey of Singaporeans revealed that nearly 41 percent of respondents considered false accusations of sexual harassment a bigger problem in the country than unreported acts. In the United States, by comparison, a recent survey by the University of California, San Diego, found less than 10 percent of respondents said they believed people making high-profile sexual misconduct allegations were “purposely lying.”

Mr. Kwek, 40, has developed a reputation as a provocateur in Singapore, known for tackling fraught subjects that trigger discussion. In 2012, a film he wrote and directed, “Sex.Violence.FamilyValues,” was banned in Singapore over concerns that a scene was racially offensive.

“Pretty Girls” stems from Mr. Kwek’s work with Adrian and Tracie Pang, the husband-and-wife artistic directors at the Pangdemonium Theater Company, a prominent local troupe also known for taking on plays with difficult themes. In the fall of 2017, as they were working on a play that included a story of sexual assault as one thread of the plot, the headlines about Mr. Weinstein and others reverberated. The Pangs and Mr. Kwek decided to shelve the original idea and create a new production tackling #MeToo issues head-on.

Mr. Kwek, a former journalist at The Straits Times, used his skills as a reporter to shape the story. Over the course of several months he interviewed circles of friends and acquaintances then strangers until he had talked with about 100 women and men about their sexual misconduct experiences. Mr. Kwek also consulted with counselors at the Sexual Assault Care Center to learn about the manifestations of trauma.

Victims who feared that coming forward with their stories could jeopardize their reputations and careers felt more comfortable talking with Mr. Kwek, he said, knowing that their identities would be hidden behind a veil of anonymity and filtered through the lens of fiction.

Mr. Pang, who also acted in the play, said, “People are harboring these stories and are keeping them so close to our chest and having this need to speak up about it.” 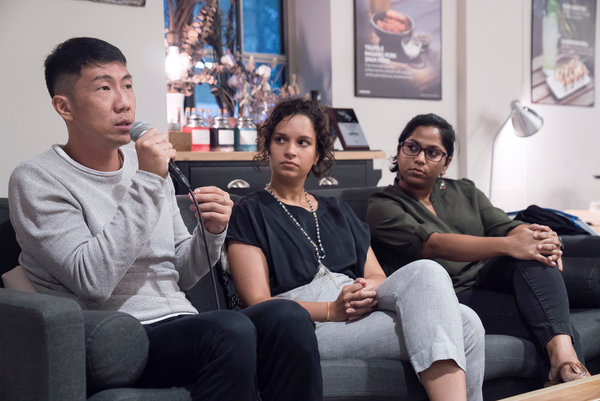 His wife, Ms. Pang, added: “They clearly don’t necessarily want their story plastered everywhere either. It is finding that ground that they are comfortable with.”

Mr. Kwek distilled the stories and created composite characters. Rather than presenting a black-and-white story with clear villains and protagonists, “Pretty Girls” exists in the gray zones.

Woven together are stories of a brash tech executive struggling with a childhood sexual assault; a young female engineer who faced retaliation after rejecting sexual advances from her boss; a student who pursues a professor and assaults her; and a radio host confronted by someone he assaulted in his youth.

“It is not a play about rape,” Mr. Kwek said. “It is a play about how people’s sexual behaviors lead to devastating emotional consequences.”

Broader themes emerge about the perils of toxic masculinity, the damaging effects of workplace sexual harassment, the meaning of consent and the perpetuating cycles of abuse. And while much of the #MeToo movement has focused on women’s stories of abuse, the play puts a spotlight on the role that men play.

“The onus is on men to take the movement seriously and process it and think about whether they have been culpable or complicit in some way,” Mr. Kwek said.

The play’s title was lifted from an interview Mr. Kwek conducted during his research — a line a female human resources executive said and one women have routinely been told when reporting workplace harassment — and was an attempt to provoke viewers to question the very notion. “There is a very dark bitter irony of the title,” Mr. Pang said.

Mr. Kwek and the Pangs said they were nervous about how “Pretty Girls” would land in Singapore, where media and entertainment are highly controlled by the government. In addition, they said that they were worried the play would polarize audiences, and that social media mobs would attack.

“My fellow Singaporeans are scary,” Mr. Kwek said, remarking on the socially conservative sentiment in society. “I am as afraid of my neighbors censoring me as the state authorities.”

Yet “What Happens to Pretty Girls” opened in May to critical acclaim, and during its 16-day run, the play sparked conversations about #MeToo issues in Singapore. Viewers took to social media to share their thoughts, and by the final week of performances the 615-seat theater was selling out. Some critics, though, said it raised a lot of questions but didn’t provide enough solutions.

One Sunday, after a matinee performance, a talk-back conversation with audience members covered several topics, including questions about consent, how to help survivors who don’t want to talk about their experiences and the value of an apology.

Mr. Pang said that even after the show closed, the theater company was flooded with feedback, including a note in recent days from a man who said he was able to open up and seek therapy about sexual abuse he suffered 33 years ago, when he was 10.

The play had a limited run, leading some to question whether it would unleash a broader discussion or whether those conversations would fade after the curtain fell. ”When it is such an isolated, short run, whether that in and of itself will have a lasting impact remains to be seen,” said Ms. Pereira, of AWARE.

The Pangs said they were considering whether the play could have a life outside Singapore. They may submit it to a theater festival in London.

“The subject matter itself is universal,” Ms. Pang said. “It is happening everywhere.”