On his last album, “Changing Same,” the composer and bandleader Joseph C. Phillips took up a challenge that had once been extended by the writer Amiri Baraka.

Combining elements of Schoenberg’s atonality with aspects of funk frisson, indebted to Curtis Mayfield, Mr. Phillips embraced what Baraka called “the digging of everything.” That meant doing away with hard distinctions between the experimental and the popular, as artists like Sun Ra and Albert Ayler had done.

While Mr. Phillips was finalizing plans for “Changing Same,” in 2014, Michael Brown, an 18-year-old Black man, was shot in Ferguson, Mo., by a white police officer.

As a Black man, Mr. Phillips was unsurprised. But as a soon-to-be father, he was newly disturbed. “There’s this beautiful thing, waiting for this change to happen,” he recalled in a recent interview. “Then, when you hear about what was going on with Ferguson, and Michael Brown, it’s like, what are we bringing this child into?” 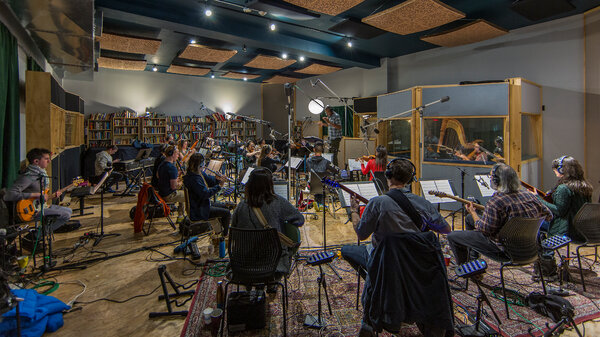 The intensity of the protests that followed the shooting prompted Mr. Phillips, 53, who teaches music to kindergartners in Brooklyn as his day job, to consider work that spoke directly to the moment: a new opera for a single soprano, joined by the members of his ensemble, Numinous. The results can be heard on “The Grey Land,” which was released this week on the New Amsterdam label. On it, you can hear Mr. Phillips’s newly expanded approach to “the digging of everything.”

At various points, this mono-opera (with Rebecca L. Hargrove on the recording and Kenneth Browning as narrator) nods to Samuel Barber and to Kendrick Lamar. One of the track titles comes from a line of dialogue in Quentin Tarantino’s film “Kill Bill.” In “Legion of Boom,” a reference to the Seattle Seahawks’s powerful defensive backfield, the early music of Philip Glass is easy to spot as an influence.

The longest movement of this operatic work is “Ferguson: Summer of 2014.” While the 19-minute piece includes breaking-news-style recitation of the events surrounding the shooting, it is not singularly focused on rebroadcasting previously reported facts. Crucially, these news-ticker sections alternate with a world of private pleasures (and private nervousness) experienced by a couple expecting a child amid the blasts of reportage.

The libretto for “Ferguson,” by the writer Isaac Butler, starts with a quotation from the James Agee text Barber used in “Knoxville: Summer of 1915” — “It has become that time of evening” — before relating the story of a couple with a child on the way. This section is, in large part, winningly melodic, even if harmonies from the winds occasionally suggest troubling vistas just over the horizon.

When the breaking news hits, in the 10th minute of the track, what has been a largely acoustic sound world is interrupted by dramatic and distorted electric guitar riffing. Yet the distinction proposed by this sonic shift — from pleasure to anguish, from chamber-music privacy to a loudly amplified public arena — is never completely binary. In that passage of harried guitar, you can also hear acoustic, Minimalist-style writing for winds and strings, helping connect the new music to some of the textures earlier in the piece.

Later in the track, those Minimalist lines come back, in a different guise. When the couple imagines leaving their phones and computers unplugged, and thus remaining disconnected from the news, the repeating string and winds figures reappear. This time, the motifs are delivered via heavily processed electronic tones. It’s as if digital signals from the world are hovering around the couple, waiting for them to log back on and face the latest grim news from Ferguson.

But you don’t have to be an expectant parent to appreciate the effect; many Americans are likely familiar with breaking news intruding on private joys. Without sacrificing the specificity of Mr. Phillips’s life and reactions, his piece has a capaciousness that can sometimes elude politically inspired works. This music dramatizes the effort involved in seeking and safeguarding individual satisfactions, without closing yourself off to the outside world.

The role of mothers takes on a steadily more prominent role as the “The Grey Land” proceeds. Mr. Phillips samples public comments made by women whose children were killed by police (“One Side Losing Slowly”). At other points, the character of the Black mother becomes more universal — as on “Don’t,” its lyrics by Mr. Phillips. Here, in list-poem format, we hear a series of cautions: “Don’t sit on the stoop, don’t play with toy guns, don’t listen to loud music.”

The music rebels against such well-intended limitations with a guitar part that Mr. Phillips compares to the ecstatic rhythms of Mr. Lamar’s lyrics for “Alright,” a song which was claimed as a protest anthem, after Ferguson. Sly humor is also on offer, as in “Agnus Bey,” a portmanteau of “Agnus Dei” from the Catholic Mass and a nickname bestowed on Beyoncé; Mr. Phillips is cheekily highlighting the catechisms of contemporary pop idolatry. His lyrics, rendered in Latin, translate this way: “Behold the Lamb of Bey. Behold the One, who slays the world. Blessed are thee, that receives the word of Bey.”

Throughout the album, Mr. Phillips can be heard rendering these varied cultural signals into a heterogenous work of art — but one that has a coherence the world often lacks. And this, in the end, seems like his latest understanding of “the digging of everything.” Sometimes that digging may involve appreciation; at other points, it is simply a process of documentation, or of profitably trying to sort one’s own complex feelings.

“New Black Music is expression,” Baraka once wrote, “and expression of reflection as well.” A work like “The Grey Land” serves as contemporary proof.