Amazon’s aggressive discounts in India have angered traditional retailers who say that online shopping is killing their business. 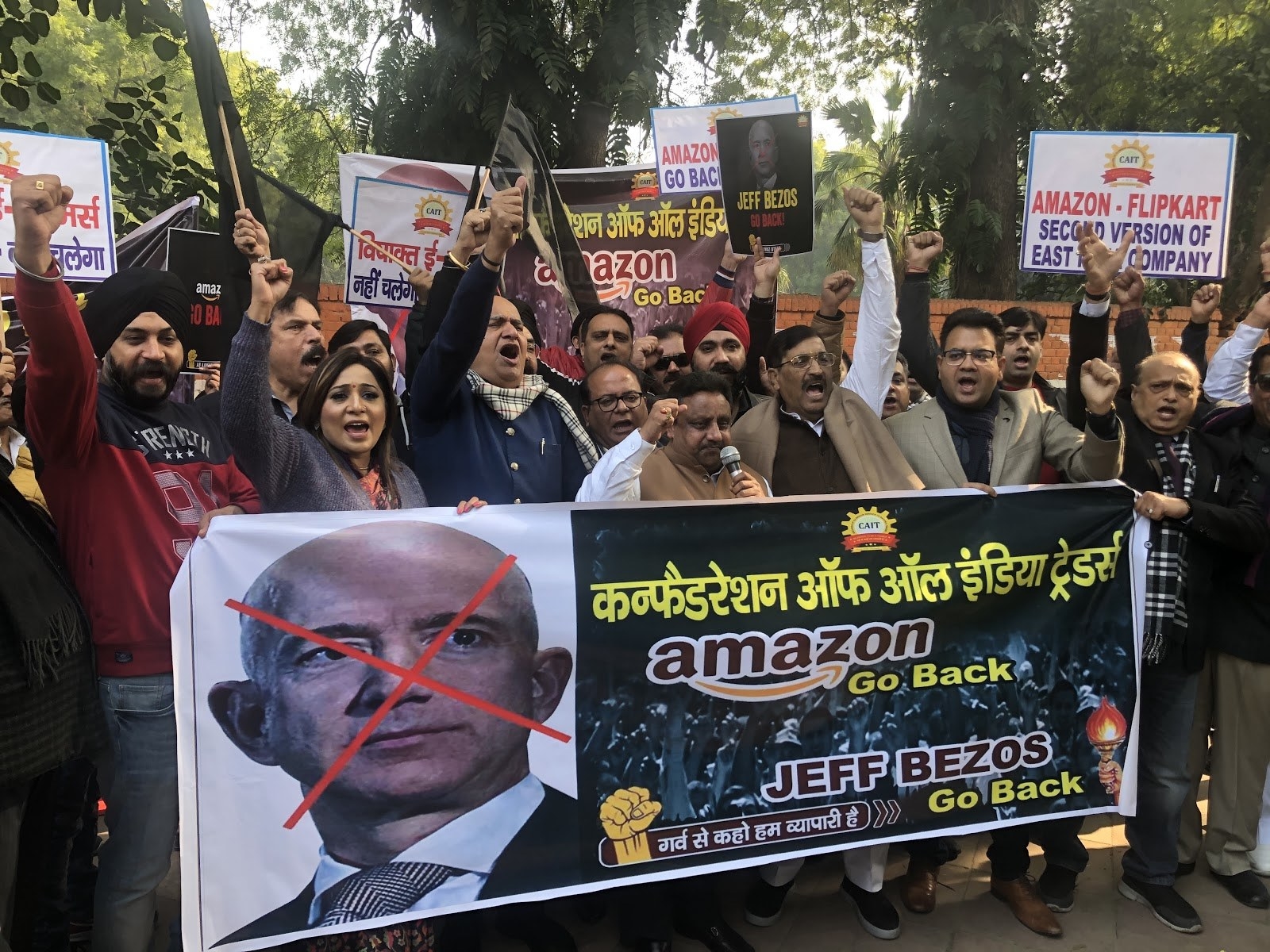 NEW DELHI — After he strode out on stage in front of a packed auditorium, Jeff Bezos shared some chit-chat with Amazon’s India head. “My grandfather made his own needles,” the Amazon CEO said about his childhood on a ranch in Texas. He talked about his interest in space —“a childhood passion”— and the climate crisis — “anybody today who is not acknowledging that climate change is real [is] not being reasonable.” Then, he made a surprise announcement.

Amazon, Bezos said, would invest a billion dollars over the next five years to bring more than 10 million small and medium Indian businesses online, and help them sell their products around the world.

“We’re going to use our global footprint to export outside of India,” Bezos said at the event, attended by representatives from more than 3,000 of the type of business Bezos said he wanted to help. 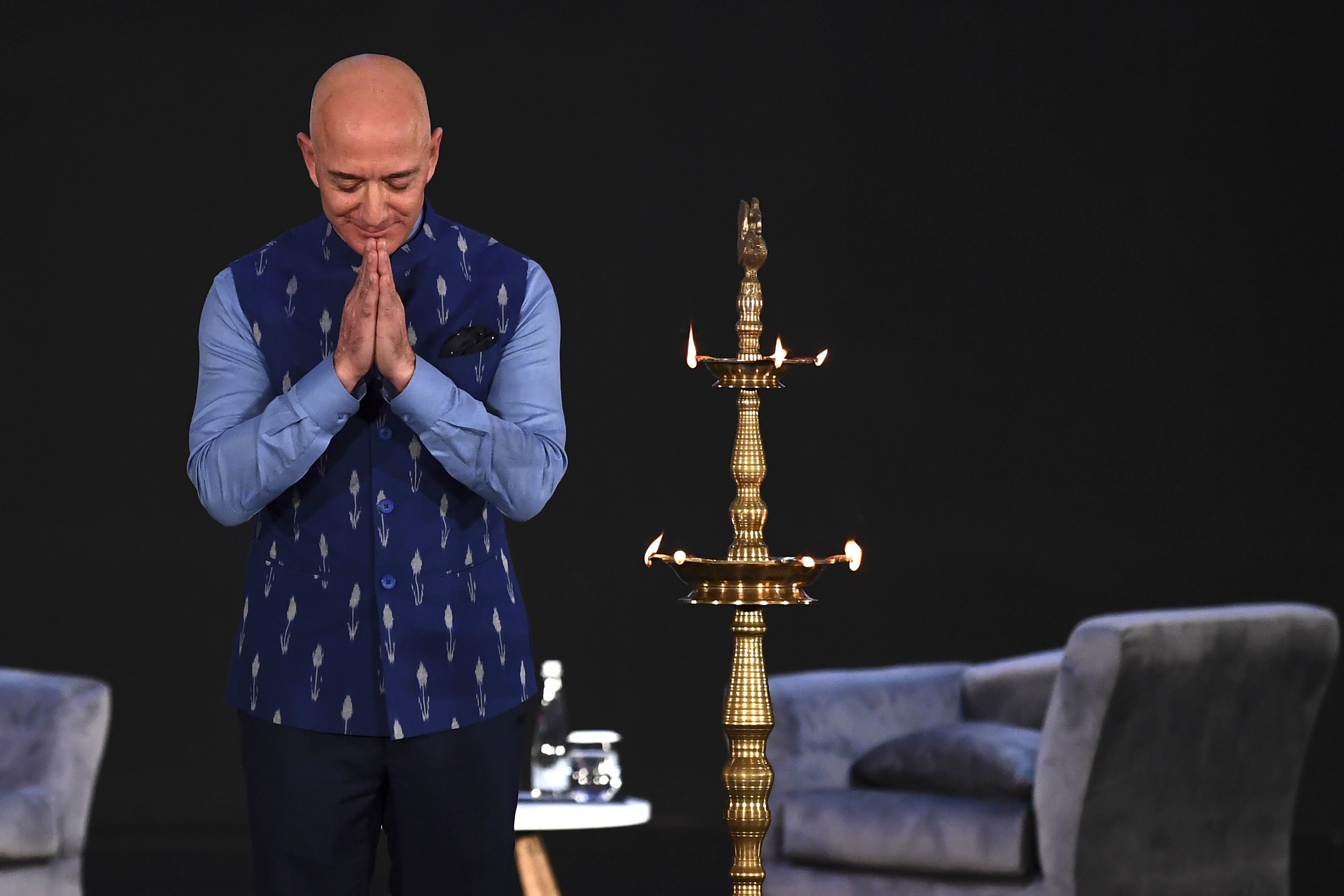 Amazon counts India as a key market for growth. When Bezos last visited the country in the fall of 2014, he dressed in a sherwani, traditional Indian festive attire, and posed for pictures standing atop a truck festooned with garlands, holding an oversized check for $2 billion, the amount Amazon had invested in India at the time. Since then, the company has invested an additional $3.5 billion in India, not counting the billion dollars announced on Wednesday.

Amazon’s aggressive expansion in India has kickstarted an e-commerce boom in a country where hundreds of millions of people have rapidly come online through cheap smartphones and data plans in the last few years, and where most people outside urban areas do not have access to large retail chains. But it has also angered millions of small brick-and-mortar businesses, who say that Amazon, and Walmart-owned Flipkart, which dominate online shopping in the country, are affecting their livelihoods by using their deep pockets to heavily discount products and undercut traditional retailers.

Small business owners in the country have also accused online retailers like Amazon of violating the country’s foreign investment laws. Unlike the US where Amazon sells directly to customers in addition to letting independent sellers list their products on the website, India’s laws require that foreign e-commerce companies function as neutral marketplaces selling only items listed by local independent sellers. Sellers say that Amazon and Flipkart get around these laws by holding majority stakes in third-party brands and selling their own products through them. They’ve also accused the companies of striking deals with smartphone makers that force them to sell their devices online exclusively and not in traditional retail stores.

Minutes away from the venue where Bezos was speaking, a few dozen of these retailers held up placards with Bezos’ face on them, shouting “Amazon go back!” The protest was organized by the Confederation of All India Traders (CAIT), which represents more than 70 million small, traditional merchants in India. CAIT claimed that similar protests were held across 300 cities in the country. 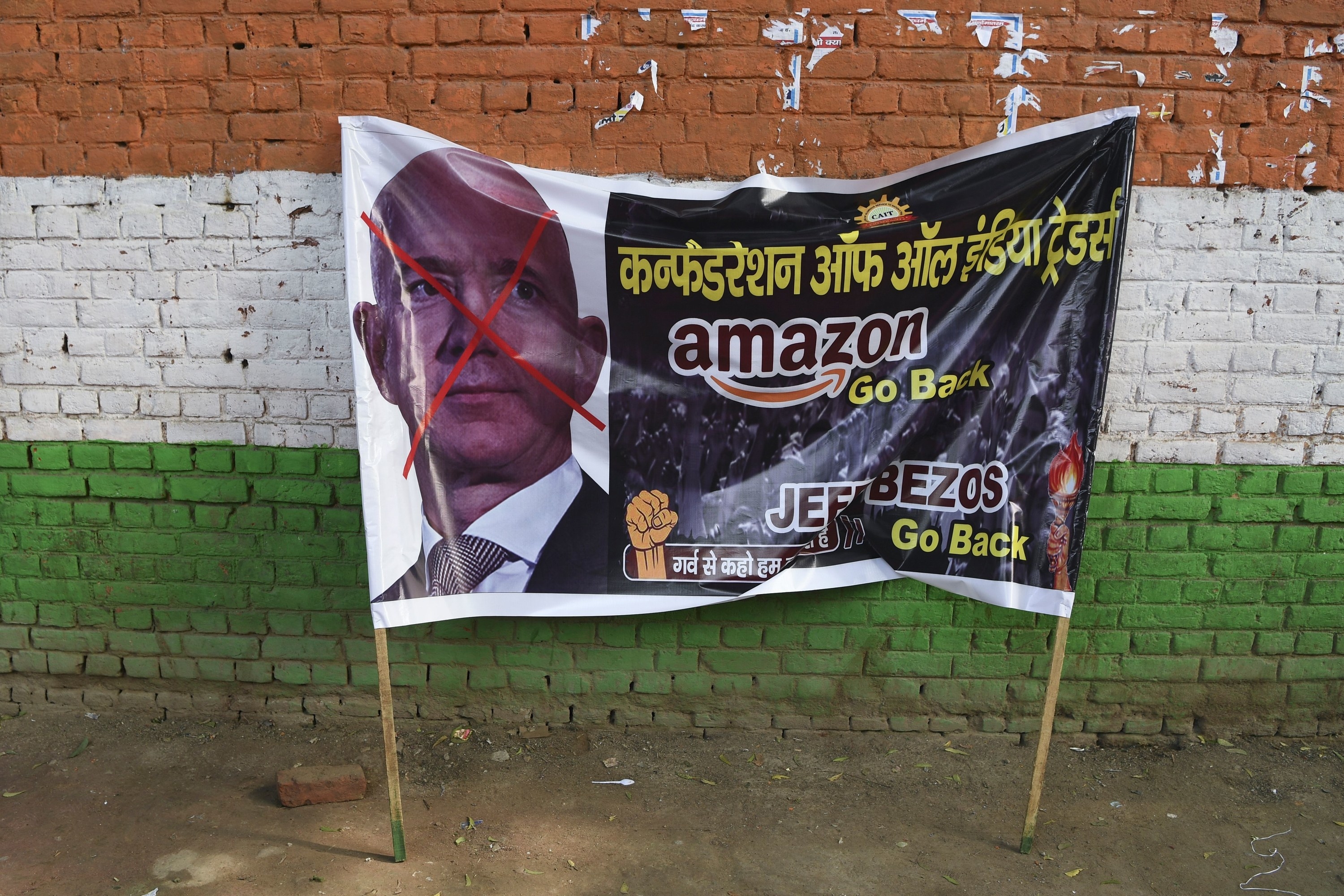 “The goal of Amazon and Flipkart is to bring in crony capitalism in India, dominate and monopolize the market, wipe out the competition, and leave consumers with no choice,” CAIT Secretary General Praveen Khandelwal told BuzzFeed News at the protest site. Khandelwal claimed that over 100,000 small retailers had been driven out of business thanks to Amazon and Flipkart’s deep discounting in the last four months alone.

Rahul Gupta, who has been running an electronics store for more than 18 years in Noida, a satellite city near New Delhi, told BuzzFeed News that he was at the protest because his business has halved in the last few months because of the deep discounts that Amazon and Flipkart offer. “Young customers, especially, only order online,” he said. “I can’t afford to sell products at the same prices as Amazon and Flipkart.”

On Monday, just days before Bezos arrived in India, the Competition Commission of India, the country’s antitrust regulator, announced it was launching an investigation to examine whether Amazon and Flipkart had violated these rules. Khandelwal said that the CAIT was happy with the investigation. “For the first time, these companies have come under the regulatory spotlight in India,” he said. Amazon is already under multiple antitrust investigations around the world, including in the European Union, which is examining whether the world’s largest retailer uses information from sellers on its marketplace to make decisions about its own brands on the platform.

When asked about Bezos’ latest billion dollar investment to digitize India’s small and medium businesses, Khandelwal said that cash infusion was to help Amazon continue to sell products at a loss by offering large discounts. “They’re trying to build a wrong and a false narrative here,” he said. “That’s not acceptable.”