And You Get a Shot!

President Biden announced on Tuesday that all American adults would be eligible to get a coronavirus vaccine by April 19, two weeks earlier than his previously stated goal.

“Or as Biden calls it: Operation Early-Bird Special,” Jimmy Fallon joked on “The Tonight Show.”

“When Joe Biden was running, he promised 100 million shots in 100 days, but we’ve blown past that barrier, baby. The U.S. is now administering about three million shots per day, on average. This administration is delivering pricks in arms. As opposed to the last administration, which delivered armed pricks.” — STEPHEN COLBERT

“Way to go, Joe! Getting it done early. Although, supporters of the previous president are quick to point out that he was able to finish his entire presidency a whole four years before his original goal.” — STEPHEN COLBERT

“You know more people are vaccinated when pajama sales go down and Spanx go up.” — JIMMY FALLON

“Despite warnings from health experts, the Texas Rangers had a full crowd of more than 38,000 people for their home opener. Yeah, when they walked in all of the fans got a Dr. Fauci bobblehead that only shook its head ‘no.’” — JIMMY FALLON

“Many of the fans were defiantly maskless. I like that adult men will go to a baseball stadium and wear a glove the whole game, for the one in 98,000 chance they might catch a foul ball. But a mask? No way, out of the question!” — JIMMY KIMMEL

“They just couldn’t wait to pee in a trough again.” — JIMMY KIMMEL

“You know how they kept the virus away? They did the wave and they just fanned it all the way to Arkansas.” — JIMMY KIMMEL

“It was a strange game. It was the first time umpires were trying to get themselves thrown out.” — JIMMY FALLON

“For those keeping score, the Rangers lost 6-2. So you can understand why the fans were excited: They only have 80 more chances this season to see the Rangers lose at home.” — STEPHEN COLBERT

Trevor Noah broke down the pros and cons of vaccine passports on Tuesday’s “Daily Show.”

What We’re Excited About on Wednesday Night 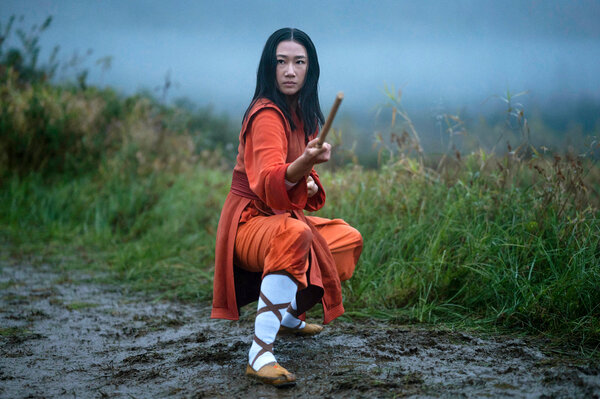 The CW’s “Kung Fu” reboot hopes to right the wrongs of its 1970s predecessor with a female lead and predominantly Asian-American cast.