President Trump’s would-be neighbors in Palm Beach, Fla., are opposing his plan to move to his Mar-a-Lago resort after he leaves the White House next month, citing the 1993 agreement Trump signed converting the property from a private residence into a social club.

“What an interesting turn of events,” Jimmy Kimmel said Wednesday. “This started with Donald Trump’s father, who made his fortune evicting people from their homes; now it ends with his son getting evicted from not one, but two houses in one month. In other words, God exists and has a very good sense of humor about all of this.”

“I hope he winds up sharing a duplex in New Jersey with Rudy and the ‘My Pillow’ guy.” — JIMMY KIMMEL

“OK, that is a low blow. Do you know how crushing it must be for Florida to reject you as a citizen? ‘Look, we’ll take the guy that kickboxes alligators, but that Donald Trump guy is too much.’” — TREVOR NOAH

“But, from the bottom of my heart, poor Trump, man. New York doesn’t want him, Mar-a-Lago doesn’t want him. The only places that would take him are states that he wants nothing to do with. I mean, if he actually tried to live in the heartland, he’d be on a flight to Saudi Arabia the next day. [imitating Trump] ‘This is my kind of place. Everything is covered in gold, and all the reporters are so polite. How do they enforce that? So great, so cool.’” — TREVOR NOAH

“It’s just amazing. New Yorkers don’t want him in New York, his neighbors don’t want him at Mar-a-Lago. This is like one of those ironic punishments for a racist on ‘The Twilight Zone’: ‘We do have a hacienda available in Mexico City.’ [imitating Trump] ‘No!’” — SETH MEYERS

“He’s going to be our first nomadic ex-president. Remember how everyone made fun of Hillary Clinton for taking a walk in the woods after she lost? Trump’s going to have to live in the woods. Years from now, a group of hikers are going to find him holed up in a cave with a long beard doing rallies for a bunch of pole cats: [as Trump] ‘We love the ferrets, don’t we, folks? Natural allies. But the skunks, how do we feel about the skunks? Not nice. Not nice, the skunks.’” — SETH MEYERS

“Neighbors are like, ‘This is a classy area. We can’t be associated with a one-term president.’” — JIMMY FALLON

“I’m not surprised nobody wants Trump living next door. Most neighbors ask to borrow some sugar; Trump’s like, ‘Can I borrow 400 million dollars?’” — JIMMY FALLON

“It would be ironic, though, if Trump does move there and then his neighbors build a giant wall next to him.” — JIMMY FALLON

“Can you imagine not being allowed to live somewhere in Florida? That’s dark, man. That’s dark.” — JAMES CORDEN

“Do you know where they want him to go? Far-a-Lago.” — JAMES CORDEN

The Punchiest Punchlines (All His Own Rants Edition)

“While he was on set, Cruise noticed two members — two crew members standing too close to one another in front of a computer screen, violating the movie’s strict Covid-19 safety protocols. Which, to be fair, are hard to see, because they’re ghost protocols.” — STEPHEN COLBERT, on Tom Cruise’s on-set Covid-19 rant

“Now some people are saying this is a bad look for Tom Cruise, but I disagree. Because, yeah, he’s mad, but it’s for a good cause. It’s like getting recorded screaming, ‘You guys are in big trouble if we don’t get these toys to the children’s hospital! I want to see happy kids, or you’ll never work in this town again!’ You’re angry, but for the right reason.” — TREVOR NOAH

“But for real, if anything, this should teach people just how serious this corona [expletive] is, because, remember, Tom Cruise is not scared of anything. This dude hangs off the side of a plane like it was any other Tuesday. He’s even brave enough to put his dirty shoes on a Black woman’s couch.” — TREVOR NOAH

“Yeah, wow. If Tom Cruise worked in the White House we could have had the vaccine back in April.” — JIMMY FALLON

“For the last nine months, that’s pretty much how Dr. Fauci has felt on the inside.” — JIMMY FALLON

“What’s amazing is when Tom delivered that rant he was hanging off a 163-story building.” — JIMMY FALLON

“Now, as intense as that sounds — and it does sound intense — that’s just the audio. He said all of that while halo jumping from a C-17 onto the minute hand of Big Ben. Yes, Tom Cruise does all of his own rants.” — STEPHEN COLBERT

“Now, the recording goes on for more than three minutes. Much like the ‘Mission: Impossible’ franchise itself, it gets kind of repetitive, but it never lets up on the adrenaline.” — STEPHEN COLBERT

What We’re Excited About on Thursday Night 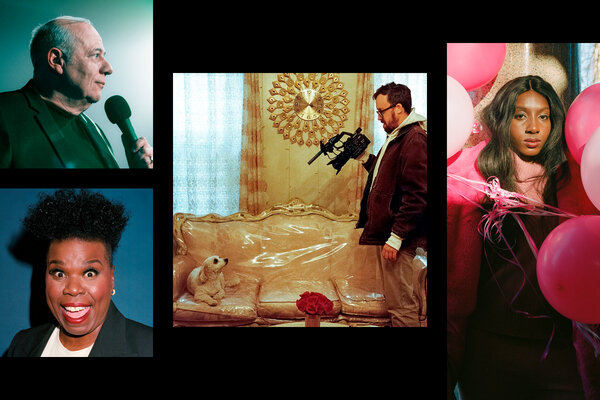 Leslie Jones, Hannibal Buress and Cole Escola were among the best comedians providing much-needed levity and laughter in an otherwise bleak 2020.