If you purchase an independently reviewed product or service through a link on our website, SheKnows may receive an affiliate commission.

The royal family may be keeping a stiff upper lip in public after Prince Harry’s recent round of interviews for his memoir, Spare, but behind the palace walls, they are reportedly reacting to his claims. Kate Middleton, who was once close to her brother-in-law, apparently is having a hard time digesting all of the private family stories going public.

The Princess of Wales now doesn’t know who to trust in the monarchy because Prince Harry was once a confidante of hers. “Kate feels that Harry’s actions are atrocious,” an insider told Us Weekly. “She is appalled at him for dragging her name through the dirt and is finding it hard to forgive.” Kate does get dinged a few times in the memoir from the leaked excerpts so far — from Princess Charlotte’s bridesmaid dress issue to shouting at Meghan Markle after she referred to Kate’s hormones during pregnancy — let’s just say Kate and Meghan were not designed to be besties.

What may upset Kate the most is that her perfectly curated public image is shattered by Harry revealing her behind-the-scenes personality. That might be the real reason she is finding it difficult to process how Harry is spreading his message — the royal family has a lot of issues to iron out. As royal expert Katie Nicholl noted to Page Six, “They’ve been taken aback by the level of detail and just how far Harry has gone in all of this.”

Harry’s memoir made things very real, very quickly for the royal family (LOLing that they were originally worried about the Harry & Meghan docuseries). It’s honestly going to feel odd if the palace doesn’t issue some kind of statement at this point because the damage is done — and silence sometimes feels like an acknowledgment that Harry’s allegations ring true.

Click here to see a complete timeline of Prince Harry and Meghan Markle’s feud with the royal family. 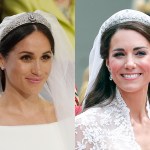