‘We Saw It Coming’

The hosts got serious on Wednesday, addressing the shootings in the Atlanta area that killed eight people, most of them women of Asian descent. Trevor Noah said angrily that America saw this coming.

“And what’s been sad about the story is not just the loss of life, but all of the auxiliary things that have been happening around the story, you know?” Noah said. “Like one of the first things that’s been the most frustrating for me is seeing the shooter say, ‘Oh, it wasn’t racism; it was sex addiction.’ First of all, [expletive] you, man. You killed six Asian people. Specifically, you went there. If there is anyone who’s racist, it is a [expletive] who killed six Asian women. Your murder speaks louder than your words.”

“And you know, in a way, what makes it even more painful is that we saw it coming. We see these things happening. People have been warning. People in the Asian community have been tweeting, saying: ‘Please, help us. We’re getting punched in the street. We’re getting slurs written on our doors. We’re getting people coming up to us to say, “Thanks for Covid; thanks for spoiling the world! Thanks!”’ We are seeing this happening, and while we’re fighting for it, there are many people who have been like, ‘Oh, stop being so woke, so dramatic. Kung flu, come on, ha ha ha, ha ha ha, ha ha ha! It’s just a joke.’ Yeah, it’s a joke that comes at one of the most tense times in human history.” — TREVOR NOAH

“Why are people so invested in solving the symptoms instead of the cause? America does this time and time again. A country that wants to fight the symptoms and not the underlying conditions that cause those symptoms to take effect — racism, misogyny, gun violence, mental illness. And, honestly, this incident might have been all of those things combined, because it doesn’t have to be one thing on its own; America is a rich tapestry of mass-shooting motivations.” — TREVOR NOAH

Stephen Colbert tied the shootings to the larger issues about immigration that the United States continues to face.

“The only answer that comes to mind is a simple but strangely difficult one these days, and that’s not to hate each other, to recognize our common humanity; to acknowledge that we’re a nation of immigrants. We might believe different things, we might not look the same, but we’re all Americans. We share a common belief that all men are created equal, and it is that belief itself that makes people want to come here.” — STEPHEN COLBERT

And on “The Late Late Show,” James Corden said the killings were a consequence of hateful speech.

“When you think about the casual racism that’s been pervasive over the past 12 months, then we can start to see the link between language and action. There are real consequences to repeatedly hearing hateful speech. People get hurt and people die. This mass murder is the product of a system that repeatedly leaves women of color and sex workers in a place where they are invisible. They are vulnerable and targeted. Identifying these actions as a hate crime isn’t just about semantics. And because this is a hate crime, it falls on all of us to address the hate.” — JAMES CORDEN

“Well, guys, I want to start off by wishing everyone a very happy St. Patrick’s Day. Yep, instead of Pfizer and Moderna, people just stayed home and did shots of Jameson.” — JIMMY FALLON

“Because of the pandemic, St. Patrick’s Day is very different this year. For instance, here in New York, they couldn’t hold the normal parade. They just had a small one to keep the tradition technically alive. And to ensure no crowds would show up, organizers invited Bill de Blasio.” — STEPHEN COLBERT

“Yep, all day we got to play a fun game: Drunk Co-worker or Bad Zoom Connection.” — JIMMY FALLON

“My question is, is it really St. Patrick’s Day if I can’t watch a guy on Fifth Avenue puke into a green hat at 8 a.m., you know? I mean, are we really celebrating when I can’t see a subway grate blow a kilt over a man’s head?” — JIMMY FALLON

Samantha Bee opened “Full Frontal” with a look into the recent rise in violence against women.

What We’re Excited About on Thursday Night 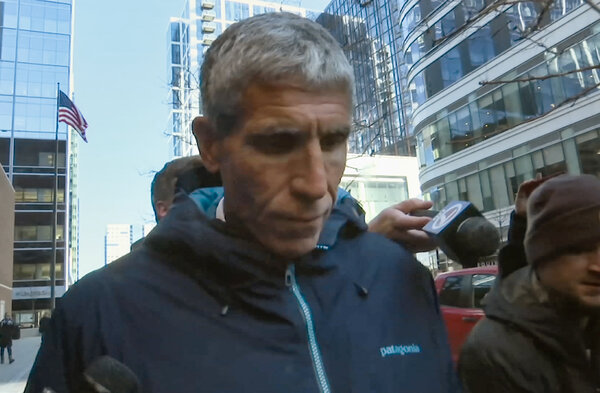