The director Lee Breuer, who over an influential half-century in New York’s downtown theater scene blended genres in productions of extravagant experimentalism, often with Mabou Mines, the avant-garde troupe he helped to found, died on Sunday at his home in Brooklyn Heights. He was 83.

His wife and artistic partner, the actress Maude Mitchell, confirmed his death.

A tenacious outsider who refused his sole Tony Award nomination — for his biggest hit and only Broadway show, the Sophocles adaptation “The Gospel at Colonus” — Mr. Breuer flourished in the scrappier realm of Off Off Broadway, even as the scale of his works and ambitions took him to larger stages, including the Brooklyn Academy of Music, the Delacorte Theater in Central Park and the Comédie-Française in Paris.

“How much of the game do you have to play, and how much can you play against the game?” he said in a 2011 interview. “That’s an enormous question, and it’s a question that’s been part of my life, always.” 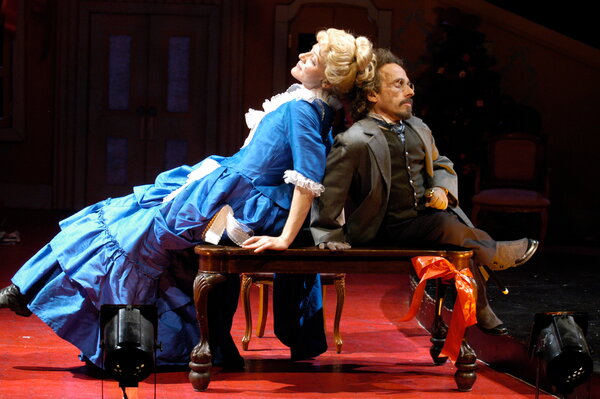 Most widely known in recent years for “Mabou Mines DollHouse” — a recalibration of Ibsen’s classic that opened at St. Ann’s Warehouse and toured internationally, with a cast of average-size women opposite men no more than four and a half feet tall — he reveled in colliding the comic with the tragic, the classical with the vernacular, layering in music and Bunraku puppetry.

Mr. Breuer’s audiences had to be willing to embrace, or at least shrug off, some quantity of abstruseness in his productions. Yet there was often a rapturous, cacophonous beauty to them. At their best — as in “DollHouse” (2003), which he adapted with Ms. Mitchell, who played Nora; the wondrous, child-friendly “Peter and Wendy” (1996), adapted by Liza Lorwin from “Peter Pan”; and the kaleidoscopic fantasia “La Divina Caricatura, Part 1, The Shaggy Dog” (2013), which Breuer also wrote — they worked on spectators like enchantments.

You can sense that effect in Margo Jefferson’s New York Times review of “Red Beads” (2005), a Mabou Mines production (written by Polina Klimovitskaya, with wind puppetry by Basil Twist) that she called “theater as sorcery; it is a crossroads where artistic traditions meet to invent a marvelous common language. It is a fairy tale, a puppet play and a chamber opera.” In other words, it was precisely the sort of juncture at which Mr. Breuer and his collaborators thrived.

Yet Mabou Mines, which he founded in 1970 with the actress Ruth Maleczech, the composer Philip Glass, the director JoAnne Akalaitis and the actor David Warrilow, got a less than auspicious reception that year when the Times critic Clive Barnes reviewed Mr. Breuer’s staging of “The Red Horse Animation” (text by Mr. Breuer, music by Mr. Glass) at the Guggenheim Museum.

Noting that the troupe had taken its name from a mining town in Nova Scotia, near where its members had rehearsed the piece, Mr. Barnes suggested that “they might have been more gainfully employed in mining.”

Esser Leopold Breuer was born on Feb. 6, 1937, in Philadelphia, the only child of Joseph Breuer, an architect, and Sara Leopold Breuer, a onetime newspaper columnist.

“I always wanted a brother or sister. I was always lonely,” Mr. Breuer recalled in an interview that appears in “Getting Off: Lee Breuer on Performance,” his 2019 book with Stephen Nunns.

It didn’t help that Mr. Breuer’s family moved frequently, or that in the process he skipped a few grades, making him younger than his classmates. At 16, he enrolled at the University of California, Los Angeles, where he majored in English and began writing plays. Ms. Maleczech — whom he would marry in 1978 and remain married to until her death in 2013, despite a decades-long separation and his having three children with three other partners — was in one of them.

A charismatic globe-trotter who was always hustling for the next project, Mr. Breuer bristled at the thought of having to be, as he once put it, “a good, middle-class bourgeois fellow.” Bohemianism was more to his taste. When he and Ms. Maleczech returned to the United States in 1970 after several years in Europe, part of the lure was the ease of getting welfare for six months while they made “The Red Horse Animation.”

In New York, Mabou Mines at first had one foot firmly in the art world. But the Off Off Broadway scene was percolating wildly, and by 1974 the company was part of A Bunch of Experimental Theaters of New York, Inc., a fledgling alliance whose membership reads like a roll call of downtown legends: Charles Ludlam’s Ridiculous Theatrical Company, Richard Foreman’s Ontological-Hysteric Theater, Richard Schechner’s Performance Group, André Gregory’s Manhattan Project, Meredith Monk/The House.

Unlike many of his peers, though, Mr. Breuer did not have a locked-in aesthetic. Mr. Schechner, who called him one last time on Sunday morning and told him that his work had affected millions — in the indirect, culture-nudging way that avant-garde theater can — said in an interview that Mr. Breuer’s range and curiosity made him stand out.

“I think his style was inquiry,” Mr. Schechner said. “Reason says two and two is four, and great art says, ‘Yeah, that’s the way it usually is, but two and two can be six, or three. And what happens if two and two is three, or six?’ Those are the kind of questions he asked.”

In the process, Mr. Breuer was a Pulitzer Prize finalist in 1985 for “The Gospel at Colonus,” with its composer, Bob Telson (they lost to “Sunday in the Park With George”), and won a MacArthur fellowship in 1997.

He also got some excoriating reviews from Frank Rich, then the Times’s chief drama critic, who panned his productions of “The Tempest” (1981); “The Warrior Ant” (1988); and “Lear” (1990), a gender-reversed Shakespeare adaptation with Ms. Maleczech in the title role.

Earlier iterations of “Colonus” had won the Obie Award for best musical and been filmed for the PBS series “Great Performances.” But Mr. Rich rejected the 1988 Broadway production, whose star, Morgan Freeman, he considered wasted in the show, and whose concept — Black Pentecostal choir as Greek chorus — he dismissed as “superficial, Ivy League bull-session cleverness.”

Mr. Breuer, for his part, was just about as contemptuous of Broadway.

Mr. Breuer staged a new, warmly reviewed production of “Colonus” for the Public Theater and the Onassis USA Foundation in September 2018, the summer when his long-precarious health took a further downward turn.

Days before performances began, he had a stroke during rehearsal at the Delacorte Theater that rendered him temporarily aphasic, Ms. Mitchell recalled in an interview on Monday.

“He gave the woman playing Antigone a piece of direction, and it was gobbledygook,” she said. “And then he wouldn’t leave, because he had an idea that he wanted to spend some time on.”

Even frail, he kept making art. In September, he and Ms. Mitchell — his partner since 1999, when they met at Sundance Theater Lab, and his wife since 2015 — went to Georgia to rework a Horton Foote piece about a dying woman, which he framed with music played by Egyptian gods. On Dec. 17, with advanced kidney disease and metastatic lung cancer, Mr. Breuer made his last revision to “The Fifth Voyage,” a riff on Jonathan Swift that he’d been writing.

In between, Ms. Mitchell said, he signed the contract to sell his archives to the Beinecke Rare Book and Manuscript Library at Yale.

Mr. Breuer is also survived by his daughter, Clove Galilee; his sons, Lute Ramblin Breuer, Alexander Tiappa Klimovitsky, Mojo Lorwin and Wah Mohn; and three grandchildren. All of Mr. Breuer’s children are artists and, like their mothers, all have collaborated with him.

And in recent weeks, Ms. Mitchell said, they gathered around, enveloping their father in dance and song.