PARIS — What would you pick as your last show before lockdown? The night before theaters closed for a second lockdown in France, slapstick suddenly felt appropriate.

The somber preshow mood at the Théâtre d’Atelier that evening in late October changed as soon as soon as the actors stepped out for “Purging Baby” (“On purge Bébé”), a one-act 1910 play by Georges Feydeau, the French playwright who took vaudeville to absurd, joyous extremes.

Émeline Bayart’s new production, bright and straightforward with its period-appropriate costumes, deserves much credit. It restored the musical interludes that were once a staple of vaudeville, and Bayart, who also played the lead role of Julie Follavoine, a mother worried sick because she thinks her son is constipated, brought special zest to a series of innuendo-filled songs.

Yet with restrictions looming, there was more to the masked audience’s wholehearted response than just the merits of “Purging Baby.” Around me, everyone lapped up Feydeau’s broken chamber pots and children’s tantrums more eagerly than I have ever seen, and when the curtain came down, the laughter turned into tears.

“You can’t imagine how much we’ll treasure your warmth and your applause,” Bayart told the audience, her voice strangled. In the row behind me, a woman sobbed as ushers oversaw our orderly, socially distanced exit. As with most shows here, there is no telling when “Purging Baby” will be back, although my fingers are crossed that performances will resume in France in December.

Laughter has been in such short supply in our pandemic-hit lives that comedy has taken on outsize meaning this year. When the world feels like a farce with no punchline, a good joke isn’t merely escapism. It can also be a source of catharsis, purging us — as Feydeau, whose witty plots rely on sowing chaos in the lives of ordinary people, would have it — of a little frustration.

In the short time French theaters were open after the start of the season, two outstanding productions met that need. The Chiens de Navarre, a collective founded in 2005, have arguably become France’s premier comedy troupe in recent years. Their work has always been steeped in improvisation, but in October, they went back to basics with an entirely unscripted production, “The Plague Is Camus, but Is the Flu Pagnol?” (“La Peste c’est Camus mais la grippe est-ce Pagnol?” — in French there’s a pun in there on the Spanish flu).

The setup at the Théâtre des Bouffes du Nord, the company’s frequent Paris residence, was simple. Six comedians sat around a table, with a dozen more on standby in the background. Regularly, members of each group swapped places, and anyone who stepped up to the table was expected to carry on with the group improvisation.

The results must have been very different every night, and the rhythm was uneven from one impromptu scene to the next, but watching the cast throw caution to the wind was hugely satisfying under the circumstances. On the day I attended, there were plenty of insider jokes about Paris theater figures and the French artists’ special unemployment program. Skits stopped and started abruptly, with silly costumes and a little clowning thrown in.

The Chiens de Navarre have welcomed new recruits and guests in recent years, and one issue will be how to sustain the stage chemistry that was a hallmark of the initial group of comedians. In “The Plague Is Camus, but Is the Flu Pagnol?” some of these veterans ran circles around the newcomers. Céline Fuhrer’s uptight stage persona and comic timing, in particular, are the stuff of absurdist dreams, and I found myself waiting for her return every time she handed over her table spot.

Other Chiens de Navarre alumni have opted to fly solo. In September, three of them, Thomas Scimeca, Anne-Élodie Sorlin and Maxence Tual, collaborated on a new production, “No Plowing Is Too Deep” (“Jamais labour n’est trop profond”), that felt like the postapocalyptic sequel to the Chiens’ usual fare. 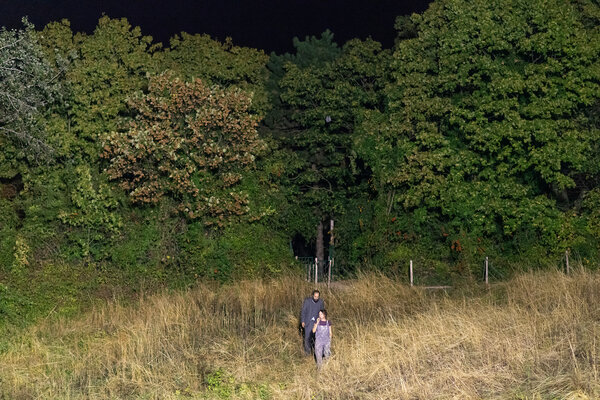 Originally scheduled to debut in April, it was delayed by the pandemic, yet could easily have been designed as a response to the events of 2020. They are even woven into the narrative: The first time we meet Scimeca, he is on an ecofriendly toilet, discussing his post-pandemic work options with his agent. That’s until Tual snatches his phone, smashes it and reminds him of his new commitment — prompted by the first lockdown — to anticonsumerism and environmental justice above the lure of Netflix roles.

“No Plowing Is Too Deep” is an intriguing, bittersweet attempt to figure out how comedy can take on the climate emergency. Watching this outstanding trio of comedians make fun of themselves while building a machine to recycle feces is attention grabbing enough, yet they have also experimented with visual storytelling, at one point sliding open the right wall of the stage to continue the play outside.

Digital offerings are never going to offer that particular thrill, but a number of French comedians have found ways to hone their craft at home. Some, like Camille Lellouche, Thomas Poitevin and Tristan Lopin, have become masters of the quick character vignette on social media. In early November, Poitevin reprised one of his hits, Gentiane, a lockdown diarist who decries the government’s decisions with over-the-top literary flourishes.

Some comedians based in France cater to an English-speaking audience, too. Paul Taylor, a British-born stand-up who has carved a niche for himself with his ability to switch seamlessly between French and English, hosts a bilingual “Happy Hour” on YouTube every Thursday, and launched a daily series for the second lockdown.

In “I Swear,” he teaches the subtleties of British insults — most of which can’t be printed in The New York Times — to viewers. Taylor’s latest one-man show, “So British ou Presque,” seen at L’Européen in October, had weak spots, especially when it came to jokes about family life; onscreen, however, he is a welcome blaze of manic energy.

It’s a casual collection of conversations between the pair, presumably recorded as travel restrictions hit around the world. In the first episode alone, they riff on the cultural and language barriers between them to land on some very risqué puns and stories. “Long-Distance Relationship” is a curious peek behind the scenes of both stand-up and a romantic match that has mystified some.

Between lockdown ventures and recalibrated live shows, 2020 has had no shortage of experimental comedy. And it’s probably never had an audience so in need of a good laugh.