Madonna isn’t going to let us forget that she works hard on her health and fitness. At 62 years of age, she has the right to show off the body she’s treated so well over the years — and flaunting those selfies on Instagram is exactly what she did. 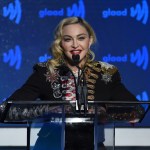 The mother-of-six left little to the imagination with an outfit that looks like a Blonde Ambition throwback — black lingerie that shows off her curves. Or the photos could have been a page from her 1992 coffee table book, Sex, with photographs by Steven Meisel. It doesn’t matter that 29 years have gone by since that Madonna era, she’s still got all of the right moves.

Of course, the “Vogue” singer has to tease a bit with her caption. She wrote, “And Now For A Moment of Self Reflection………….. Madame ❌.” Yep, that’s totally Madonna — always sex-positive and willing to tantalize no matter what season of her life she’s in.

But don’t take Madonna too seriously, the most important part of her life is being a mother to daughters Lourdes Leon, 24, Mercy James, 15, Stelle Ciccone, 8, and Estere Ciccone, 8, and sons Rocco Ritchie, 20, and David Banda, 15. And the pop icon has raised them to be individual thinkers just like their mom. “I try to teach them to think outside the box. To be daring. To choose to do things because they are the right thing to do, not because everybody else is doing them,” she told Harper’s Bazaar in 2013.

As long as the kids let their mom do her thing on Instagram — she’s Madonna after all — they know she’s there for them at the end of the day. And those are some pretty amazing photos, so let her show it all off.

Click here to see all the celebrities who have adopted children.