She’s still technically on maternity leave, but Meghan Markle just made a surprise post-baby appearance to squeeze in a little more quality time with her husband. On Saturday, the Duchess of Sussex joined Prince Harry to watch the first-ever regular season MLB game played in London. And judging by the photos from Meghan’s unannounced evening out, the impromptu date night was — yep, we’re going there — a home run.

Meghan kept it casual chic, wearing a belted black Stella McCartney dress and no-fuss ballet flats. Harry chose a classic black Invictus Games polo for the occasion, since the evening was in support of the Invictus Games Foundation. Before the game, the Duke and Duchess mingled with both teams: the New York Yankees and the Boston Red Sox. “I was very very nervous,” Red Sox manager Alex Cora told ESPN about meeting Harry and Meghan. “We were pleased to have them in the clubhouse.”

Adorably, both teams gifted the couple with custom fan gear for baby Archie. From the Yankees, the royals received a Yankees jersey with the infant’s name and the number 19 emblazoned on the back. From the Red Sox, they received a miniature bat and a onesie perfect for any budding Sox-fan baby. 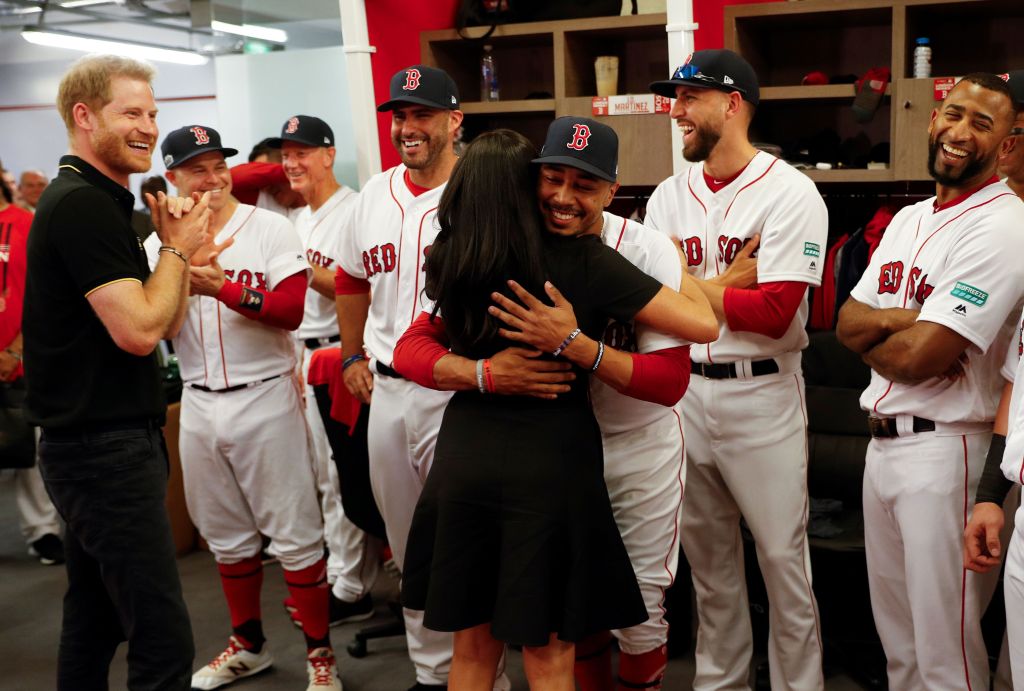 While it’s unclear which team, if any, Harry and Meghan were rooting for, the Red Sox might have had an edge. After all, they’re practically family… or so they say. According to Hello magazine, Red Sox’s Mookie Betts revealed to Meghan that they are distant relatives. “My great, great, great…” Betts started, before Meghan jokingly added, “Great, great, great….” Betts laughed, insisting, “We’re family somehow!” This earned him a hug from his long-lost cousin, er, Meghan. (Per The Boston Globe, Meghan and Betts’ ancestors are from the same part of Alabama.)

After meeting the teams, Harry and Meghan headed for a reception of Invictus athletes, where they confessed to Bianca Rainbow-Jones, a wife of one of the athletes, that they’d had “a sleepless night” due to baby Archie. Still, the couple seemed in good spirits as they watched the game from the stands with others involved with the Invictus Foundation.

Meghan hasn’t even made a handful of public appearances since giving birth to Archie on May 6, so her presence at the ball game was a pleasant shock. However, fans probably shouldn’t get their hopes up about Meghan returning to full royal duty just yet. According to the U.K.’s Express, a royal source has stated, “You’ll probably see her at a few engagements, but she won’t be back to work properly until later in the year.” How much later? Meghan will reportedly remain on maternity leave “until the fall.”