Painted on the Cave Wall, an Image of Modern Life

PARIS — It’s always wise to doubt those who praise an art exhibition as “groundbreaking”: a promise of false dawns, a cliché best left to the marketing teams. But at the Pompidou Center, the most important exhibition of the Parisian season really does feel like it’s unearthed something new. It rewrites the history of modern art by digging deeper than ever before, and scatters the art of the 20th century with shards of primordial basalt and bone.

So don your hard hat, grip your pickax, and descend into “Préhistoire” (“Prehistory”), a show of stunning ambition that stretches the last 100-odd years of European and American art to a geological time scale. It takes the standard definition of modernity — understood to mean progress, science, rationalism, acceleration and alienation — and, without junking it, reveals that modernity also has a flip side that extends deep into the earth.

The exhibition proposes that prehistory, a concept invented in the late-19th century that flowered in the years around 1900, offered artists and intellectuals a new experience of time, one that felt thicker and more material than the unmoored present we still call modern. Becoming modern, “Préhistoire” proposes, meant both speeding up and slowing down, and learning from an age before human sovereignty over time and the planet. 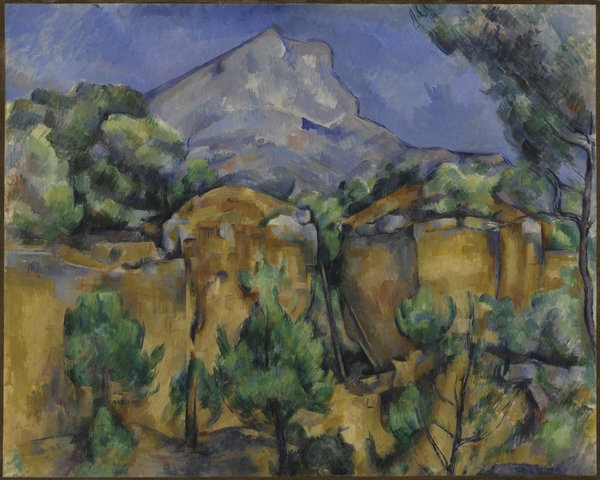 It proves this with more than 300 works of art — by Cézanne and Picasso, Claes Oldenburg and Robert Smithson, and contemporary artists such as Tacita Dean and Giuseppe Penone — appearing amid Paleolithic carvings, Cro-Magnon skulls, and fossils from up to 56 million years ago. (There are also some great dinosaur B-movies.)

“Préhistoire” is not the first exhibition at a modern art museum to examine Paleolithic and Neolithic art: the Museum of Modern Art in New York showed watercolor copies of cave paintings as early as 1937. (That MoMA catalog is on view in the show at the Pompidou.) The innovation of “Préhistoire,” though, is that it leaves behind the humanistic pretensions of understanding our prehistoric “ancestors,” and concentrates on the uses made of prehistory in the modern age. The show’s subtitle, “A Modern Enigma,” asserts that geology, paleontology and archaeology were as much about building a common fantasy of humanity’s present as discovering the true origins of life.

The word “prehistory” was coined by Scandinavian archaeologists around 1834, and by the 1860s, Europeans had grown enraptured by floppy-haired hominids, galumphing dinosaurs and rocks from a time before Homo sapiens. At the World’s Fair of 1867, Parisians gasped before the “Immodest Venus,” which is on display at the Pompidou): a 16,000-year-old female figure carved from mammoth ivory, her sex indicated by a slit in the tusk. Photographs in “Préhistoire” from the 1889 World’s Fair — the one the Eiffel Tower was built for — reveal that visitors encountered Neanderthal skeletons alongside the latest technologies. One French best seller on “primitive man,” from 1870, has illustrations of muscly, tunic-clad cave men who look suspiciously like classical Greek sculptures.

Just as crucial to modernism’s development was a prehistoric vision of time before humankind, as geologists dislodged fossils of long-extinct flatfish and sea snails. The theme grew especially strong after World War I, when Max Ernst, the pioneering Surrealist, made grim, ornery paintings and etchings of petrified forests, glacialized landscapes and sedimented earth. Were these scenes from after humanity, or before it? Millenarians had long preached the apocalypse, but these fossils revealed something new: that the world might go on even after human life ended.

What’s most thrilling about “Préhistoire” is how its philosophical rethinking of modern time — where acceleration jostles with the deep past — dovetails with an utterly rigorous engagement with the archives of art history. This show doesn’t merely juxtapose hand axes and fossils with superficially concordant modern art, but grounds these juxtapositions with the artists’ notebooks, interviews, and other primary sources.

Three blocky paintings by Cézanne, contrasting the Provençal woods with escarpments of red-orange stone, hang here with a sketchbook that includes a scribbled diagram of stratified rock. Both Picasso and Giacometti owned plaster casts of one of the most famous of all prehistoric art works: the Venus of Lespugue, a bulky ivory statuette with a tiny, thrusting head and massive buttocks, discovered in 1922. The Venus is here, as arresting as she was 23,000 years ago, and stands amid stark, stylized bronzes and plasters by the likes of Matisse, Miró and Henry Moore.

You can see how these modernists’ passion for prehistory got tangled up with a more famous and fraught influence: “primitive art,” now better known as African and Oceanic sculpture. The distinction wasn’t always clean in the early 20th century, for artists and for the popular press — a women’s magazine on display here features a “prehistoric” fashion spread that puts Neolithic female figurines right next to West African statuary.

Yet the appeal of prehistory endured well into the postwar era, long after the “primitivist” tide went out. The development of the atom bomb made some artists long to return to the cave, whether through Joseph Beuys’s pseudoprehistoric watercolors or the architect Frederick Kiesler’s grotto-like “Endless House.” (They appear here in the company of ravishing watercolors documenting the cave paintings at Lascaux and elsewhere by Henri Breuil, a Catholic priest who became an authority on parietal art.)

Carl Andre — who said, “I think artists are either Paleolithic or Neolithic. I am decidedly the latter” — was one of many minimalists who found presentiments of abstraction in ancient stone monoliths. The salt-encrusted stones of Robert Smithson’s “Spiral Jetty,” seen from the sky in the artist’s classic 1970 film, functioned as megaliths that commemorate nothing but their own eroding form.

This show starts to stutter and loses its way as it moves to the present, and the curators’ engagement with modernity and thickened time gives way to a few too many wink-nudge sendups of old rocks and fertility goddesses. I was shocked by the deferral, in as smart as a show as this one, to the idiotic Chapman Brothers, whose little totems of dinosaurs made of cardboard and toilet paper left me impatient for the next extinction event. And there are weird offramps and distractions. The curators have dusted off a large painting from 1971 of an elephant in a zoo by the underappreciated painter Gilles Aillaud — which is lovely, but which has nothing to do with prehistory. (Is it here because elephants look like mammoths?!)

At least there is, at the end, Pierre Huyghe’s acclaimed short film “Untitled (Human Mask),” shown here in a context that recasts its melancholy vision of the near future. Shot near Fukushima, Japan, after the 2011 tsunami and nuclear meltdown, the film centers on a monkey wearing a glossy white mask from Noh drama, left alone in a restaurant after the last humans have died. The monkey performs the rote motions of waitressing, puts its paw to its human mask, but there is no clientele anymore — just the gaze of a drone camera, probing a world beyond human reach.

I’ve probably watched Mr. Huyghe’s film of nuclear disaster and human extinction more than a dozen times now, in exhibitions from London to Los Angeles, Antwerp to New York. But never, until this show, had I felt this tragedy of the near future could also be a gaze on the distant past. Living in the Anthropocene means accepting our authorship of geology itself, and the approach of a world not even hospitable for cave men. Between the monkey and the drone lies an ecosystem without humans that is hardly unprecedented on this planet, where entire ages endure only as fossils. 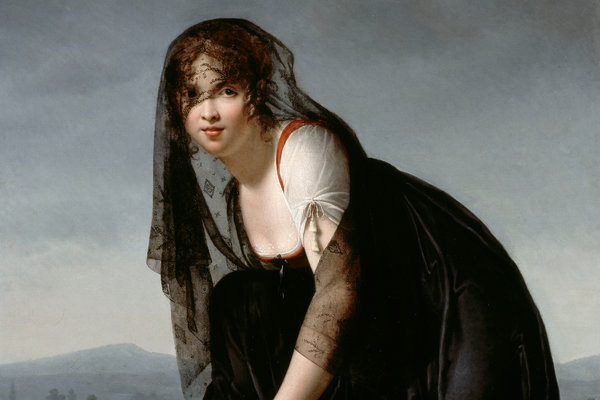 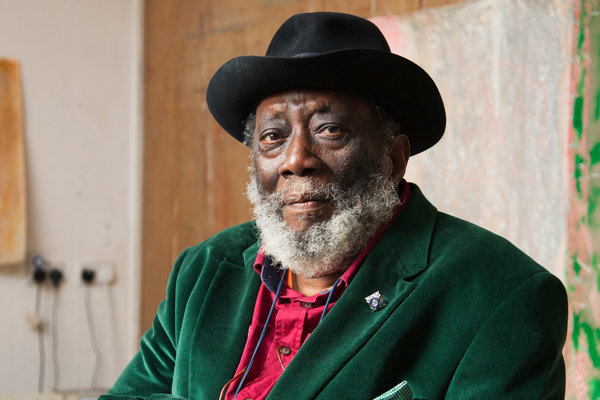 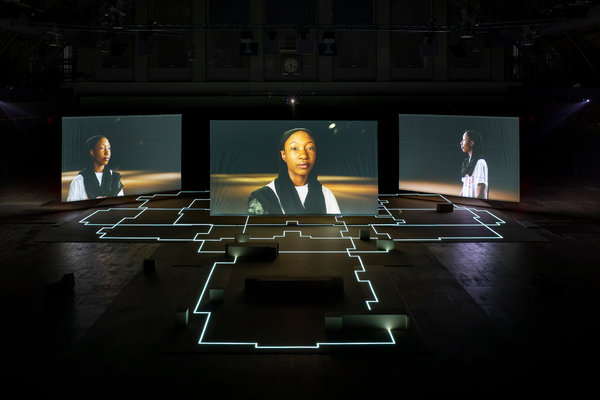 Jason Farago is an art critic for The Times. He reviews exhibitions in New York and abroad, with a focus on global approaches to art history. Previously he edited Even, an art magazine he co-founded. In 2017 he was awarded the inaugural Rabkin Prize for art criticism. @jsf