Paul Laubin, a revered oboe maker who was one of the few remaining woodwind artisans to build their instruments by hand — he made so few a year that customers might have to wait a decade to play one — died on March 1 at his workshop in Peekskill, N.Y. He was 88.

His wife, Meredith Laubin, confirmed the death. She said that Mr. Laubin, who lived in Mahopac, N.Y., had collapsed at his workshop at some point during the day and the police found his body there that night.

In the world of oboes, his partisans believe, there are Mr. Laubin’s oboes and then there is everything else.

Mr. Laubin was in his early 20s when he began making oboes with his father, Alfred, who founded A. Laubin Inc. and built his first oboe in 1931. He took over the business when his father died in 1976. His son, Alex, began working alongside him in 2003.

Oboists in major orchestras, including the New York Philharmonic, the Boston Symphony Orchestra and the St. Louis Symphony, have played Mr. Laubin’s instruments, cherishing their dark and rich tone.

“There is something that strikes a chord deep in your body when you play a Laubin,” said Sherry Sylar, the associate principal oboist of the New York Philharmonic. “It’s a resonance that doesn’t happen with any other oboe. It rings inside your body. You get addicted to making that kind of a sound and nothing else will do.”

In a dusty workshop near the Hudson River, lined with machines built as long ago as 1881, Mr. Laubin crafted his oboes and English horns with an almost religious sense of precision. He wore an apron and puffed a cob pipe as he drilled and lathed the grenadilla and rosewood used to make his instruments. (The pipe doubled as a testing device: Mr. Laubin would blow smoke through the instrument’s joints to detect air leaks.)

His father taught him instrument-making techniques that date back centuries. As the decades passed and instrument makers began embracing computerized design and factory automation, the younger Mr. Laubin steadfastly resisted change. As far as he was concerned, if it took 10 years to build a good oboe — well, so be it.

“What’s the rush?” Mr. Laubin said in an interview with The New York Times in 1991. “I don’t want anything going out of here with my name that I haven’t made and checked and played myself.”

Mr. Laubin would store the blocks of his rare hardwoods outdoors for years so they could acclimate to extremes of weather and become more resilient instruments, resistant to the cracks that are the bane of woodwind players. After he drilled a hole that would become the instrument’s bore, the chunk of wood sometimes needed another year to dry out.

Mr. Laubin, who was a professional oboist as a young man, constantly played each oboe he worked on in search of imperfections. “Every key is a struggle,” he told News 12 Westchester in 2012.

When a Laubin oboe was finally completed, its unveiling became a cause for celebration. One customer arrived at the Peekskill workshop with a bottle of champagne, and as he played his first few notes, Mr. Laubin raised a toast. 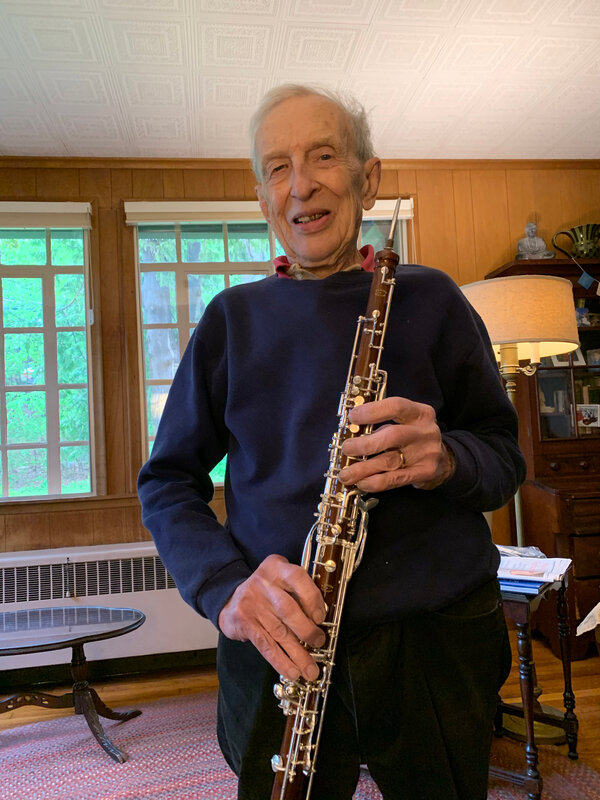 Paul Edward Laubin was born on Dec. 14, 1932, in Hartford, Conn. His father, an oboist and music teacher, started making oboes because he was dissatisfied with the quality of the instruments that were available; he built the first Laubin oboe as an experiment, melting down his wife’s silverware to make its keys. Paul’s mother, Lillian (Ely de Breton) Laubin, was a homemaker.

Mr. Laubin studied auto mechanics and music at Louisiana State University in the 1950s. Before long, his yearning to perform got the better of him, and he landed a spot in the Atlanta Symphony Orchestra. Soon after that, he finally joined the family business and began to build oboes with his father in the garage of their home in Scarsdale, N.Y.

In 1958, they moved their workshop to a clarinet factory in Long Island City in Queens, and for a time the business was churning out (relatively speaking) 100 instruments per year.

Mr. Laubin married Meredith Van Lynip, a flutist, in 1966. He moved the company to its current location in Peekskill in 1988. As time passed, Mr. Laubin’s team got smaller, and so did his production.

By the 1990s, A. Laubin Inc. was producing about 22 instruments a year. By around 2005, the average was down to 15. Over time, the scarcity of Laubin oboes only added to their legend. The company has rarely advertised, relying on word of mouth. A grenadilla oboe costs $13,200, and a rosewood instrument costs $14,000.

In addition to his wife and son, Mr. Laubin is survived by a daughter, Michelle; a sister, Vanette Arone; a brother, Carl; and two grandchildren.

Mr. Laubin was well aware that selling so few instruments a year, no matter how exquisite, did not necessarily make financial sense. “I chose to follow my father even though I knew I’d never get rich on it,” he told The Times in 1989. “I would have to think twice about starting it today.”

The company’s fate is now undetermined. Alex Laubin served as office manager and helped with some aspects of production but did not learn the full process. He often urged his father to modernize their operation — to little avail.

“No one sits down anymore and files out keys,” Meredith Laubin said. “No one turns out one oboe joint at a time. This is all automated now, like how robots make cars. But Paul wasn’t endorsing any of these things. To him, there was no cheating the family recipe.”

But Mr. Laubin knew the old ways would come to an end. In recent years, he was finding it harder to ignore the stark realities of being an Old World artisan in the modern era.

“Paul got to have one part of his dream, which was to be able to work with his son,” Ms. Laubin said. “But the other part of his dream, knowing that his work would continue on in the way he did things, he knew that wasn’t going to happen.”

Nevertheless, he hewed to tradition. On his work table the day he died lay the beginnings of Laubin oboe No. 2,600.