NFL coaches thumbed their collective — and exposed — noses at the NFL’s mask mandate in Week 2.

The league responded with hefty fines of $100,000 per coach and $250,000 per club. The first three to get fined were Denver’s Vic Fangio, San Francisco’s Kyle Shanahan and Seattle’s Pete Carroll, according to a person with knowledge of the punishment who spoke to The Associated Press on condition of anonymity because the coaches were not identified.

The punishment was meted out a week after the NFL reminded team personnel on the sidelines about the rules for wearing face coverings during the coronavirus pandemic, lest they put the fledgling season at risk.

More coaches and clubs can expect similar punishments as the memo last week from Troy Vincent, who oversees the league’s football operations, was largely ignored throughout the weekend. 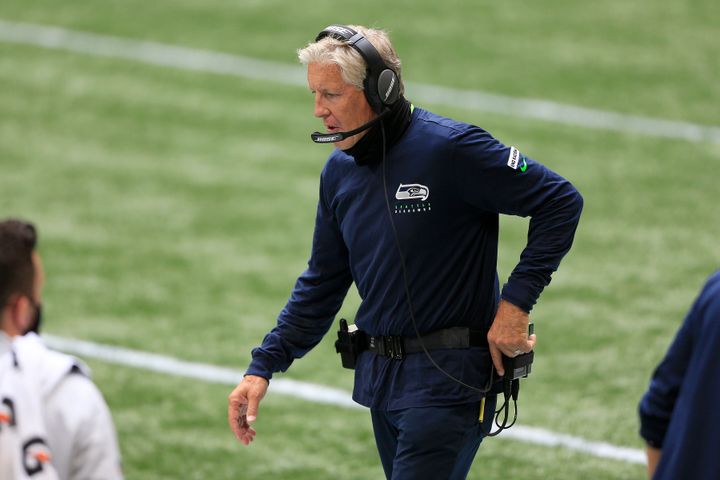 Capping a weekend of deliberate defiance and/or desultory disobedience, Raiders coach Jon Gruden, who said last week he felt Vincent’s memo was directed at him, and Saints coach Sean Payton were shown on a split screen Monday night, both of them breaking the rules.

Following the Raiders’ 34-24 win over the Saints, Gruden revealed he’d had COVID-19 and apologized for violating the rules.

“I’m doing my best,” Gruden said. “I’ve had the virus. I’m doing my best. I’m very sensitive about it. I’m calling the plays. I apologize. If I get fined, I will have to pay the fine.”

The scenes were similar Sunday with head coaches and assistants apparently finding it too hard to keep their faces covered as required under the league’s COVID-19 protocols with either a mask, gaiter or face shield. Players, who, like the coaches, are subject to daily COVID-19 tests, are exempt from the face covering requirements.

Some coaches such as Belichick, McDaniels and Steelers coach Mike Tomlin wore their masks or gaiters over their mouths but not noses. Others such as Carroll, Spagnuolo and Fangio wore their face coverings around their chins or necks, exposing both their mouths and noses.

In his strongly worded memo, Vincent said teams “must remain vigilant and disciplined in following the processes and protocols put in place by not only the league, union and clubs, but also by state and local governments.”

The rules don’t apply to players, but all other individuals with bench area access, including coaches and members of the club medical staff, are required to wear face coverings at all times.

Failure to do so, Vincent warned in his memo, “will result in accountability measures being imposed against offending individuals and/or clubs. The face covering must be worn as designed so that it securely fits across the wearer’s nose and mouth to prevent the transmission of the virus.”