PITTSFIELD, Mass. — On Sunday afternoon, Nicholas Edwards rolled the white gaiter over his nose and mouth for the last time.

For six weeks, he had been playing Jesus in a production of “Godspell” that was the first musical featuring union actors performed in the United States since coronavirus forced theaters to close in mid-March.

The Berkshire Theater Group show had many restrictions. It was performed outdoors, under a tent; the actors were tested for the virus three times a week, lived together in a pandemic pod, and were kept apart onstage. And it apparently worked — the run ended with no known infections among the cast, crew, staff or audience.

Among those in the final crowd: the show’s composer, Stephen Schwartz, who told the cast afterward, “I didn’t realize how much we needed this.” Two hours later, most of them piled into vans for New York.

Edwards, 28, who had begun the year on Broadway in “Frozen,” headed back to an uncertain future. Just before boarding the van, he sat outside the tent, in a new “Godspell” jean jacket with “Jesus” stitched above the pocket, to talk about the unusual run. Here are edited excerpts from that conversation. 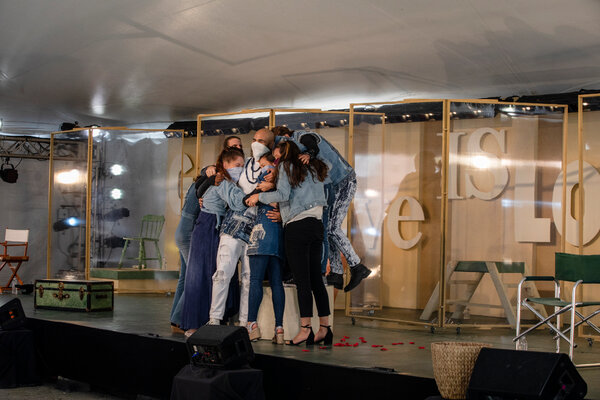 You ended with a group hug at the curtain call — something you had avoided at previous performances.

Today, the bubble is broken. Obviously we’re still in a pandemic, but these are people who we’ve lived with, and this is something we’ve wanted to do so bad for the longest time — touch each other onstage.

It looked like you were weeping during “On the Willows,” as Jesus is saying farewell to the cast.

At the beginning of this process, the first few rehearsals, I was like, “Oh, this is going to get shut down.” But we did it, and I’m so proud of it. We reached the end, and we did what we set out to do.

Is this the smallest stage you’ve been on, or the biggest?

Physically it’s pretty small. But every day you feel like the whole world is watching you. So in a way this was the biggest thing I’ve ever done.

Why did you agree to do this show?

What was the hardest part of the protocols and restrictions?

Not being able to touch each other. Figuring out the masks. God, the partitions. Who can sing, when. The distancing factor. All of it was hard.

Did you ever feel unsafe?

No, actually. I had had the virus, and had gotten the antibodies, and I felt really safe. But I was struggling emotionally and mentally. Usually the stage is a safe place where we feel most at home and normal, but it became a place where I was anxious all the time.

I gather there were five positive tests among the cast and crew during the run, including one for you, all of which turned out to be false.

It seemed like we were getting one every week, almost. It was frustrating, because the testing was supposed to keep us safe, but it started to work against us.

At the start of the run, you had 75 patrons under the tent; then Massachusetts required you to cut back to 50. What was it like performing for an audience that size?

It was weird. But some nights you get certain audience members that this show is, in that moment, changing their life, or making their day. They’re really leaning in and watching. So in a way the smaller audiences made you appreciate each person.

If one of your actor friends said they were considering performing during the pandemic, what would you advise?

Send me the rule book. Let me read it over first, and I’ll tell you if you should do it or not. I feel almost like an expert now in theatering during Covid times.

Do you think Actors’ Equity is being too restrictive, or appropriately protective?

I have very mixed emotions. I’m so grateful for all of the work they’ve been doing, and they allowed this to happen — there was a lot of fighting and back-and-forth, but they cleared it. But the one thing they’re missing is having a person here, from Equity, at these locations. If I had any advice for Equity it would be to get out of your apartments and have someone be on site to really know what it’s like.

Your mother is Dominican, your father is Puerto Rican, you identify as Afro-Latinx, and many days you wore Black Lives Matter T-shirts to rehearsal. What was on your mind this summer?

So much. There’s the whole being-Black-in-America thing, and then there’s also being a person of color in the theater, which is its own thing. You don’t understand it until you’ve lived through it — what it’s like to walk into an audition room and have someone ask you to basically Black it up, or to hear a creative tell you that you might not be Latinx enough, or you might not be Black enough. And here I am, sitting in this crossroads, and where do I lie? Cause I’m just me.

You’ve now played Jesus twice, in “Jesus Christ Superstar” and “Godspell.” How has that affected you?

Being a person of color, and then standing center stage, the most powerful place in the world, and telling these stories to a mostly white audience, and they listen to me — I didn’t realize how powerful that was. And now, more than ever, I know that it’s important that you use your voice.

Why do you think “Godspell” has lasted for 50 years?

The music, obviously. And yes, this show is 50 years old, but damn, it still hits. I think “Godspell” always works because whenever there’s something going on in the world — recession, wildfires, terrorism, pandemic — this show brings hope to people.

You got to meet Yo-Yo Ma, and Brian Stokes Mitchell, and Stephen Schwartz. I imagine that’s not what you expected from a summer show.

Yo-Yo Ma played for us in the parking lot, and it was just crazy. And then Brian Stokes Mitchell was absolutely unreal — I’ve looked up to him my entire life; I always was like, “I want to be him when I grow up.” The next day, he called me and we talked for almost an hour about life, theater, the pandemic, Black Lives Matter. And he said, “If you ever need anything, you call me, or text me.” I was crying. And Stephen Schwartz — that was amazing. He was so chill. He was so emotional. The whole time, in the back of my mind, I’m like, “Please like our show!” I was just so glad that he was moved by it.

What are you going to do once you’re back in New York?

I want to hug my mom. I want to see my friends, now that New York is becoming safer. I’m going to get back to my Twitch community, where I stream video games and sometimes I play music on there. I want to keep writing my music — I started releasing my original songs, acoustically, on Instagram. And I’m getting a puppy.

Would you go see a show during this pandemic?

Yes. Oh my God, I’ll fly out to the next one if they let me.