Queen Elizabeth has had one of the most difficult years of her life with family feuds, Prince Andrew’s scandal and most importantly, the loss of her husband, Prince Philip. In a preview photo for Saturday’s Christmas Day speech, royal followers saw the emotional impact 2021 delivered to the 95-year-old royal. From the image alone — this year has been hard.

The buzz is that the speech will be very personal, which is understandable given what she’s endured this year after losing her husband of 73 years just two months shy of his 100th birthday. In the photo, Queen Elizabeth looks stoically into the camera, wearing a red shift dress by British designer Angela Kelly. She accessorized her outfit with her signature pearls and a beautiful sapphire chrysanthemum brooch. Normally, the royal adorns her desk with multiple photos of her family, but this year, there was only one. 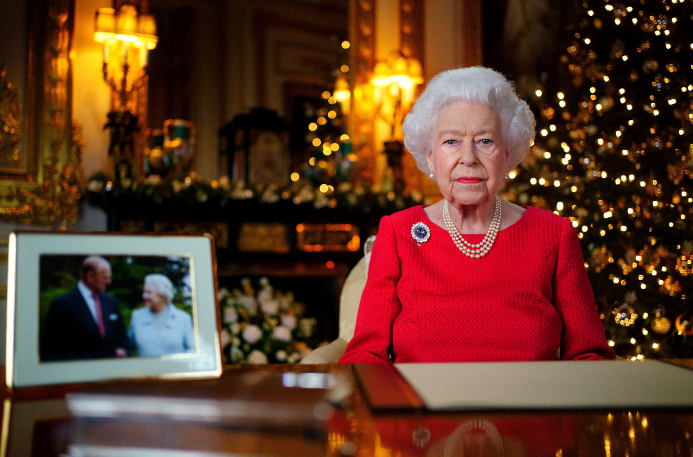 The sole photograph is of her and Philip gazing adoringly at each other, arm-in-arm, and she’s wearing the same chrysanthemum brooch. It’s hard not to choke back tears, thinking about how she lovingly chose this picture of their diamond anniversary to represent their lives together. Her year of mourning in a pandemic has been filled with a lot of isolation and loneliness, exactly how she sat at his funeral — alone.

Her holiday speech will probably be unlike anything the U.K. has ever heard since it’s usually the Queen, who helps uplift the nation in challenging times. But this time, she might be leaning on everyone to get her through what has to be a very sad season of life for her — and that image speaks volumes without the royal ever uttering a word.

Before you go, click here to see the best photos of Queen Elizabeth II and Prince Philip over the years.