Early audiences were baffled by “Waiting for Godot.” Even Peter Hall, who in 1955 directed the first English language production, claimed not to understand it. When actors with access to its author, Samuel Beckett, demanded explanations from him, he usually professed himself helpless to answer.

Now, though some of the references have become more obscure with time, it’s hard to imagine anyone not fathoming the play’s gist. Decades of high school lit seminars, let alone the gradual opening of the playgoing class’s eyes to the world’s inequities and terrors, have transformed it from an enigmatic museum piece into an existential tchotchke.

But there is more to “Waiting for Godot,” which the New Group has just released as a lugubrious film starring Ethan Hawke and John Leguizamo, than its status as a modern classic suggests. Its portrait of life as a charnel house may be half the story but in this case, it’s the only half.

After all, Beckett called “Godot” a tragicomedy, presumably with emphasis on the second part of the word because the first part speaks for itself. The thumbprints of Buster Keaton, and especially Laurel and Hardy, are all over its main characters, the broken-down migrant workers Vladimir and Estragon. (Estragon was first played on Broadway by the great vaudevillian and erstwhile Cowardly Lion Bert Lahr.) The undercard, Pozzo and Lucky, are no comic slouches either; together, the four wanderers, with their long-honed routines and jags of passive-aggressive mayhem, outnumber and upstage the Three Stooges.

But of the New Group’s cast, which also includes Tarik Trotter as Pozzo and Wallace Shawn as Lucky, only Leguizamo, as Estragon, could really be considered a clown — and not just because he called himself one in his 2011 one-man show “Ghetto Klown.”

A theatrical being to his core, he has the quick-twitch reflexes and papered-over wounds that can make injury funny. The best parts of this “Waiting for Godot” mine that duality, and also Leguizamo’s heritage; when Hawke, as Vladimir, discredits Estragon’s account of being beaten for no cause, we get a new, white-privilege angle on their recurrent miscommunication. 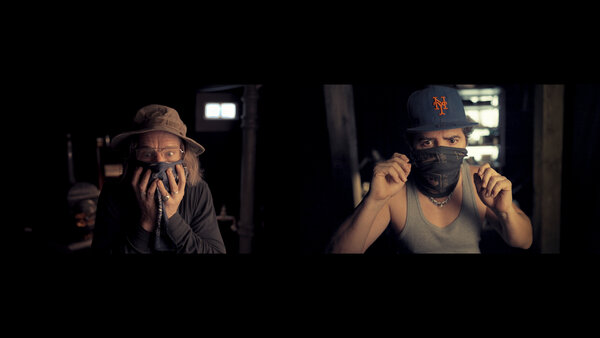 But even Leguizamo is done in by a production, directed by Scott Elliott, that is almost entirely — and, it would seem, deliberately — humorless. The actors are shot in separate gloomy interiors, and from stationary positions, so as to appear in Stygian Zoom-like frames as if at a virtual meeting of hobbits.

And though Beckett did say, in response to a proposed in-the-round production, that “Godot” needed “a very closed box,” I doubt this is what he meant. In any case, a play that famously takes place outdoors, with its sole scenic element a barren tree that for Act II sprouts five leaves, is now mercilessly interiorized, and a relationship that is meant to test the limits of intimacy is unhelpfully kept at arm’s length from the start.

To the extent this comments on our pandemic moment, it’s at least intriguing; a lot of thought seems to have gone into Vladimir and Estragon’s decisions to mask up, mostly when they approach Pozzo and Lucky. But this and other contemporary intrusions, including the use of cellphones for texting and black screens when the characters apparently disable their feed, don’t actually illuminate anything, let alone emphasize the play’s humor as they seem to intend. It’s hard to laugh when you can hardly see.

That problem encourages a certain degree of overacting, especially from Hawke, as if he were trying to make himself visible from a distance. (He has lovely moments, though.) Trotter, who under the name Black Thought was a co-founder of the hip-hop group the Roots, uses his terrific stage voice to capture Pozzo’s first-act bluster without resorting to flailing, but has a harder time with the humbled version of the character who returns in Act II.

At least Drake Bradshaw, in the small role of Godot’s young herald, is sweetly effective in both his appearances. And though Shawn, delivering Lucky’s impossible speech — nine minutes of gibberish — is able to make convincing emotional sense of the moment, the production as a whole doesn’t support his efforts. Vladimir and Estragon check out of the Zoom call for much of the harangue, encouraging us to think we might do so as well.

It’s not that you need to be literal with “Waiting for Godot”; it’s anything but a naturalistic drama. I liked the designer Qween Jean’s past-midnight cowboy look for Hawke and Mets cap and tank top pandemic ensemble for Leguizamo. But if Elliott, working with the Academy Award winner John Ridley’s Nō Studios and the Hollywood producer Frank Marshall, has avoided excessive fealty to Beckett’s instructions — the estate approved the socially distanced production — he has not provided anything as coherent to take their place.

For one thing, the action is awkwardly staged, even beyond the necessity of executing comedy bits when the actors, if not the characters, are calling in from different locations. (The passing of Lucky’s hat, a clear lift from Laurel and Hardy, is totally botched.) At three hours, the show is also long, even bloated. Most problematically, Vladimir’s and Estragon’s embraces, so necessary to the play’s emotional equilibrium, are about as warm here as octopi suckering up to opposite sides of a glass wall.

Far from seeming too modern though, this “Godot,” especially coming more than a year into the pandemic, seems too passé. Other companies, even no-budget ones like Theater in Quarantine, have long since figured out ways to make an aesthetic out of the limitations of lockdown. Why only now, just as those lockdowns are lifting, is this first-gen take on pandemic play production emerging? About the only expressive use of the medium is in the processing that gives the film the appearance of a dodgy video feed, with freezes and glitches that imitate a poor signal.

You could argue that a dodgy feed is exactly the way “Godot” depicts life: as a poor approximation of what it should be. But in Vladimir and Estragon, Beckett also finds poignancy, humor and the last dregs of physical love, where Elliott and company find only horror. If they are right, what kind of pass have we come to, in which even Beckett’s vision is not bleak enough?

Waiting for Godot
Through June 30; thenewgroup.org