Robert Hunter, the primary lyricist on many of the Grateful Dead’s most memorable songs, including “Uncle John’s Band,” “Scarlet Begonias,” “Dark Star” and “Truckin’,” died on Monday night at his home in San Rafael, Calif. He was 78.

His family announced his death in a statement. His agent, Steve Martin, said Mr. Hunter had recently had surgery.

Mr. Hunter’s lyrics, often dreamlike variations on the American folk tradition, meshed seamlessly with the band’s casual musical style, helping to define the Grateful Dead as a counterculture touchstone. Interpreting his slippery lyrics became a favorite pastime of the band's most fervent fans, the Deadheads, something he relished.

“I love the fact so many people write their own lives into the songs,” he told the newspaper The Independent of East Hampton, N.Y., in 2014. “It’s not about what it means, but what sparked it.”

Mr. Hunter wrote an oft-quoted lyric in “Truckin’” that could describe his own life pretty well: “What a long, strange trip it’s been.”

He owed at least some of his songwriting sensibilities to the C.I.A.-sponsored experiments with LSD and other hallucinogens known as MK-Ultra. He was among the volunteer research subjects in the program at Stanford University in 1962, he said, and whatever they were giving him helped his writing process considerably.

“The words jumped from subconscious to the page,” he told The Independent.

Mr. Hunter wrote for and with other performers as well, including Bob Dylan. He and Mr. Dylan wrote all but one of the songs on Mr. Dylan’s album “Together Through Life,” released in 2009. 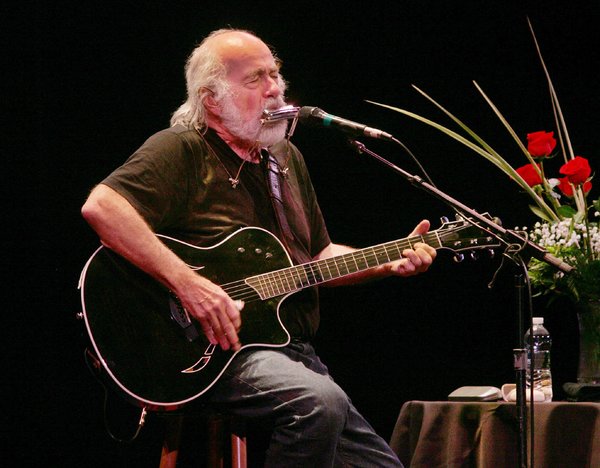 His work with the Dead, though, remained his signal achievement, one that, he acknowledged, help turn the band into an endearing, enduring musical legend.

“There were other lyricists involved in the writing of the Grateful Dead canon,” he wrote in the foreword to “The Complete Annotated Grateful Dead Lyrics” (2005; annotations by David Dodd). “Had I not joined, by invitation, as lyricist in residence, a year after they chose the name and nailed down the job through sheer prolixity, the band would have developed differently. It might have been less odd and more popular, for one thing.”

Mr. Hunter first met Jerry Garcia, the singer and guitarist who would become the band’s most recognizable member, in Palo Alto, Calif., when the two were still teenagers. They found that they shared an interest in music and even played together a bit.

“Our first group was Bob and Jerry, and our first gig was at Stanford,” he told Rolling Stone in 2015. “We got $5 for both of us. We kept it for a couple of days until we needed cigarettes, and then that was that.”

Mr. Garcia, Ron McKernan, Bob Weir, Phil Lesh and Bill Kreutzmann formed the Grateful Dead in 1965 (after briefly calling themselves the Warlocks). Mr. Hunter was in New Mexico when he was invited to join the party a year or so later.

“I had written ‘St. Stephen’ and ‘China Cat Sunflower,’” Mr. Hunter said, naming some early songs, “and I sent those — and ‘Alligator’ — off to Jerry, and he uncharacteristically wrote back. He said they were going to use the songs and why didn’t I come out and be their lyricist?”

Sometimes he would put lyrics to riffs the band was trying out. He came up with the lyrics for “Uncle John’s Band” after listening to a long instrumental tape over and over.

“I think I started out with ‘Goddamn, Uncle John’s mad,’ and like that,” he told Rolling Stone, “which turned into ‘Uncle John’s band.’ But it was my feeling about what the Dead was and could be. It was very much a song for us and about us, in the most hopeful sense.”

Other times he would present Mr. Garcia with lyrics and hope a song might result. Sometimes it did, sometimes not.

“I would give him a stack of songs and he’d say, ‘Oh, God, Hunter! Not again!’” Mr. Hunter said. “He’d throw away what he didn’t like. I’d like to have some of the stuff he tossed out.”

Mr. Hunter was born Robert Burns on June 23, 1941, in Arroyo Grande, Calif., and took his stepfather’s last name. (Details about his early life are sketchy.) He spent his senior year of high school on Long Island but was soon back on the West Coast and in the Stanford experiment.

His participation in what he did not know at the time was a C.I.A. research project is a stranger-than-fiction part of Dead lore.

“He was given LSD, psilocybin and mescaline,” Stephen Kinzer, author of the newly published book “Poisoner in Chief: Sidney Gottlieb and the CIA Search for Mind Control,” said by email. “Afterward he wrote an ecstatic six-page account of his experiences: ‘Sit back picture yourself swooping up a shell of purple with foam crests of crystal drops soft nigh they fall unto the sea of morning creep-very-softly mist.’”

“Years later,” added Mr. Kinzer, a former correspondent for The New York Times, “he recognized the irony of the C.I.A. project, which was aimed at finding a mind-control drug. ‘The United States government was in a way responsible for creating the “acid tests” and the Grateful Dead, and thereby the whole psychedelic counterculture,’ he concluded.”

Notwithstanding his encounters with drugs, Mr. Hunter took lyric writing seriously. There was, for instance, the matter of rhyming.

“After a few years in the business,” he wrote in the foreword to the lyric book, “I developed a rhyming dictionary in my head and didn’t even bother to write an end word that would provide a too-limited scope and palette of rhyme. One learns early to tuck the word love into the middle of the line rather than deal with shove, glove, dove, of, and above.”

If his lyrics were sometimes hard to make out on records or in performance, that was by design.

“Back in the day,” he wrote, “I didn’t allow my lyrics to be published with the recordings so people could dub in their own mishearings, adding a bit of themselves to the song. Stone Age recording technique assured a certain amount of verbal blur.”

Digitally remastered releases clarified the lyrics, which Mr. Hunter may have regretted.

“I’ve generally found,” he wrote, “that the words to songs I thought I heard in the works of others were more colorful and enigmatically apt than the words I eventually discovered were intended. More to my personal taste. I assume the same is true of my own work.”

Mr. Hunter also published several books of poetry. He was a nonperforming member of the Dead, but he did perform solo shows in recent years, accompanying himself on guitar, with plenty of Dead songs in his act.

“There’s nothing to compare to that, being up onstage and doing ‘Ripple’ in front of people who’ve grown up with that song,” he said. “They love it, and I’m able to give it to them as close to the source as you’re going to get.”

In a 2013 interview with Reuters, he recalled his last conversation with Mr. Garcia, who died in 1995. “He said, ‘I just wanted to tell you that your songs never stuck in my throat,’” Mr. Hunter said.

Neil Genzlinger is a writer for the Obituaries Desk. Previously he was a television, film and theater critic. @genznyt • Facebook