Roberto Bolle Says Goodbye to American Ballet Theater, but Not to Dance

Roberto Bolle can make a poet shirt look like high fashion. He can spin a ballerina into the air and catch her as if she were made of gossamer. And at American Ballet Theater, he is a global titan — one of the company’s last, as it shifts away from international stars in favor of homegrown talent. His farewell performance, last Thursday in Kenneth MacMillan’s “Manon,” signals the end of an era.

For Mr. Bolle, it was also a full-circle moment. His first performance with Ballet Theater was in “Manon,” in 2007, at the instigation of Alessandra Ferri (who chose him as her partner for her farewell in “Romeo and Juliet”). He went on to join the company as a principal dancer in 2009.

At 44, he is still as dazzling off the stage as he is on it. It’s not only that Mr. Bolle looks as though he has just stepped out of a fashion show — effortlessly — but also that he has one of the sunniest personalities in the business. Born in the Piedmont region of Italy, he started training at the Teatro alla Scala in Milan at age 11; he joined La Scala’s ballet company at 19 and was named a principal at 21.

Kevin McKenzie, Ballet Theater’s artistic director, said in a statement that Mr. Bolle is “an artist with the ultimate work ethic and sensitivity,” and that, “to his partners, he is a dream come true.” 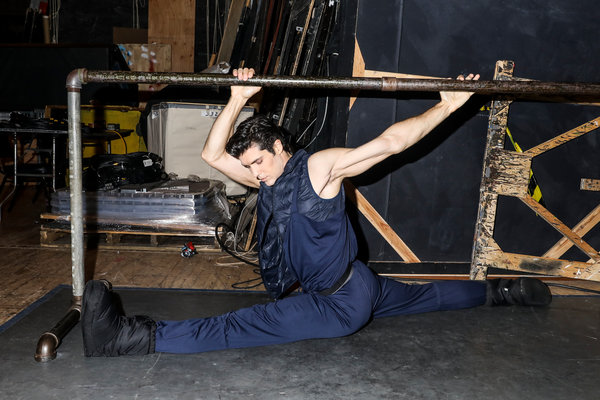 During Mr. Bolle’s final curtain call on Thursday, when dancers and members of the ballet’s staff came onstage to shower him with kisses and flowers, the female dancers did look particularly sad. A few days before, he said, Mr. McKenzie had told him how, over the years, ballerinas would come into his office asking to dance with him.

“I love that,” Mr. Bolle said. “For me, being a good partner is really important. They’re the priority. They ask me for their farewells everywhere. In 2015, there was Paloma Herrera, Julie Kent and Aurélie Dupont. Then it was Zenaida Yanowsky. And Alessandra Ferri. At some point, I said, ‘You will retire everyone.’”

He is not completely finished dancing, so there could be more farewells. But not at Ballet Theater, where his warmth and elegance will be missed. The day after his final performance, Mr. Bolle, amid much laughter, spoke about his experiences with Ballet Theater and what’s coming next. Here are edited excerpts from the conversation.

What was your favorite moment from your farewell?

“Manon” was the first ballet I first performed with A.B.T., and I remember that feeling in the first solo with no one breathing in the audience and the music so stretched out. I had the same feeling. When the audience applauded my first entrance, I was like: O.K., they are with me. But it was the dancers, the staff, the coaches — what they were saying to me and the love they have for me. I felt proud.

What did the ballet master Irina Kolpakova tell you during the curtain call?

I love her. [Laughs] Every time I come to New York, she says: “Oh! You look the same. Maybe you look younger.”

She said: “But you should not stop. We want you to dance more. Please don’t stop.”

Why are you leaving Ballet Theater now?

Kevin and I agreed it was a good time to leave A.B.T. Now it’s important for me to focus on some projects I have in Italy. During the Met season, I have a festival in Italy and I want it to evolve and become bigger and bigger. I have the possibility to create something new. I have power in Italy. If I don’t do it, no one is going to do it.

How did you adjust to Ballet Theater that first season?

When Alessandra asked me, I said, “Oh my God, I don’t know.” I was really insecure. It’s a totally different system, and nowhere else in the world is there a season like the Met season, with eight shows a week and a changing rep. It’s insane. I had to be ready and faster and to go onstage with fewer rehearsals.

Exactly. I remember Alessandra saying to me, “Once you go through this, you can do everything.” These dancers are amazing. I wish all the other dancers in La Scala and in Europe could see how they work here so they will stop complaining.

You don’t come from an artistic family. How did you end up dancing?

A friend of mine in my school started taking ballet class and she was showing me some movement, and I was curious. I liked it even though I was the only guy in the school. When I was 11, a friend of my mom’s suggested that I should try the La Scala school.

How did leaving your family at an early age affect you?

Many times, I was crying and alone. I rented a small room in someone else’s apartment that was kind of a friend of a friend of a friend — an old lady I didn’t know. It was hard, but when you’re in a profession like dance you have to be a grown person very early. So changing my life in this way helped me to change my character.

How old were you when Rudolf Nureyev came into your life?

I was 15 and in the school. Nureyev was my idol.

He wanted to cast you as it Tadzio in “Death in Venice,” but the school wouldn’t let you go. How did you react?

It was the end of the world. There was big drama.

Do you think that was that the last time you were upset and angry?

[Laughs] Probably. I was very disappointed; I was crying. But it would have been too soon. I was not ready — and Nureyev’s character was really tough.

You once said that you wanted to be the artistic director of La Scala. Is that still true?

Not yet. I have too many projects to do, and to become a director takes too much time. Later.

Are you a member of the La Scala company now?

I have the title of étoile, but I’m kind of a guest. I left when I was 23 to have more freedom. It was not an easy decision because I already had a life contract as a principal dancer.

And that’s not what dancers do in Europe, is it?

It’s not what you do. You have a very good salary and a pension and whatever happens, you’re fine. It was a big risk.

You bet on yourself and you won.