CHICAGO — Ken-Matt Martin, the incoming artistic director of Victory Gardens Theater here, said he never has revealed this publicly before, but he has a Sankofa bird tattooed on his back.

This mythical creature, with a name that means “return to retrieve” in Ghana’s Akan language, is depicted with its feet pointing forward and its head turned backward — a reminder, Martin said, of “making sure you have a reverence and understanding of the past so that as you move into the future, you know what the hell you’ve come from. That’s key to how I move, how I operate in the world.”

And that’s the delicate balance Martin, at 32, intends to strike as he takes the reins of this 47-year-old Tony Award-winning institution that had an even more tumultuous 2020 than most theater companies.

Between late May and early June, a key group of affiliated playwrights quit en masse, protesters demonstrated outside the boarded-up Lincoln Park theater, and its white executive director, who recently had been named artistic director as well, and board president resigned.

Victory Gardens has a new board president, Charles E. Harris II, and a new acting managing director, Roxanna Conner, and on March 17 it announced that Martin would become its third artistic director since its 1974 founding. He begins April 19.

That this new leadership triumvirate is entirely Black represents a first for Victory Gardens, a theater that has championed diversity while sometimes struggling to live up to those ideals. And this shift is being echoed throughout the Chicago arts scene, where Black leaders have secured the top jobs at House Theater, Sideshow Theater Company, Hubbard Street Dance and the Second City.

These moves came in the wake of the social-justice movement spurred by the killing of George Floyd in Minneapolis and fueled by the demands of the “We See You, White American Theater” national coalition of theater artists of color.

“I would not be in the position I’m in if we had not had that collective awakening this past year,” said Lanise Antoine Shelley, the House Theater’s new artistic director.

“Sure, something is shifting,” Martin said, “but you’re also talking about highly qualified people getting jobs that they’re more than qualified for.” 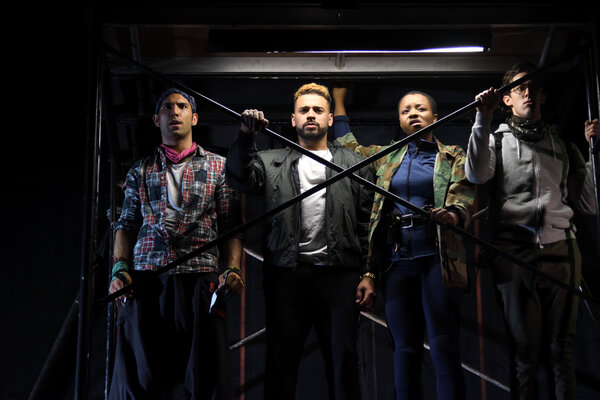 Punctuating his assertions with laughter while sitting outside a South Loop cafe blocks from his apartment, the Little Rock, Ark., native was casual and comfortable as he discussed the weighty issues facing theater and the larger culture.

“I woke up this morning and was like: You know? I’m not going to be cagey today. I’m just going to tell it straight,” he said.

He wore a baseball cap from Brown University, where he received his M.F.A. in directing, and a black mask from Chicago’s Goodman Theater, where he was serving as associate producer alongside the longtime artistic director Robert Falls when he landed the Victory Gardens job.

He was introduced to the entertainment world at age 12, when his mother drove him to Atlanta to audition for the Nickelodeon series “All That.” He landed a bit part and when that contract later prohibited him from taking a role on another network, he said he became determined to learn the business side of entertainment.

In Little Rock, Martin said, the majority of his classmates — as well as teachers, principals, and doctors — were Black. Moving to predominantly white Des Moines, Iowa, where he earned degrees in musical theater and public relations at Drake University, and encountered racism on the street, was a shock to the system.

Yet he remained in the city to pull off what he said will remain his crowning achievement: He co-founded the Pyramid Theater Company, which has thrived connecting the work of Black playwrights and artists to majority-Black audiences.

Martin said it took “chutzpah” to make that happen in such an environment: “There were people saying, ‘We don’t need another theater. You all need to be working to make the theaters we already have more diverse.’ ”

In 2015 Martin began a yearlong Goodman Theater apprenticeship. Afterward, as he pursued his M.F.A. at Brown University, he did work at the affiliated Trinity Repertory Company, where he recalled being asked at a meeting: “Hey, can you help us figure out how to better market this show to Black audiences?”

“Mind you, I’m a student.” He laughed. “What does that say that you have to come to me to figure that thing out?”

As producing director at the Williamstown Theater Festival, he spent the non-summer months in New York City negotiating contracts and transfer deals while having such random encounters as passing Adam Driver in a stairwell while the “Star Wars” actor practiced lines for a play.

“I’m the only person of color, period, in 90 percent of the conversations that I’m having,” Martin recalled, “and yet here I am, just this kid from Little Rock, and I can run into Kylo Ren on the way to my office.”

The Goodman enticed Martin to return to Chicago in November 2019 to take the No. 2 artistic position to Falls. Martin did hands-on work with such productions as Jocelyn Bioh’s “School Girls; Or, The African Mean Girls Play,” which had an artistic team of all Black women.

“None of us had been in a room like that before,” the show’s director, Lili-Anne Brown, said. “He understood how significant that was, and he worked to uplift it and protect it.”

Then the pandemic hit, live performances were suspended, and the team had to navigate a new path through the shutdown and ensuing social unrest.

Martin stressed the need for “nuance” as he discussed the Goodman. He referred to Falls and the Goodman executive director Roche Schulfer each as a “mentor” and “dear, dear friend” yet said his experiences there and at Williamstown and Trinity Rep solidified his determination to pursue a leadership position.

“What I wasn’t interested in doing any longer was being the Black or brown shield and token within some of these larger institutions that had snatched me up,” he said.

A few miles north of the Goodman, Victory Gardens had its own problems.

In 2001, Victory Gardens became the third Chicago recipient of the Tony Award for Outstanding Regional Theater. When Dennis Zacek, the first artistic director, announced his retirement in 2010 after 34 years, the board named the acclaimed director and playwright Chay Yew as his successor, making Yew a rare artistic director of color at a major American theater.

Yew shook things up over his nine years in the top job, bringing in his own ensemble of playwrights while aiming for a younger, more diverse audience and tallying his share of successes. (Lucas Hnath’s “Hillary and Clinton” had a Broadway production in 2019.) After Yew announced his departure, the board in May 2020 named Erica Daniels, already its executive director, as its new executive artistic director. In response the playwrights’ group resigned, blasting the board for not communicating with the theater’s artists or for conducting a national search.

The administration’s decision in early June to board up the theater’s frontage — at a time when other theaters in Chicago and New York were opening their doors to protesters decrying racial injustice — inflamed tensions. About 100 activists assembled outside the Biograph on June 6 and posted messages such as “BLACK LIVES MATTER. But do they matter to this theater?”

“I was one of the loudmouths yelling at them, and months later they asked me, ‘Do you want to be one of the people who helps us chose our next artistic director?’” said Brown, the “School Girls” director. “Victory Gardens’ board has done more work at transformation than anyone else I’ve seen.”

She was pleased with the choice of Martin, saying, “I think this is an opportunity to show everyone in the national theater forum what it really can look like to gut rehab a historically white institution.”

Falls said seeing Martin leave the Goodman was “bittersweet,” but “it’s a fantastic moment for him and the city of Chicago and nationally. He’s an extraordinary person and a wonderful artist who brings a plethora of skills that most people do not have in running a theater.”

Like just about every theater company, Victory Gardens is trying to figure out when and how it will welcome live audiences back into the building.

Martin said he also intends to use his the connections he made at Williamstown to give more Victory Gardens productions an afterlife in New York and elsewhere. And he expressed interest in bringing back older Victory Gardens playwrights to foster “larger intergenerational conversations.”

“But at the same time, yeah, I’m going to have some new writers, ” he said, “because I know a lot of dope writers.”

He spoke most energetically about the need for Victory Gardens, onstage and off, to reflect and engage with the city’s broad range of communities. “The theater’s mission literally says to be a theater for all,” he said.

He hopes to draw on the wisdom of an emerging “cohort” of fellow artistic directors of color in theater — not to mention the inspiration of that Sankofa bird — to pull it off.

“If I figured out how to get Black people to come to a theater in Des Moines,” he said, “I can probably figure out how to get all peoples within this larger beautiful city to come out as well.”