The stars of Pet Tube are modeling the radical caretaking of strange animals. But they are only human. 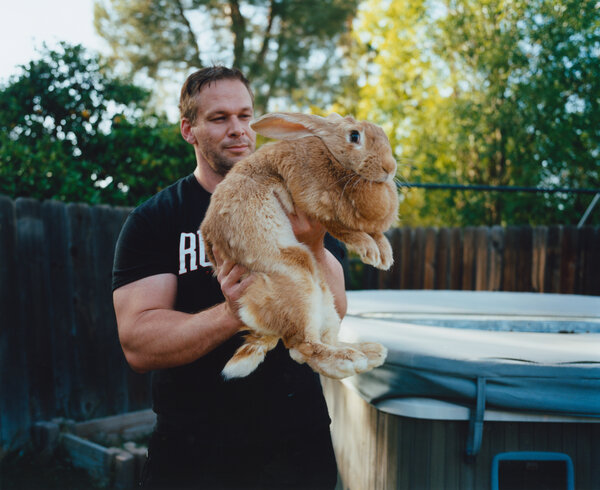 Tomas Pasiecznik lives in New Jersey with his parents, his dog and 26 other species of animals, including a reticulated python, a Chilean rose hair tarantula, a colony of Central American giant cave cockroaches and an African pygmy hedgehog named Chloe. That count does not include all the animals that Pasiecznik acquires to feed to his other animals. When we spoke on a recent afternoon, over Zoom, Pasiecznik dipped out of view for a moment and returned with two electric blue hornworms wriggling in his palm — dinner for his scorpions and tarantulas. “They’re super cool,” he said. “I have a hard time feeding these. I’d rather just, like, watch them turn into moths and stuff.”

Pasiecznik is 22, with a slight frame and a confusingly appealing fashion sense. He can wear a voluminous logo T-shirt and tight checkered pants — basically what I wore in middle school in the 1990s, except I looked like a freak and he looks incredible. He is the kind of young person who speaks earnestly about his passions: “My two main passions are animals and technology,” he said. On Instagram and YouTube, he posts as Tomas Pasie, and he is a denizen of an internet niche known as Pet Tube: a community of people who film their numerous and exotic animals.

At the moment, Pasiecznik has 31 animals (his cockroach and powder orange isopod colonies are too unwieldy to calculate as individuals, so he counts each colony as one pet). This is a relatively modest number for him. His most popular videos of all time include “Feeding my 31 tarantulas (GONE WRONG)” (3.7 million views), “FEEDING ALL MY ANIMALS (100+ PETS) [INSANE]” (1.6 million views) and the Spanish-language version of that video, “ALIMENTANDO A TODOS MIS ANIMALES (+100 MASCOTAS) *INCREÍBLE*” (1.8 million views).

Pasiecznik grew up watching YouTube (“I’ve been passionate about YouTube since I was literally a kid”), and his content is attuned to satisfy the platform’s impulses: It marries the demands for eye-popping oddities and hyper-practical how-tos. In a typical video, he speaks to the camera over synthesized stock music, projecting perfunctory competence as he instructs his viewers in the details of raising spiders, preparing sausages for lizards and properly humidifying a chameleon enclosure. He promotes his work with colorful photographic collages featuring a central image of his face flanked by a bunch of weird animals. The titles of his videos emphasize the “insane” nature of his animal “collection.” In 2018, Ripley’s Believe It Or Not featured him as a “prolific collector” of “crazy pets.” But Pasiecznik resists that characterization.

“I don’t like using the term ‘collection,’” he said. He used to amass stacks and stacks of Monster energy drink cans — that was a collection. His pets are individuals whom he cares for and loves. Pasiecznik credits his mother for his empathy toward strange creatures. “She really taught me to love every animal,” he said. “Even the tiniest ones.”

Pasiecznik was born in Argentina — Spanish was his first language — and after moving to the United States “with literally nothing” and occupying a series of rental apartments, his family moved into its own home in suburban New Jersey, where animal ownership also represented absolute freedom. Now there was no landlord to stop Pasiecznik from having a snake, or a lot of snakes. In high school, Pasiecznik won the “Most Unique Male” superlative, appearing in his yearbook in a T-shirt that said: “I’m a reptile guy. Just like a normal guy, except much cooler.” Sometimes his friends would joke about murdering his bugs which he tolerated. “They might not have known they were being rude when they said, ‘Oooh, I’m going to step on it,’” he said. “But I literally raised that spider since it was” — he inched his pointer finger toward his thumb until the distance between them was almost imperceptible — “thiiiiiis big.”

Pet Tube is a funny little scene. Its personalities include Emzotic, a British former zookeeper turned YouTuber; Taylor Nicole Dean, a gothy reptile enthusiast who just returned to YouTube after pausing her channel for more than a year to focus on her sobriety; Marlene Mc’Cohen, an actress and bird person who crafts little personas for each of her dozen parrots; and Thmpsn, a classical violinist and influencer who surrounds himself with a coterie of snakes, one enormous rabbit and various women with enormous breast implants.

On its surface, the content can seem to emphasize the exotic nature of the animal “collection” and the domestication of the wild inside the suburban home. Part of its appeal is the pure sight gag of a parrot soaring over a taupe carpetscape or a pile of snakes slithering on a piano. But seen another way, its figures represent a radical commitment to caretaking, often for animals that most people have not considered applying care to. They are people who love animals, even strange animals, even potentially revolting swarms of animals.

The idyllic vibe of this place is destabilized by a persistent critique: Perhaps its caretaker stars should not love every animal; perhaps there is such a thing as having too many pets. Occasionally, prominent Pet Tubers are accused of hoarding or neglect. Sometimes their pets — as is the tragic fate of all creatures on this Earth — die. In between offerings of condolences, commenters may question whether the life span of a deceased pet was appropriately long, and speculate as to whether the Pet Tuber was in any way responsible for its demise. These critics emphasize the duty of animal YouTubers to model responsible human-animal relations, and many Pet Tubers engage deeply with that prompt, too. Pet Tube is a genre about celebrating animals owned by human beings, but it is also always asking: Why should human beings own animals?

When I spoke with Pasiecznik, he was sitting in front of a computer in a low-lit converted garage with a paunchy brown couch and a tower of reptile enclosures visible around him. Atop the couch, he had leaned a copy of his “Ripley’s Believe It Or Not” appearance and a YouTube plaque marking his 100,000th subscriber. His online presence had made me so familiar with this backdrop that, when he materialized in my Zoom window, it gave the impression of one of those paintings in a haunted mansion that suddenly comes to life.

In his videos and Instagram posts, Pasiecznik’s performance of expertise can tend to obscure the emotional depths of pet stewardship. He recently graduated from the New Jersey Institute of Technology, and he slowed his YouTube output while he focused on college and the animals themselves. When we spoke, his 7-year-old chameleon Rango had just died (after an appropriate amount of time for a domesticated chameleon to be alive). Rango was, at the moment, in Pasiecznik’s freezer, awaiting Pasiecznik’s determination of how to properly send him off; he is considering preserving the bodies of his deceased pets in the hopes of donating them to some kind of museum. I asked him whether he learned about death as a child from owning so many animals, and for a moment he was silent. “I’m really emotional when it comes to all the animals,” he said. “I’m getting emotional right now.” He suggested I watch a YouTube video he had posted on the subject several years earlier.

That night, I searched around YouTube until I found the video. It is titled “He Died … My First Pet Lizard (FULL STORY)” and is illustrated with a photograph of a young Pasiecznik proudly holding a slender little creature in his hands. A big, yellow pensive-face emoji looms over the image.

In the video, Pasiecznik addresses the camera over a relentless electronic melody. He explains that he acquired Seth, a long-tailed grass lizard, from PetSmart when he was 5 years old. He had wanted a snake, but he wasn’t allowed to get a snake, so he got the lizard that looked the most like a snake. He loved Seth so much that he couldn’t put him down. “I did what nobody should do,” Pasiecznik said. “I held my lizard for too much without letting it get settled.”

The next morning, after holding and loving it for so long, Pasiecznik discovered a macabre scene in Seth’s terrarium. The lizard was dead. His mouth was filled with dirt. “It was all my fault,” Pasiecznik said. “I was holding it too much.”

This was a very sad story about a child and his lizard. But it was also a testament to how slickly YouTube has asserted itself into the animal-human relationship, shaping our most foundational emotional experiences to fit its technological specifications. The video’s description reads: “The first lizard I ever got died …. THE DAY AFTER I GOT IT! He was a long-tailed lizard from PetSmart! I was only 5 years old! Keeping reptiles as pets is amazing! Pet lizards, pet snakes, and pet frogs are all GREAT!”

Surfacing is a column that explores the intersection of art and life, produced by Alicia DeSantis, Jolie Ruben, Tala Safie and Josephine Sedgwick.