Jenna Ortega’s dance for her Addams Family character is a viral sensation, but why? It is disarming and defiant: the dance of a nonconformist.

Send any friend a story

As a subscriber, you have 10 gift articles to give each month. Anyone can read what you share. 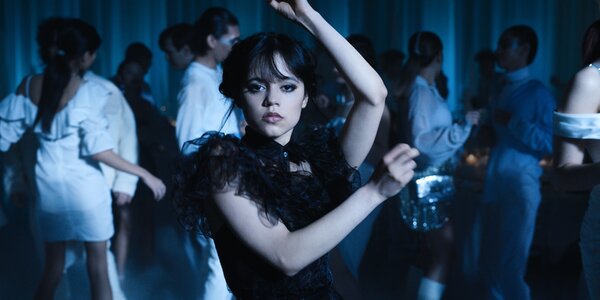 What is it about the Wednesday dance? She holds you captive from her very first glare.

Bangs inch past her eyebrows as she twists her shoulders and then, with a wild insouciance, flings one arm above her head and then the other before taking commanding steps along a straight line. It’s that crisp Wednesday walk, it’s that cold Wednesday stare.

But with this dance, Jenna Ortega, who plays the title role in “Wednesday” on Netflix, has something to say, something to show. From one disembodied twitch to the next, the dance builds on theatrical boldness, on eccentric humor. It’s the defiant dance of a nonconformist. It’s a celebration of weird.

Choreographed by Ortega, who brings an abundance of dark charm to her portrayal of Wednesday Addams, the viral dance from episode four, “Woe What a Night,” is experiencing a robust afterlife on TikTok as countless teens live out the steps on their own terms. It hasn’t been bad for the Cramps, either. The song she dances to, that band’s 1981 classic “Goo Goo Muck,” has seen an uptick in streams.

It’s also a choreographic extension of how Wednesday moves through the world: direct, demonic and completely disarming.

In the show, Ortega fences; she fights. Her sarcasm may render her features expressionless, but behind the facade of her stiffness — holding her arms down by her sides, she seems more like an avatar than a teenage girl — her Wednesday is ready to pounce. When she dances, she is just as direct, taking on a postmodern approach with a face that gives nothing away. She doesn’t comment on her movement; she executes it. The choreography’s awkward whimsy comes through in her body and her body alone.

While it can be hard to respect yet another dance that takes inspiration from Bob Fosse, the choreographer whose stylized movement strikes a powerful chord with so many — certainly Beyoncé — the Wednesday is different. Ortega offered thanks on Twitter to Fosse and others who influenced her dance: Lisa Loring, who played a younger Wednesday on “The Addams Family” on TV in the 1960s; the singers Siouxsie Sioux and Lene Lovich; the actor Denis Lavant and “archival footage of goths dancing in clubs in the 80’s.”

“Helped me out on this one,” Ortega wrote on Twitter.

But as the influences stream out of Ortega’s body, they somehow become her own. The most charming dates to a vintage scene from the 1960s series in which Loring’s Wednesday teaches Lurch how to dance “the Drew.” As if on ice, she swivels her tiny feet at breakneck speed and swings her arms forward and back, encouraging Lurch to give it a whirl: “Loosen up a little,” she says, “let yourself go!”

Those words are at the heart of Ortega’s number, which, like many captivating dances on camera, comes as a surprise: Lavant’s fearless dance at the end of the film “Beau Travail,” the famous, often-referenced cafe scene in Jean-Luc Godard’s “Bande à part.” Other film scenes that took inspiration from “Bande à part” feel close to the Wednesday dance, too: the Sonic Youth dance in Hal Hartley’s “Simple Men” and the gritty groove that Uma Thurman and John Travolta create in “Pulp Fiction.”

Ortega, like Lavant, dances a solo. Wearing a high-drama dress with cascading black ruffles — her classmates are boring, in white — she cuts through space the way her character speaks: abrupt, sharp and stinging, but with momentary dashes of soulfulness. In Loring’s words, she loosens up; she lets herself go. Within reason. This isn’t “Singin’ in the Rain” — the very idea of finding solace in a puddle would make Wednesday’s eyes roll — but a twisted left turn down a slippery path. With jutting hips and arms pushed behind back, Ortega glides in and out of the frame to dance like her Wednesday would.

She draws on Wednesday’s deadpan charm with a start-and-stop sequencing of movements. At one point, she rocks her head from side to side like the bouncing Peanuts at Christmastime. In another, she disappears, only to return — in a reference to the character Thing — with her hand tapping the shoulder of her friend. In this swift fall and recovery, she hints at some of Lavant’s bracing swagger in “Beau Travail.”

As Ortega glides from one movement experiment to the next — there are the famous Fosse arm strikes while tipping forward, emphatic body rolls and snaking arms in a nod to Morticia Addams’s castanets — she seems free, as if a dancing spirit has been unleashed within her. She moves from her guts. Who cares what anyone thinks? That’s the point of the Wednesday dance: It’s a dance of empowerment, and it’s for everyone. Dance like you don’t care who’s watching, and above all, be weird. That’s what Wednesday would do.