Tiger Woods’ fans, friends, and family were horrified when the news broke that the golf star had been in a car crash in Los Angeles. The wreck was so bad that the jaws of life were required to extract Woods from the destroyed vehicle before he was rushed to the hospital. Now, Woods — who recently took to Twitter to thank his fellow golfers for their support — is on the road to recovery and it seems as though his spirits are high. During an appearance on The Tonight Show Starring Jimmy Fallon, Rory McIlroy shared an update on Woods’ condition. 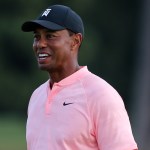 McIlroy, who is one of Woods’ best friends, reassured fans that the golf legend is “doing better” and believes he could be discharged from the hospital in the next week or so. “He’s doing better,” Rory told Fallon. “Hopefully if things go well over the next week or so he might be able to get home and start recovery at home, which will be great for him, see his kids see his family.”

Woods has reportedly been hesitant about his kids seeing the full extent of his injuries, as a source told HollywoodLife: “Tiger has been in contact with his kids, but while he recovers, he’s fine with them being with [their mom] Elin [Nordegren] in Florida.” The insider added, “He feels that it would be too dramatic for them to see their dad hurt. He’s reassured them that he’s getting better each day and everything’s going to be all right. Everyone’s taking things day by day.”

Luckily, it looks like Woods is in pretty good spirits — McIlroy revealed that Woods has been sending him “some words of encouragement” as McIlroy continues the PGA tour. “Even from the hospital bed, he’s still giving me some heat,” he laughed.

Before you go, click here to see celebrities who have struggled with drug or alcohol addiction.