The production, which starts Tuesday in Dallas, is the first Broadway tour back onstage, a test as American theaters seek to rebound from the pandemic shutdown.

With a five-week run in Dallas, “Wicked” is set to become the first Broadway show to resume touring since the start of the coronavirus pandemic. Talia Suskauer, shown here rehearsing “The Wizard and I,” plays Elphaba.Credit…Cooper Neill for The New York Times

DALLAS — Talia Suskauer knows what it’s like to be green. She remembers the feel of pigment and powder on her arms, neck, and face; how the color seemed to seep into her pores and linger behind her ears; what it was like to see a strange but familiar self staring back from a mirror.

She didn’t know that, on a hot July afternoon in Dallas, getting painted once again would make her cry.

Sixteen months after the touring production of “Wicked” in which Suskauer stars as the green-skinned witch Elphaba was forced to close, the cast and crew have reassembled in Dallas for a high-stakes effort to start again. The show’s first performance here on Tuesday, the first by any touring Broadway production since the coronavirus pandemic shut down shows across the nation, will be a sign of hope for a battered theater industry, but also a test at a time when the spread of the Delta variant has Americans once again on edge. 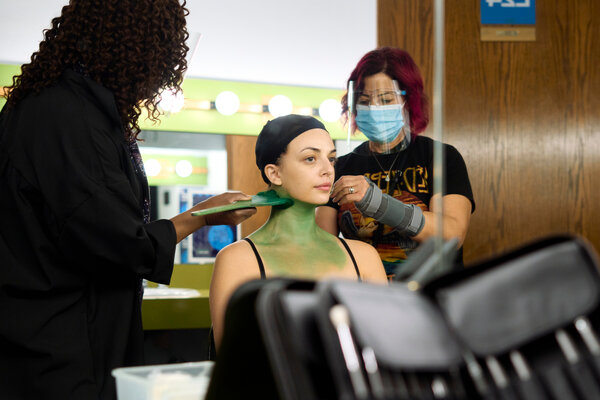 “Each show is going to be someone’s first time back at the theater, so each show is going to be emotional,” Suskauer said. She had her own emotions to draw on, tearing up as she eased back into the makeup chair for the first time since the tour’s March 13, 2020, shutdown in Madison, Wis. “I felt like our purpose was being stripped away,” she said, “and now, to come back, it’s overwhelming.”

Touring is a huge part of the commercial theater ecosystem. It’s big money — in the most recent full theater season, 18.5 million people attended touring shows in North America, and those productions grossed $1.6 billion.

The resumption of touring will once again allow people who live far from New York to see Broadway titles. And it will provide much-needed income for actors, musicians and other theater workers left unemployed by the pandemic.

“If anybody doesn’t love a national tour, there’s something they’re not getting,” said Cleavant Derricks, who in 1982 won a Tony Award for his role in the original Broadway production of “Dreamgirls,” and who now plays the wizard in the “Wicked” tour. “You’re going from state to state, meeting different people, seeing different aspects of the country, and each night applause comes your way. How can you beat something like that?”

A revisionist back story for “The Wizard of Oz,” “Wicked” is a musical theater juggernaut that opened on Broadway in 2003, has sold more than $5 billion worth of tickets and has been seen by more than 60 million people in 100 cities around the world. The show, which revolves around a fraught friendship between the witches Elphaba and Glinda, has been running so long that Suskauer and her co-star and fellow Floridian, Allison Bailey, both saw it as children.