It’s only March, but the “Zodiac Suite,” written in 1945 by the composer and jazz pianist Mary Lou Williams, is already enjoying a momentous 2021.

Exciting new performances have recently been released of two versions of the suite: for orchestra — in this case the mighty New York Philharmonic — and for small jazz combo. While striking in their differences, these interpretations together point to the quality and artistic farsightedness of a musician that Duke Ellington once complimented as being “perpetually contemporary.”

His admiration stemmed at least in part from the inventive work Williams (1910-81) delivered as an arranger in the 1930s and ’40s for Ellington, Louis Armstrong, Benny Goodman and others. But while those arrangements, as well as her own playing and compositions, earned Williams fame at the height of the swing era, she also helped nurture the bebop wave that ultimately supplanted it: She gave lessons to players like Thelonious Monk, and in 1957, long after bop’s ascent, Dizzy Gillespie brought Williams onstage at the Newport Jazz Festival.

When he did, what did she play? Selections from the “Zodiac Suite.”

“Zodiac” — a series of 12 pieces inspired by musical associates of Williams who were born under the respective constellations — was clearly important to her. In 1945, she recorded a trio version, featuring her own piano playing (plus bass and percussion) for the Asch imprint, later reissued by Smithsonian Folkways.

At the end of that year, she presented a version for chamber orchestra at Town Hall in New York, conducted by Milton Orent, whom Williams credited with having a hand in the orchestration. (Exactly how much of a hand remains hard to pin down.) The following summer came full symphonic orchestrations of three of the 12 movements, with the Carnegie Pops Orchestra.

Of the chamber version heard at Town Hall, a New York Times reviewer deemed it a “rather ambitious work,” while also promulgating that era’s blinkered classification of jazz as subordinate to classical music in terms of sophistication. (An acetate recording of the under-rehearsed Town Hall date is out of print.) While Williams would later recall that the Carnegie Pops musicians loved the selections she arranged for them, all the orchestral versions — chamber and full — eventually fell into neglect.

But as part of the New York Philharmonic’s latest online presentation, “An All-American Program,” the orchestra has partnered with the pianist Aaron Diehl, skilled at both classical and jazz repertory, in selections from the chamber-orchestra version of the “Zodiac Suite.” Conducted by Tito Muñoz, in his Philharmonic debut, the concert is streaming until June 6.

“There were some musicians who were like, ‘Oh, I don’t play jazz, but we really want to do this,’” Diehl said in an interview. “That’s just a beautiful thing to see. And I think it could be a sign that musicians are willing to step outside of their comfort zone and really collaborate in ways that previously hadn’t been explored before.” 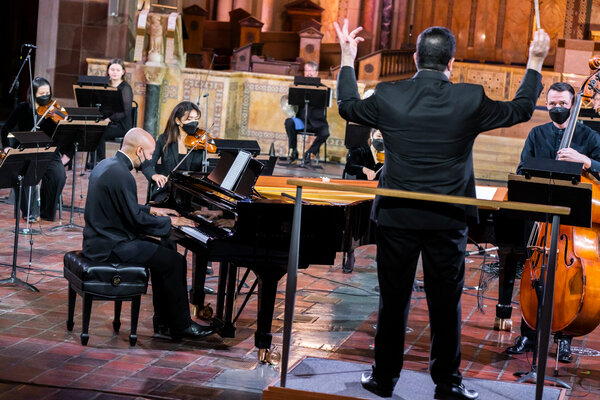 Because of rehearsal constraints, the Philharmonic’s program includes only four of the sections, alongside works by William Grant Still, Charles Ives and Aaron Copland. But the crispness of the take on Williams’s music makes it difficult to quibble about the suite being incomplete.

In “Leo,” the violinist Sheryl Staples brings a folkloric feel to her solo. And the players handle the surprising transitions of “Scorpio” — switching between gloomy ostinato patterns and joyous tutti exclamations, then back again — with snap and poise. Diehl’s contributions are crucial in making it all hang together, particularly during the most traditionally jazzy portion of the work, “Virgo,” in which he also covers a part originally performed by a jazz trumpeter.

Diehl said he thinks of the work’s piano part as “its own orchestra” or “an ensemble within an ensemble.” In “Virgo,” he channels the Kansas City jazz tradition from which Williams learned much, but when the piano makes an entrance in “Leo,” he revels in “those big chords that are coming in, almost like Rachmaninoff or Tchaikovsky or something like that.”

Diehl hopes to mount a full performance of the piece, with orchestra, once pandemic restrictions recede. But he said he appreciated how game the Philharmonic was in approaching Williams’s style, even in part: “They took it on. And I applaud them for doing it.”

Doing it wasn’t nothing: Diehl said that after he became aware of a chamber score, produced by Jeffrey Sultanof and Rob DuBoff and published by Jazz Lines Publications, he had unsuccessfully proposed the piece to a number of orchestras. “I think there’s a lot of reticence,” he said. “Not because of the piece itself. It’s more because of musicians not being comfortable with the idioms.”

But he emphasized how important it was to preserve — and further — Williams’s legacy. “And the only way that’s going to happen,” he said, “is if musicians — institutions — tackle this and take this on and see what they think of it.”

Last month, the pianist Chris Pattishall released his own take on Williams’s more improvisatory jazz-combo approach to the suite. (The recording is called, simply, “Zodiac.”) This adventurous yet respectful reading joins prior jazz adaptations of the suite like those of the pianist Geri Allen, who was the headliner on a recording of the entire work in the 2000s, as well as the bassist Oscar Pettiford, who played a version of “Scorpio” in the 1950s.

Pattishall’s imaginative version is alert to the work’s quick-changing spirit. In his notes, he likens those elements to channel-surfing, as well as to hip-hop productions by Madlib. That hip-hop influence can be heard in Pattishall’s approach to “Taurus,” which thrums with some unexpectedly insistent beat work.

However “Zodiac Suite” is heard, a good performance reflects elements of Williams’s early, swing-era music, as well as her studies of then-contemporary composers like Paul Hindemith. In “Morning Glory,” a biography of Williams, Linda Dahl cites chord changes in “Zodiac” as reflective of her ear for modern harmony — and also quotes Williams herself on the “Gemini” section, dedicated to colleagues like Benny Goodman and Harold Baker: “These people are at home doing ‘two things at one time’ and so in my music I have used two themes, in discord — the bass moving in one direction and the piano in the other — but equally balanced to set the pattern of those born under the Sign of the Twin.”

Much of “Zodiac” seems to employ this sense of multiple things going on, either simultaneously or in rapid succession, just as Williams’s career encompassed multiple and overlapping approaches to style and genre.

“While having witnessed and been involved in the early phases of jazz development,” Diehl said, Williams “continuously challenged audience expectations of who she was — her identity as a Black American woman. She was just as critical a figure as her male colleagues — somebody like Duke Ellington. But she didn’t get the credit she deserved.”