Yoshi Wada, a Japanese-born composer and artist who drew a following creating cacophonous, minimalist performances on homemade instruments and was a member of the Fluxus performance art movement that took root in New York in the 1960s, died on May 18 at his home in Manhattan. He was 77.

His son and musical collaborator, Tashi Wada, confirmed the death but said the cause was not known.

Yoshi Wada’s music was characterized by dense, sustained sounds that could create mind-bending acoustic effects. He borrowed widely from different musical traditions — Indian ragas, Macedonian folk singing and Scottish bagpipes — all while supporting his musical life by working in construction.

In one early technique, in the 1970s, he attached mouthpieces to plumbing pipes that could extend more than 20 feet. In ritualistic, multihour concerts, he immersed listeners in the richly resonant drones that emanated from this Alphorn-like instrument, which he called an Earth Horn.

Combined with static electronics, the pulsating sonorities of the pipes offered a new take on the minimalist style then in vogue.

“The result was certainly one of the more coloristically attractive of the many recent instances of minimalist, steady-state sound that one hears these days,” John Rockwell of The New York Times wrote of one Wada concert in 1974, at the Kitchen in Lower Manhattan, “rather like an evening’s worth of the very beginning of Wagner’s ‘Rheingold.’”

Mr. Wada’s idiosyncratic singing and use of bagpipes became the basis for two important albums in the 1980s, released on free-jazz labels. One, “Lament for the Rise and Fall of the Elephantine Crocodile,” was recorded in an empty swimming pool; to delve more deeply into the project, Mr. Wada slept in the pool. The other release, “Off the Wall,” made in West Berlin through a grant he had received, combined bagpipes with a handcrafted organ and percussion.

“What I’d like to get is a feeling of the endless space,” he said in a 1987 interview. “I want to create this feeling of infinity by sound.”

Mr. Wada also created elaborate sculptural sound installations. For “The Appointed Cloud,” in 1987, he hung organ pipes and gongs in the Great Hall of the New York Hall of Science in Flushing Meadows Corona Park in Queens. Guided by a computer program developed by David Rayna, visitors would press buttons to change the sound of the composition in real-time.

“A lot of young children came,” Mr. Wada recalled in 2016, “and they went crazy pushing the buttons and enjoyed it quite a lot.” 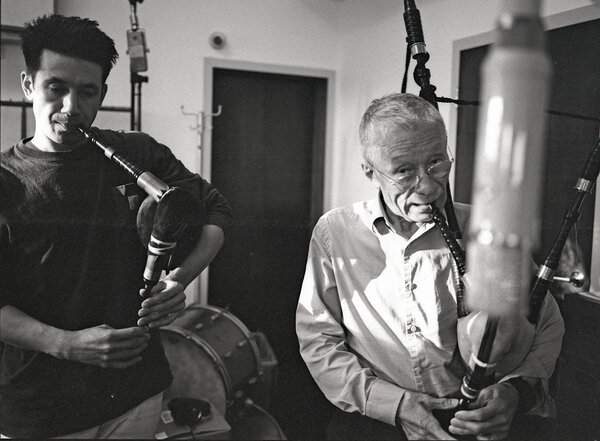 Yoshimasa Wada was born on Nov. 11, 1943, in Kyoto, Japan, to Shukitchi Wada, an architect, and Kino Imakita. His father died in World War II, and his childhood was marked by the hardships of the postwar years.

Yoshi had powerful early experiences hearing monks chant in a local Zen temple. Enthralled by Sonny Rollins and Ornette Coleman, he took up jazz saxophone as a teenager. He studied sculpture at the Kyoto City University of Fine Arts and sought out avant-garde collectives in Japan, like the Gutai group and Hi-Red Center.

“It was looking at the moon in a Zen garden for a whole night,” Mr. Wada later recalled of a “happening” presented by the artist and musician Yoko Ono. “It was quite a nice feeling. I remember that afterwards I took a bath and went home.”

After receiving his bachelor’s in fine arts degree, he moved to New York in 1967. George Maciunas, widely credited as the founder of the Fluxus movement, lived in Mr. Wada’s building. Soon, Mr. Wada was enmeshed with Fluxus’s high-minded absurdism, making music from cardboard tubes and syncopated sneezes.

Mr. Maciunas had started purchasing abandoned buildings in the area of Manhattan that would become known as SoHo and converting them into artists’ co-ops, and he conscripted Mr. Wada to help with the carpentry and plumbing.

Never having trained in music formally, Mr. Wada took lessons in electronic music from the composer La Monte Young and became, in the early 1970s, a disciple of the guru Pandit Pran Nath, who taught North Indian classical singing in Mr. Young’s studio.

“He tried to absorb everything, at a very high spiritual level,” Mr. Young said of Mr. Wada in an interview. “He was a very pure and noble person.”

His fascination with the microtonal inflections and hypnotic drones of Indian ragas, along with his dissatisfaction with standard instruments, led Mr. Wada to create the Earth Horns. But his musical interests continued to expand. He heard Macedonian folk singing at a festival and decided to study it, then started a small choir to sing eerie, modal improvisations. He attended Scottish Highland games in the late 1970s and was struck by the possibilities of the bagpipe.

After learning the solo bagpipe style known as “piobaireachd,” Mr. Wada built his own “adapted” version of the instrument — with plumbing fittings, pipes and air compressors — for evening-length performances that fused composition and improvisation.

“In studying all of these different traditions, one thing he always talked about was that he wanted to find ways to make them his own,” his son, Tashi, said in an interview.

Mr. Wada supported his family by continuing his construction work, even starting his own contracting company. He stored his menagerie of makeshift instruments in the subbasement of their building, one of those that Mr. Maciunas had developed. Tashi Wada recalled that a childhood drum kit once found its way into one of his father’s sound installations.

Beginning in 2009, Tashi Wada, who is also an experimental composer, helped reissue his father’s older recordings, which are now available on the label Saltern. That year, the Emily Harvey Foundation, which promotes the arts and which had preserved some of Mr. Wada’s Earth Horns, invited him to reprise his 1970s performances. The original electronic drone system was lost to history; instead, Tashi re-created the parts live. Father and son became regular musical collaborators.

Mr. Wada’s first wife was Barbara Stewart. He married Marilyn Bogerd in 1985, and they later divorced. In addition to their son, he is survived by their daughter, Manon Bogerd Wada, and a granddaughter.

In 2016, Tashi Wada interviewed his father for the arts magazine BOMB and asked him about the hallucinatory effects that he said he had experienced in the 1980s while practicing his music in a small studio space in West Berlin.

“I wasn’t taking drugs at that time,” Mr. Wada said. “It wasn’t needed. Sound draws me into a dreamlike world, when the sound is in tune. It’s a very good effect and keeps me awake.”