2GB host Ben Fordham has extended his lead in Sydney’s breakfast radio, while ABC Sydney’s Richard Glover leapfrogged the competition in the drive slot in the first radio ratings of the year.

Fordham saw his audience share increase to a commanding 18.1 per cent, up one per cent on his closing ratings from 2020. It’s Fordham’s best ever result since he took over the 2GB breakfast chair from Alan Jones last June. 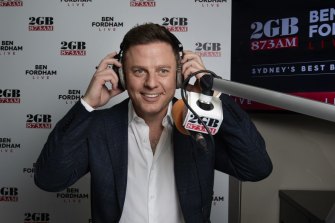 2GB – which is owned by Nine Entertainment Co, the owner of this masthead – remains Sydney’s top radio station with an overall audience share of 14.4 per cent, up 0.6 per cent on December’s survey.

The station also had a strong result in the 7pm-midnight evening slot, which takes in much of John Stanley’s 8pm-midnight show. The veteran talkback host saw his audience share in the timeslot increase to a massive 20.2 per cent, up 2.9 per cent on December’s survey.

Greg Byrnes, Nine Radio’s head of content said the survey proves that 2GB is the “must listen” radio station in Sydney. “We are way out in front as number one and the audiences are getting even bigger,” he said.

The survey’s other major winner was ABC Sydney which saw impressive gains across the board to take its overall audience share to 12.2 per cent, up 3.7 per cent on December’s survey. 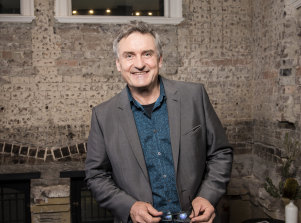 ABC Sydney’s Richard Glover is the winner in drive.

The station earned the survey’s biggest jump in the 7pm-midnight slot, which takes in Sarah Macdonald’s 7pm-10pm evening show, up 5.6 per cent to an audience share of 13 per cent.

A spokesperson for the station praised the strong results from Glover, Macdonald and James Valentine in the afternoon.

“We are pleased to see that we are reaching more people, with both our share and reach up significantly. We had a strong line-up over summer and we know our cricket coverage was popular, giving us a good lead into the first survey of the year.”

Elsewhere, 2Day FM’s latest shot at a breakfast revival with new hosts Dave Hughes, Ed Kavalee and Erin Molan saw minimal impact, up 0.2 per cent to an overall audience share of 4.4 per cent.

KIIS 1065 also experienced drops across its programming to endure the survey’s biggest overall downturn, down 1.8 per cent to an overall audience share of 9.7 per cent. The result sees them out of the top three stations in Sydney behind 2GB, ABC Sydney and SmoothFM 95.3.

The first radio survey of the year, conducted by market research company GFK, took in the period January 17 to February 27.