The rise of the true-crime genre has reached saturation point. Seemingly every second Friday, Netflix debuts a new docuseries about an infamous crime or killer, while podcasts about an unresolved death are now ubiquitous. The true-crime wave has even reached the ABC, which recently aired the second season of Exposed, a documentary series that reinvestigates headline-making cases. The show is indicative of true crime’s peculiar grip: it delivers both fascination and flaws. 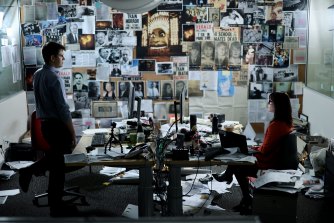 Exposed: The Ghost Train Fire, the successor to 2018’s Exposed: The Case of Keli Lane, sifts through the horrific fire inside the amusement park ride at Sydney’s Luna Park that killed seven people in June 1979. The blaze was so fierce that it took dental records to identify the victims, which you learn early on, and this knowledge steels you throughout the first episode, which inexorably interweaves detailed witness recollections to create a fearful rhythm. The ride’s automated cars, carrying excited patrons to their death, are a terrifyingly apt image.

The show is indicative of true crime’s peculiar grip: it delivers both fascination and flaws.

The editing in that extended sequence, and throughout the season, is skilful. There’s an entire team credited, but the resources the ABC can apply to Exposed don’t always help. Conceived and produced by Jaya Balendra and Caro Meldrum-Hanna, with the latter also on camera as lead reporter, the series overdoes the recreations and dramatic illustrations. The reconstructions of the actual fire, specifically credited to director John Mavety, move from the evocative to the exploitative: a shot portraying a father and two young sons, huddled and trapped as a voice explains their fate, is deeply unnecessary.

Sometimes the starkness of a participant’s testimony is degraded by a few seconds of out-of-focus movement or over-the-shoulder framing. In the first episode, Jason Holman – who was at Luna Park that night and lost four friends – recalls subsequently witnessing the moment Sid Billings, who lost his son Jonathan, actually realised what had transpired. “That’s the image that is most haunting,” Holman says, and his grim face confirms his words. Trying to recreate that moment, to awkwardly shoot an actor playing Sid Billings from behind, actually dilutes the interview’s crushing impact.

True crime often flirts with pulp imagery and procedural cliches; what should be lightly applied gets ladled on. It’s an issue for Exposed, which from the very first shot of the current credit sequence – Meldrum-Hanna in a car at night, windshield wipers on in the rain, Luna Park’s neon facade imposed on the screen – positions the Walkley Award-winning journalist as a dogged gumshoe detective working a case. 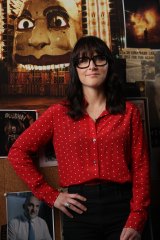 The question is whether Meldrum-Hanna’s involvement, as the investigator cracking the unsolved mystery, shapes how the story is presented. From the start Ghost Train Fire makes clear that the fire was suspicious, and the second episode is an exemplary deconstruction of how the police investigation erased crime-scene evidence and pressured several witnesses to change their statements to preserve the startlingly quick attribution of an “electrical fault”. When QC John Dunford, who appeared at the inquest, says that there were “police attempting to pervert the course of justice”, it’s a gripping peak, thoroughly detailed.

But if the “how” is so impressive, the “who” is problematic. The third and final episode follows threads to the late Abe Saffron, the notorious Sydney organised crime figure who carried the nickname “Mr Sin”. However, this isn’t a breakthrough. Even a cursory online check reveals Saffron – who was seeking to control the valuable harbourside site – has long been associated with the seven deaths. A 2007 Sydney Morning Herald story by investigative reporter Kate McClymont revealed that Saffron “was behind the fire”, with his niece providing confirmation.

This might explain why the conclusion of Ghost Train Fire is in part so truncated. Saffron’s involvement, which is outlined through his connection to corrupt police officers, may be a revelation for many viewers, but not the family members interviewed. Sid Billings, one of the parents Meldrum-Hanna presents her findings to, was quoted in McClymont’s 2007 piece. Ghost Train Fire never acknowledges her reporting or the information revealed.

The perception that Meldrum-Hanna is breaking a cold case clouds Ghost Train Fire, while The Keli Lane Story – the Sydney woman convicted in 2010 of the 1995 murder of her newborn daughter, Tegan – had a schism at its core. Lane, who is exclusively interviewed through phone calls from prison, may have suffered a mistrial, but Exposed can’t shine any substantive light on Lane’s claim that she gave Tegan to the baby’s father (who, along with Tegan, has never been found).

Exposed is a mystery in itself: the best qualities of both seasons – a damning and perceptive portrayal of the Manly community that shaped Keli Lane, then Ghost Train Fire’s explanation of the systematic corruption that once flourished in New South Wales – are at odds with the program’s performative true-crime framework. Ghost Train Fire grew its weekly audience, with the case being recognised by the New South Wales Coroner, but the most puzzling question it may have to answer is whether it can escape the cliches of true crime.

Find out the next TV shows, streaming series and movies to add to your must-sees. Sign up to get it every Thursday.