A Victorian aged care home operator has been hired by the Morrison government to vaccinate thousands of elderly residents who are still not immunised.

About 6000 of Victoria’s 44,000 private aged care residents have not yet been vaccinated, government figures show. 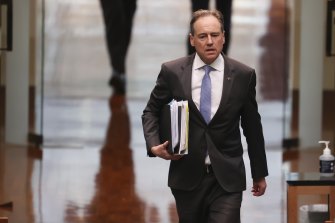 These residents were unable to receive a shot on the day the government’s two existing vaccination contractors, Aspen Medical and Healthcare Australia, visited their home.

In February, Canberra promised to vaccinate all aged care residents by Easter.

Aged care operator TLC was on Friday appointed to return to more than 100 homes in Victoria already visited by the two companies and vaccinate residents.

Aspen and Healthcare Australia are being paid $55 million between them as part of their contracts to vaccinate residents in all of Victoria’s private aged care homes. (Both are also working on homes outside Victoria as part of these contracts).

Both the Health Department and TLC chief executive Lou Pascuzzi declined to say how much the company would be paid to manage the mop-up vaccination contract. “We’re getting a flat per-vaccine rate,” Mr Pascuzzi said on Friday.

In February, a joint press release from Mr Hunt and Mr Colbeck declared vaccines would go to aged care homes within about six weeks from the start of the program. This would have seen the program completed in early April.

By Thursday, 57 per cent of Victorian aged care residents were fully vaccinated.

The operator of one private chain, who asked that his group of centres not be named because he feared it would affect its relationship with the federal government, said Aspen had visited its homes to vaccinate residents.

“By the time they came the second time, we had new admissions – so Aspen couldn’t do them. Other people just weren’t there on the day. No one has thought this through.”

TLC in April announced its 1500 residents and 2000 staff had been fully vaccinated.

Mr Pascuzzi said his company had anticipated delays in the government vaccination rollout across aged care, so went to Canberra and got permission to vaccinate its own residents and staff.

He said TLC’s working relationship with the Health Department, developed during the months it vaccinated its residents and workers, had helped it secure the contract to help immunise people in other homes this week.

“The executives and boards of the aged care industry in Australia have sat back and expected the government to spoon-feed them. Their lack of traction on the COVID-19 vaccination rollout is a perfect example of why that approach is not acceptable or sustainable,” he said.

He said vaccinating residents and staff was “solely the responsibility of the aged care providers who have a duty of care”.

Mr Pascuzzi said the vaccine rollout had been overseen by the Australian Health Protection Principal Committee and blame for what had gone wrong in aged care needed to be sheeted home to this group, not the government.

But Labor’s aged care spokeswoman Clare O’Neil said the addition of another contractor to visit homes in Victoria “tells us everything about how this government prioritises looking after our elderly”.

“The vaccine rollout in aged care has been a joke,” she said. “Vaccinating aged care residents was always going to be complex and difficult. Thinking this was going to be seamlessly done with two visits is and always was nonsensical. Why is this contract just being signed now?”

A spokesman for Mr Hunt said the Commonwealth had now completed first doses in 100 per cent of aged care homes around Australia, and that this new contract was to provide extra opportunities for “residents who declined, were unable due to illness or other circumstance or for whom consent was not given during previous vaccination rounds”.

There were also instances where residents could not be vaccinated due to illness, or were away for a medical appointment or with family, he said. “Residents are permitted to leave the facility and are not bound to attend the vaccinations, although it is highly encouraged.”

Aspen Medical was contacted for comment but did not respond.

A spokeswoman for Healthcare Australia said it had “completed all vaccinations assigned to it in Victoria under the department’s allocated schedules”.

Australian Nursing and Midwifery Federation state secretary Lisa Fitzpatrick said it was “extraordinary” the Morrison government was “getting yet another private contractor onboard”.

“I find it extraordinary the lengths that the Commonwealth will go to in order to cover their mistakes,” she said “But the main aim is to get people vaccinated, and it is a race.”

Stay across the most crucial developments related to the pandemic with the Coronavirus Update. Sign up to receive the weekly newsletter.