Now you see them… now you don’t! Incredible snaps of animals and people accidentally blending into the background will make you look twice

From people’s clothes blending into the background to animals who are tricky to spot against home interiors, these amusing optical illusions are bound to make you look twice.

The series of mind-boggling snaps from all over the world were collated by Bored Panda, sourced from an ‘accidental camouflage’ thread on Reddit which has been attracting posts since January 2017.

In one image, a black cat looks like its white feline companion’s shadow, while another pale grey moggy is difficult to spot as it pads across marble tiles.

Meanwhile a commuter whose socks match the floor of a train carriage creates an optical illusion of an invisible man in a suit. 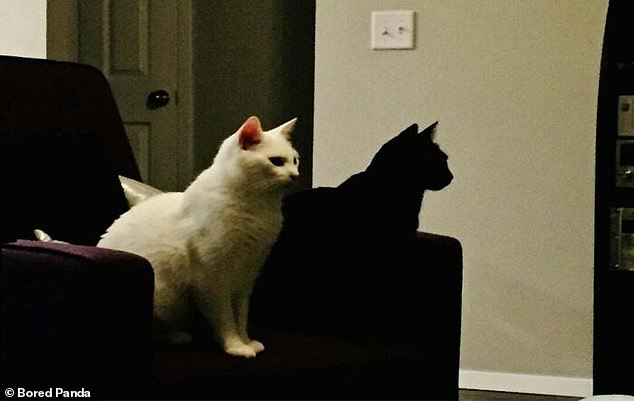 Me and my shadow! A white cat sits proudly beside its darker companion, who looks like a shadow on the wall on first glance 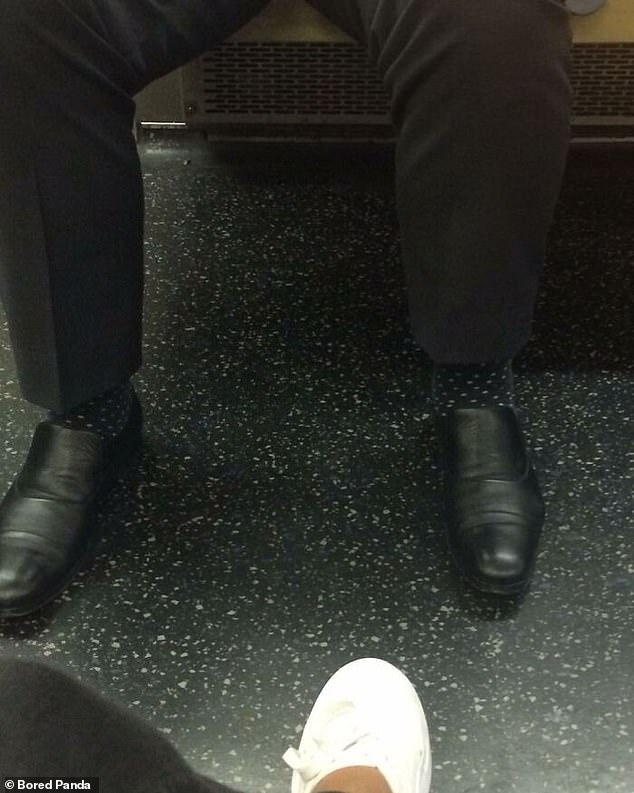 It’s the Invisible Man! A fellow passenger snapped a picture of this gentleman whose socks blended seamlessly with the floor, creating the illusion there was a gap between his shoes and trousers 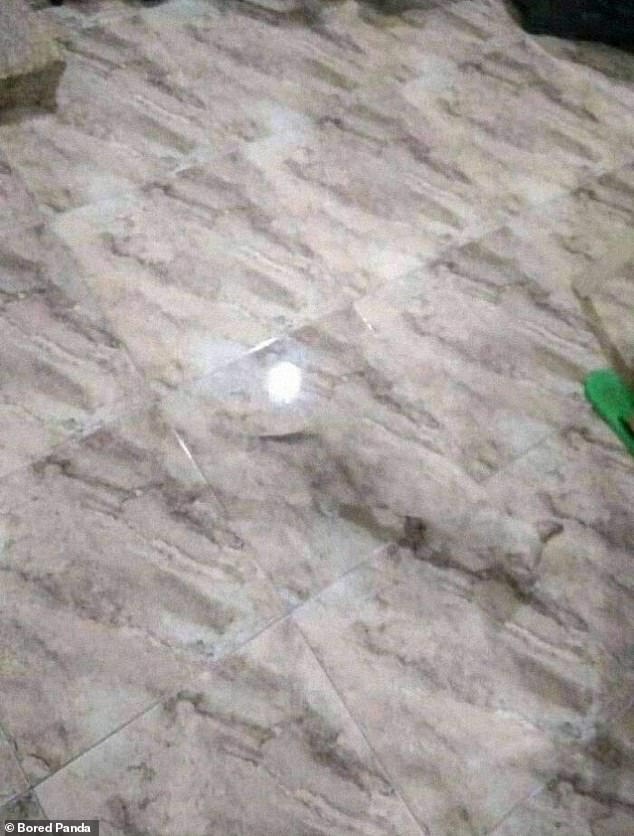 This pale grey cat risked getting stepped on as it made its way across a marble tiled floor, the colour of which perfectly matched its coat 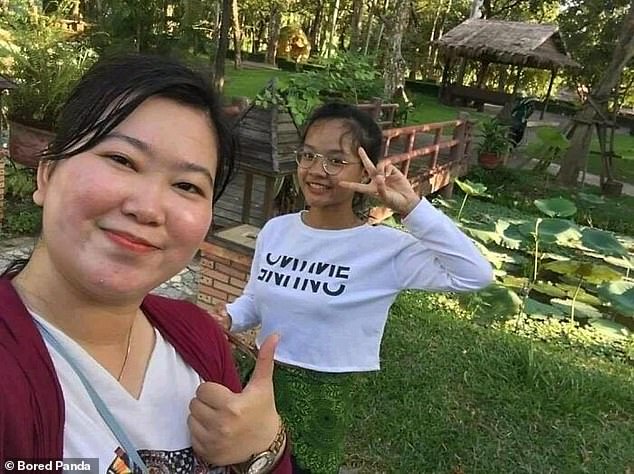 A woman looked like a floating torso in this selfie taken by her friend, courtesy of her green patterned trousers which blended into the grass background 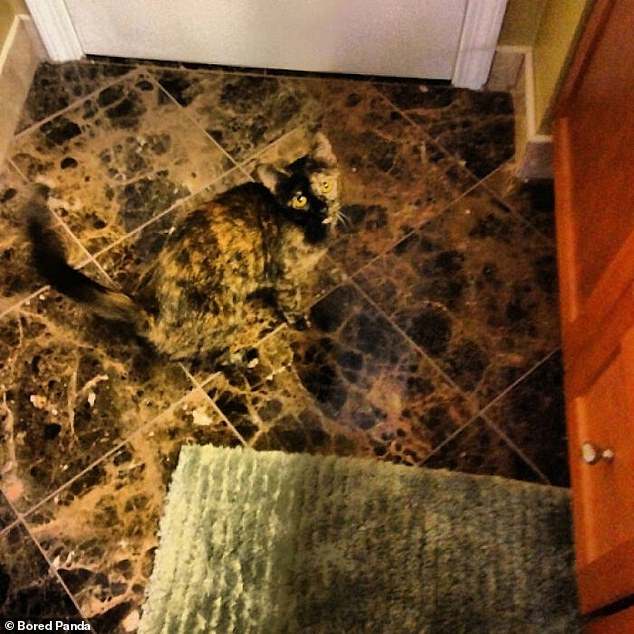 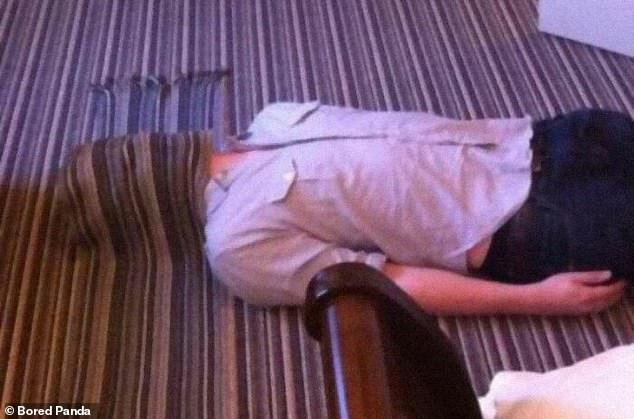 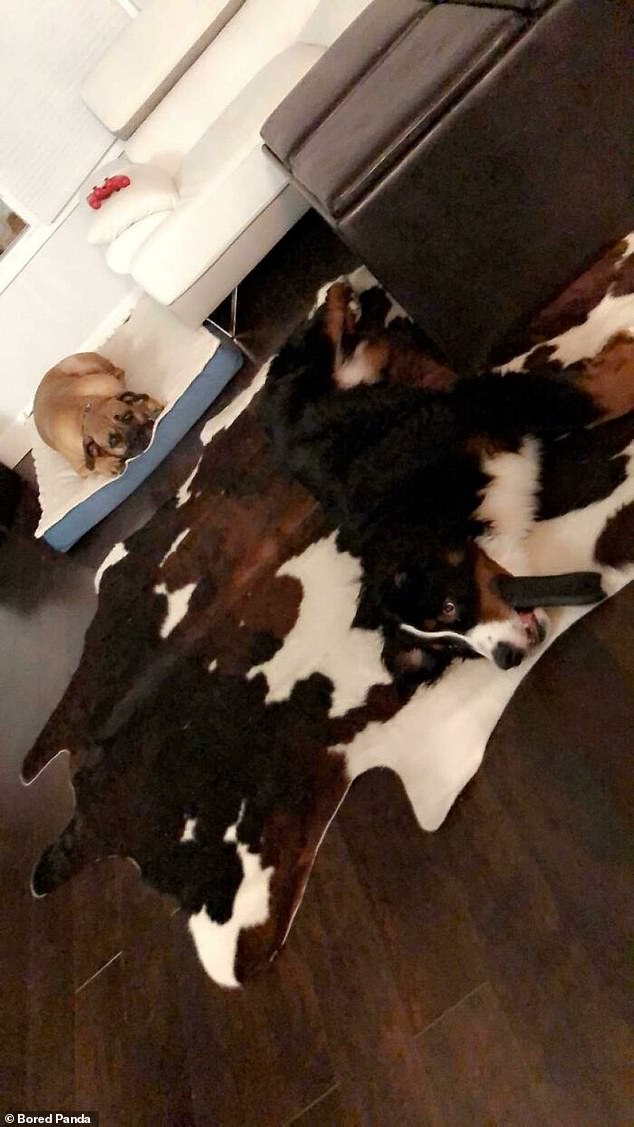 This large tricolour hound, which looks like a Bernese Mountain dog, camouflaged perfectly when it lay down on a cow skin rug 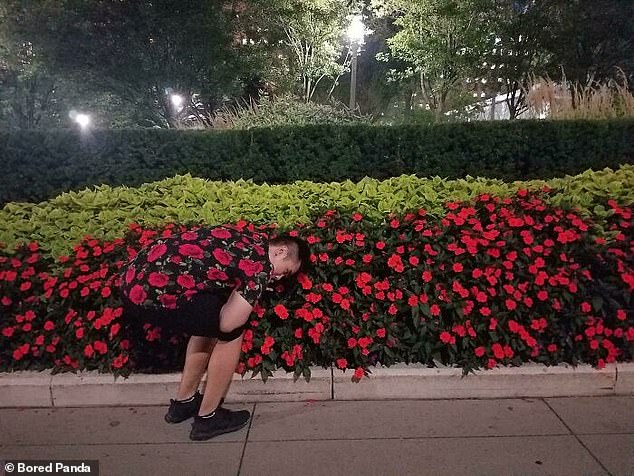 Blooming marvellous! This man’s vibrant floral shirt saw him blend into the flower bed along the pavement when he bent down 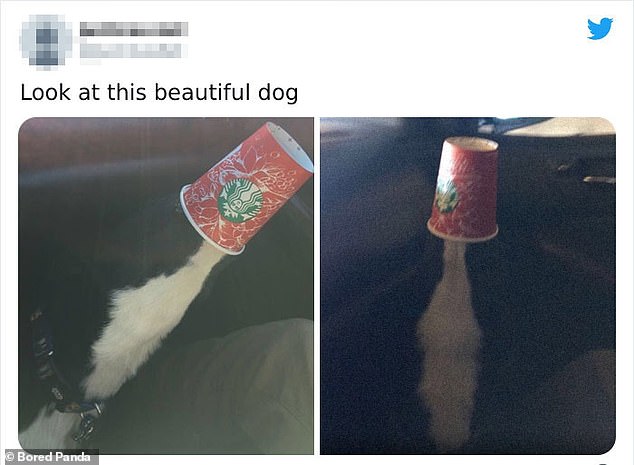 A black and white pooch who got his nose stuck in a Starbucks cup created the optical illusion of a milky beverage pouring out, thanks to the white stripe down his front 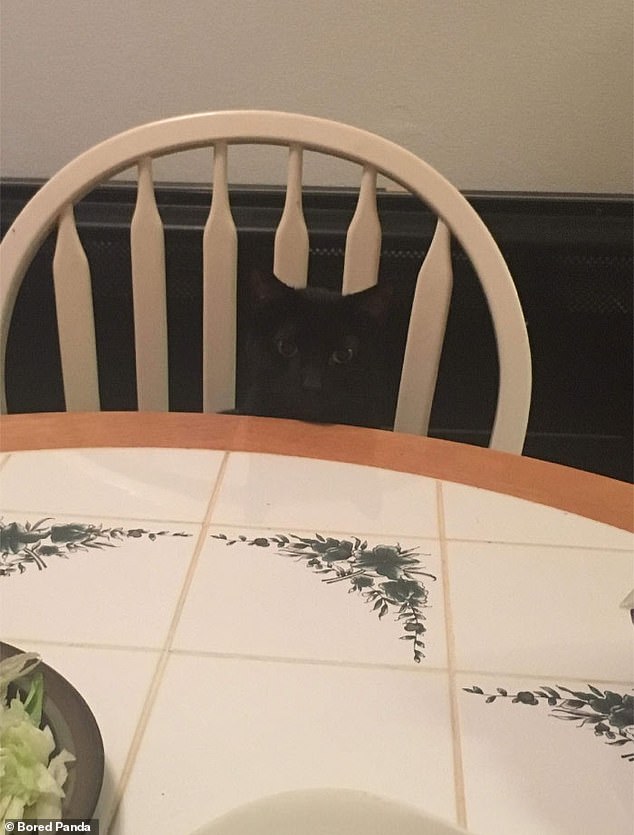 Has the back of this chair snapped? Nope, it’s just a black cat sat at the table, eyeing up the feast 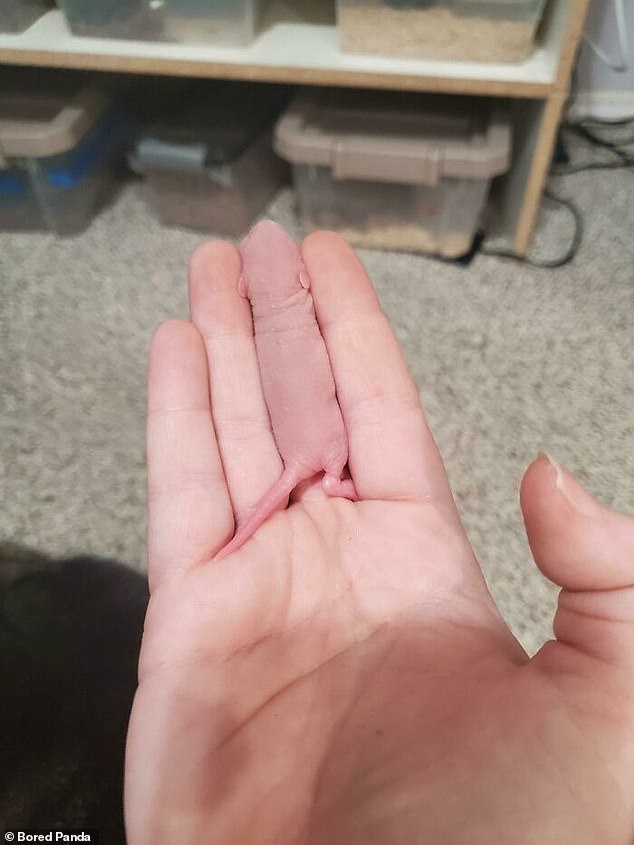 This person shared a snap of their hand with a tiny baby rodent lying across one of their fingers, its pink flesh against their skin camouflaging it perfectly 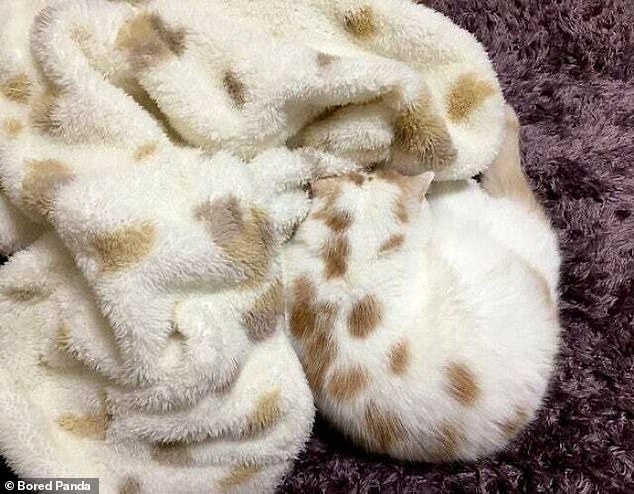 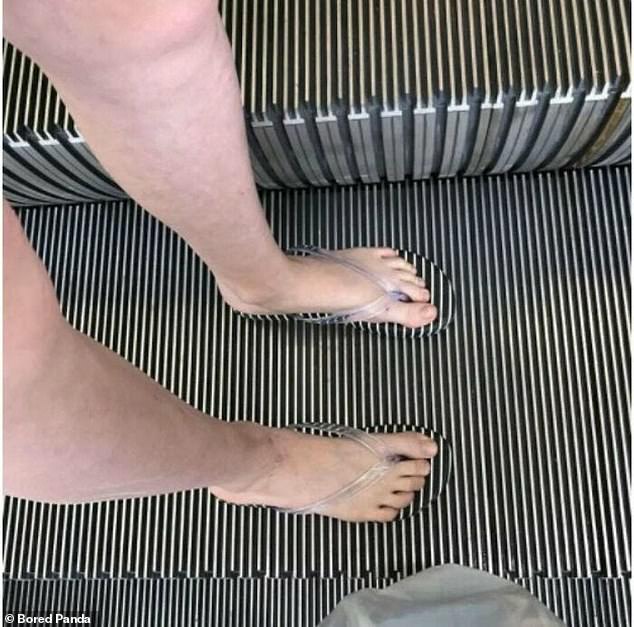 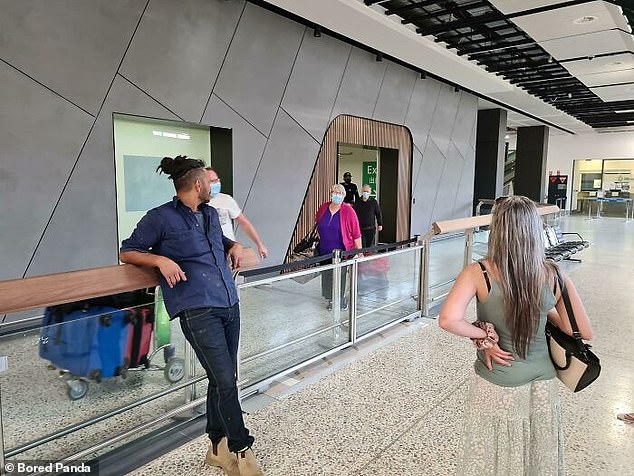 While at the airport, this traveller snapped a picture of a woman whose skirt blended perfectly into the floor, creating the illusion of a floating body 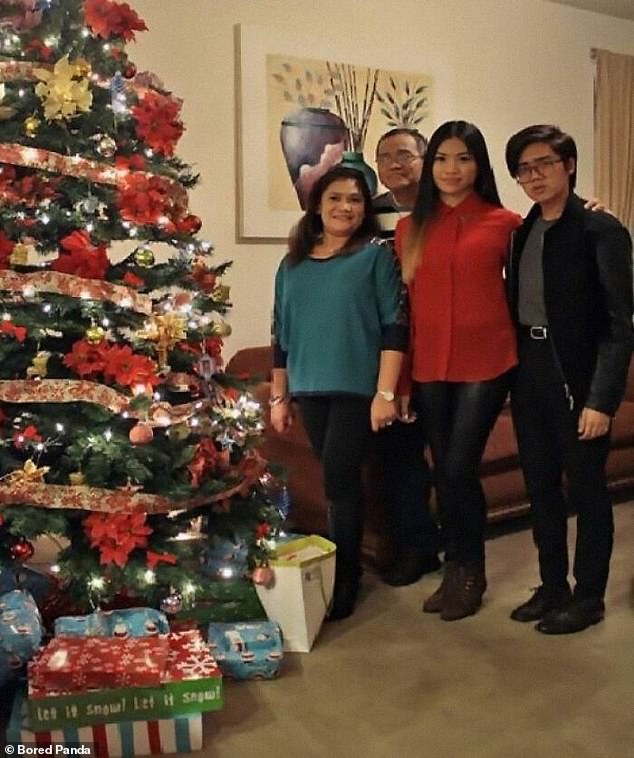 In this festive family photo, the father’s striped T-shirt made it look like his face was actually part of the picture on the wall behind them