Anyone for artifishial cod & chips? We’ve had beef-free burgers and dairy-free milk. Now vegans have got their hands on our seafood too

Many have learnt to love beef-free burgers and dairy-free milk. But can we ever get on board with fish-free fish and chips?

With one in five people in the UK embracing a vegan, vegetarian or flexitarian diet, according to a YouGov survey, ethical concerns about farming have expanded to the sea. The result? A surge in fish-free alternatives.

But with the new wave of fishless fish made of everything from banana blossom to mushroom and tofu, what do they taste like? We asked celebrity fish chef Ed Baines, owner of one of London’s top fish restaurants, Randall & Aubin, to give his o-fish-al verdict . . . 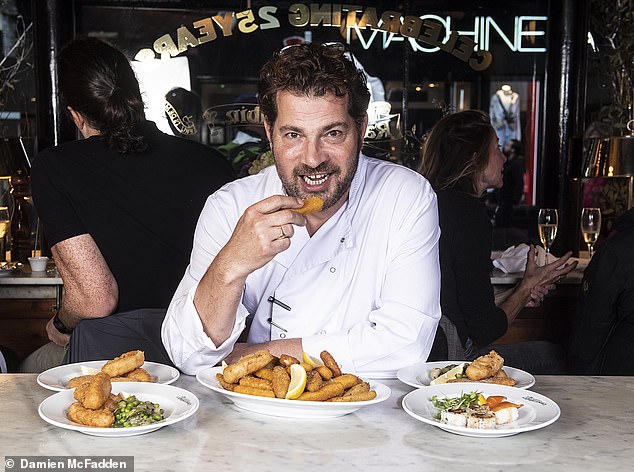 As one in five people in the UK are embracing a vegan, vegetarian or flexitarian diet, Celebrity chef Ed Baines (pictured) gives verdict on a selection of fish-free alternatives 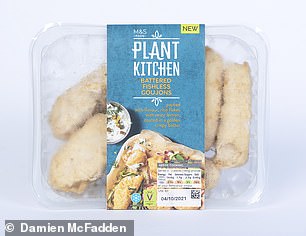 Every year, we eat 380 million portions of fish and chips. To help make the switch, M&S has created six battered goujons made from a combination of rice and potato starch, mixed with pea, potato and carrot fibre, then coated in batter.

ED’S VERDICT: These certainly look the part. They have a good crunch and when you bite them, the whiteness resembles fish. The taste is definitely palatable and if you were to serve this to your kids for tea, with some peas, you wouldn’t get any complaints. However, if I did a blind taste test, I’d guess they were crispy potato croquettes because, as good as this product is, it doesn’t really taste like fish.4/5 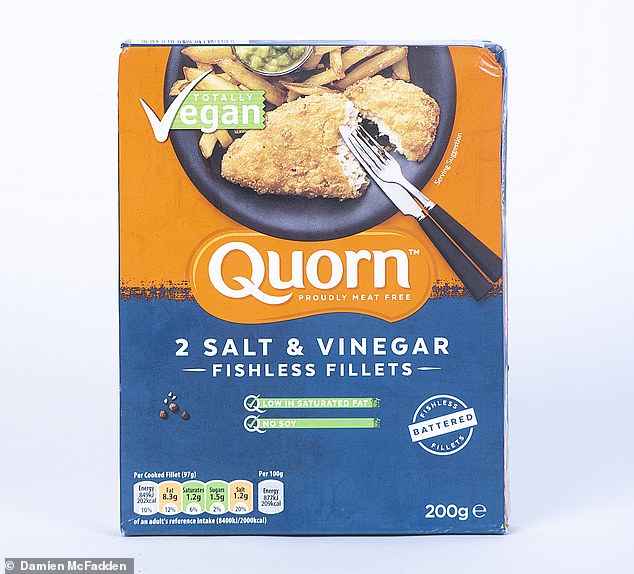 These may look like the fish slabs served with peas for school lunch, but the filling is made from mycoprotein —derived from fungi — mixed with rice flakes and coated in a ‘salt and vinegar’ batter.

ED’S VERDICT: The coating’s strong vinegar flavour is overpowering and the texture within is a bit like a pate — it dissolves on your tongue and doesn’t really resemble fish. Your kids wouldn’t be fooled.2/5 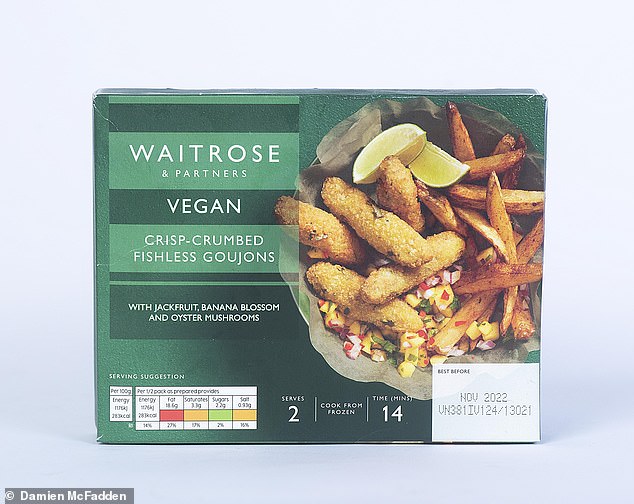 Ed said he would prefer Crisp-crumbed Fishless Goujons (pictured) as party nibbles, rather than the basis for a main meal

These goujons are 23 per cent jackfruit — the rubbery fruit of a tree found in South-East Asia and South America — as well as banana blossom, a tear-shaped flower which grows at the end of a banana fruit cluster.

The chunky, flaky texture of both means they are increasingly used as fish substitutes. Lime leaf, yeast extract, cumin, garlic and onion are thrown in for flavour.

ED’S VERDICT: The texture is similar to prawns as it’s quite resistant and firm. They have an Asian flavour and would fit well on a dim sum party platter. I’d prefer them as party nibbles, rather than the basis for a main meal. That’s because once the interesting flavour hits you, you don’t want to eat too many. 2.5/5 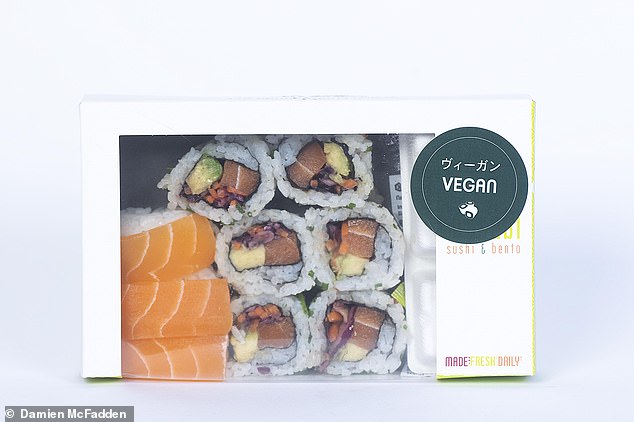 Looking at this sushi set, it’s impossible to tell it apart from the salmon or tuna-based versions. This set includes all the favourites — nigiri and uramaki rolls — but using ‘Xalmon’, which is made from tapioca, a gluten-free starch extracted from cassava root. The orange colour of smoked salmon is replicated with carrot.

ED’S VERDICT: These look like they are made from raw tuna or salmon and the texture is right, although with a far less fishy taste. Even so it’s great when splashed with soy sauce. I was impressed. 5/5

FISHLESS FINGERS ARE STILL A TREAT 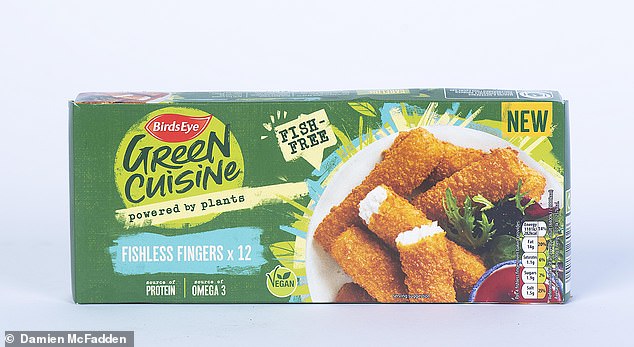 Fish fingers have been a British staple since they were introduced in 1955 by Birds Eye. Now the firm has come out with a fishless version made of rice flakes, wheat flour and potato starch, rather than cod. When we bought them this week from Sainsbury’s, the plant-based version was even cheaper — it works out as 20p each finger, compared to 25p each for the original fish version.

ED’S VERDICT: The best thing about a Birds Eye Fish Finger is the coating. So as they look identical and the coating’s the same, I’d say there’s a 70 per cent chance you could serve the fishless ones and no one would notice. If you had to choose, there’s little reason why you wouldn’t go for the plant-based version. 4/5

TEA AND TOFU FILLETS HAVE A ROLE 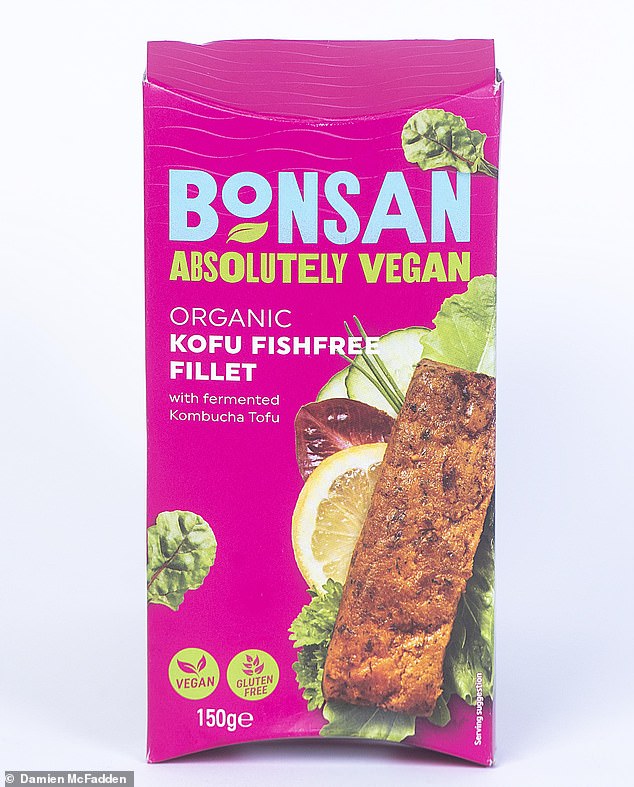 These come out of the pack looking like vacuum-packed kippers. In fact, they are made of tofu, flavoured with kombucha, a kind of fermented, sweetened black tea — as well as seaweed and lemon juice.

ED’S VERDICT: There’s a place for this as an ingredient in an Asian-style dish, cut into cubes for example, as your protein in a Thai curry or in a noodle dish with coconut milk and ginger.

But, this is not something you’d eat on its own with peas and chips. This is the only product we tried that was flavoured with seaweed to give a fishy flavour — seaweed is expensive which is why it’s not used more often. 3.5/5

THIS ONE I WOULD ALLOW TO GET AWAY 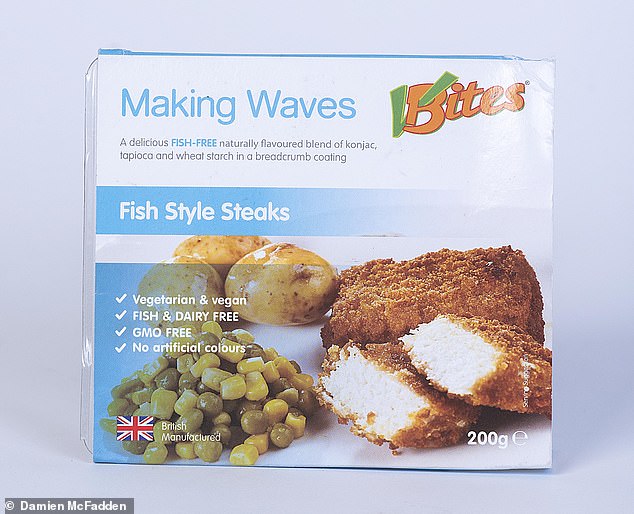 These are two breaded rectangular slabs, which includes konjac, the fibrous contents of a lily-like flower that grows in parts of Asia. This is mixed with wheat starch and tapioca and coated in breadcrumbs.

ED’S VERDICT: You also eat with your eyes . . . and this is like nothing I have ever seen. They are rectangular slabs — with a white filling — which tastes like mushroom pate. Everyone enjoys the breaded coating on products such as this but, as these are rectangles, this is more filling than coating, so they are lacking on every front. 1/5 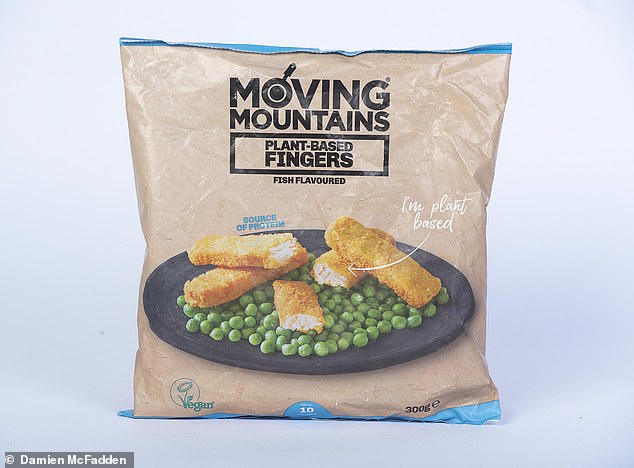 These look like traditional fish fingers but are made of wheat flour and vegetable protein, including 12 per cent soya protein concentrate. The British maker, Moving Mountains, also says they are 100 per cent free of microplastics and mercury, which is increasingly a worry for consumers who eat fish.

ED’S VERDICT: These have the texture of a scampi — thanks perhaps to the soybean content — and a vinegary flavour. The crunch is just right and they are so moreish. Not exactly fish — and not exactly vegetables — but they taste good. Of all the things I tried, this definitely moved my mountain. 5/5 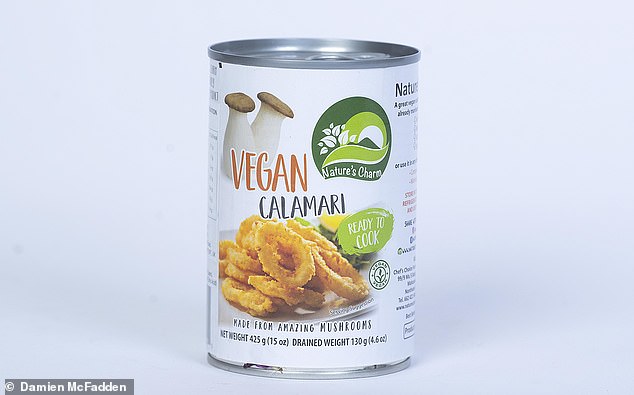 These are made of a type of marinated mushroom mixed with capers and seaweed. They could be eaten raw, but they only looked the part when they were deep-fat fried.

ED’S VERDICT: When you open the tin, these look darker than real squid — as if they’ve been cooked in tea — because they are made of mushroom. But when I battered them, they looked identical to calamari and with a similar texture — though it didn’t taste the same.

If you added enough salt and lemon juice, you could serve this at a party and get away with it — as long as your guests had had a couple of martinis. 3/5

AT LEAST THESE TASTE THE PART 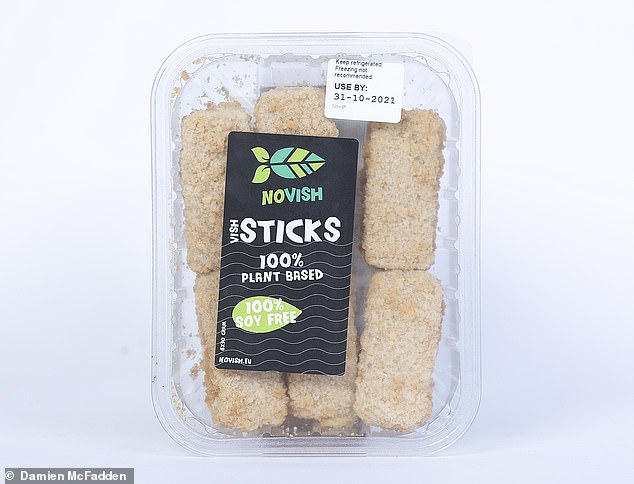 These are stubby-looking breaded vegan sticks with fish flavouring, made from wheat and pea protein with oat fibre. They are also flavoured with Branntwein vinegar, a German variety made from brandy.

ED’S VERDICT: These fingers are breaded so they come with more of a crunch than if battered. The sticks themselves have a firm, springy, slightly rubbery texture. This is actually one of the few here that could fool you into thinking you were eating fish. 3.5/5

Finnebrogue Naked Without The Splash No Fish Goujons, 250g, £3, vegankind.com 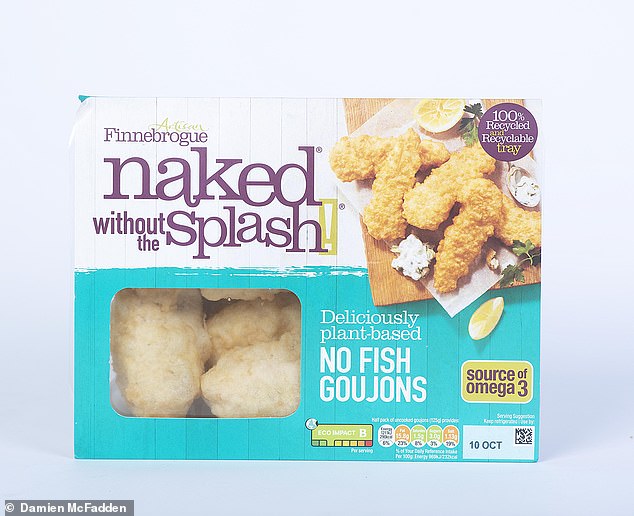 These are five battered goujons made out of rice flour and potato flakes. But, perhaps mindful of the fact that fish are seen as healthy because of their omega 3 content, the manufacturers advertise on the box that this version is supplemented with essential fatty acids, which are important for brain health, too.

ED’S VERDICT: Similar to M&S’s fishless goujons, which is no bad thing, but slightly less acidic, perhaps because they haven’t included dried vinegar. These are proper stodge: comforting and filling. 4/5