HSBC has suspended a senior executive in charge of responsible banking after he gave a presentation downplaying the risk of climate change to investors at a conference called Moral Money, hosted in London by the Financial Times newspaper.

In his address, Stuart Kirk said that the average life of a loan at HSBC was six years, so any impacts of the climate change that happened after that timeframe was irrelevant to investors. 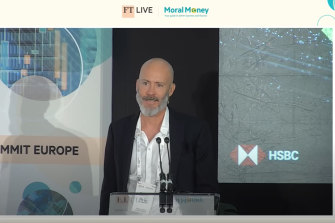 HSBC asset management’s global head of responsible investments Stuart Kirk has been suspended by the bank after giving controversial views on climate change.Credit:YouTube

Kirk said he accepted climate science and supported an economic transition, but that it should be viewed by investors as an opportunity rather than a threat.

He said “nut jobs” had been warning of apocalyptic events throughout his career and had always been proved wrong, and lamented that an undue focus on climate had caused increased regulation and, in turn, more work for his team at the bank.

Kirk was particularly scathing of the former governor of both the central banks of England and Canada, Mark Carney, who famously spurred the global financial sector to recognise the threat of climate change with an address in 2015 now known as the Tragedy of the Horizons speech, arguing that climate change presented a huge economic threat to the world.

Kirk dismissed Carney’s argument, saying retired central bankers needed to find ways to fill their time and arguing that, as the world got richer over coming years, it could afford to pay for things such as increased firefighting budgets in a changing climate.

Kirk’s speech prompted outrage after it was given and, early this morning, the FT reported that Kirk had been suspended pending an internal investigation. 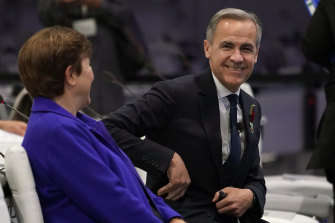 Dan Gocher, head researcher for the Australian Centre for Corporate Responsibility, said the speech was an example of a banker “saying that quiet part out loud” and that, though it was now common for large financial institutions to voice support for social and ethical investing, many did not yet have their hearts in the cause.

He said it also reflected the inequality of outcomes in climate change. Investors were aware that when climate change starts hitting particular countries or markets, they can simply move their supply chains to safer environments, protecting investors’ wealth, but not people.

“I think that’s the thing that it exposes – it’s a very rich person’s view of the world, especially while the subcontinent baking 50 degrees in April and May.”

A guide to the environment, what’s happening to it, what’s being done about it and what it means for the future. Sign up to our fortnightly Clear Air newsletter here.