Given that he’s a Manchester United fan, watching his team get dismantled at Anfield on Monday night would have been a gruelling experience.

However, that pain was offset when he was confirmed as the most successful gaffer of Game Week 32.

His XI, appropriately named ‘The Elite’, racked up 157 points this past week – let’s take an in-depth look at how Carl achieved such a big score… 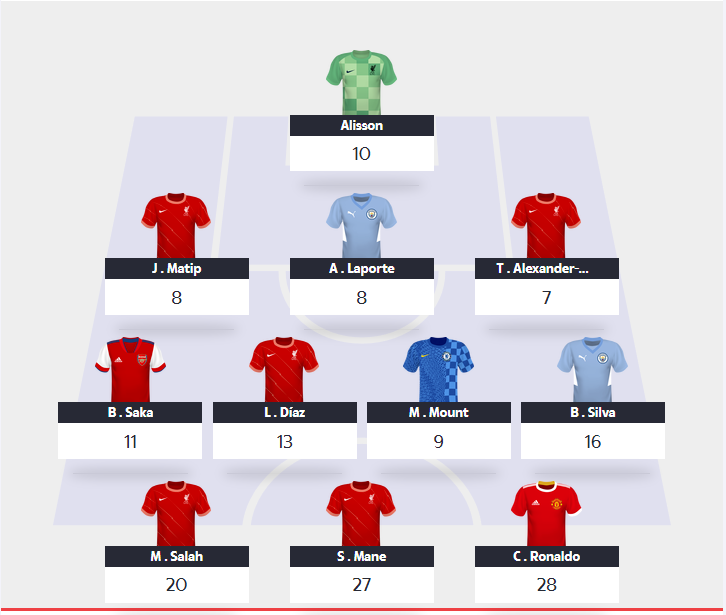 Aymeric Laporte (£5.9m) was rested against the Reds so he swerved a couple of minus points and returned for a solid clean sheet and 7+ rating during his side’s routine win over Brighton at the Etihad in midweek.

Mason Mount (£5.0m) was the only midfielder not to return a double-digit haul for Carl but a goal at Wembley against Crystal Palace ensured he continued his fine form – Chelsea’s No19 has provided 34 points in his last four outings.

Bukao Saka’s (£4.7m) late penalty to seal Arsenal’s win at Stamford Bridge earned eight points to add to the three he picked up at Southampton on Saturday despite the Gunners’ defeat on the south coast.

Carl is one of just 8% of Dream Team bosses currently backing Luis Diaz (£3.7m) and he was rewarded for recognising Jurgen Klopp’s preferred starting line-up when the Colombian scored and assisted during the rout over Man United.

But the jewel in the midfield crown was the consistently brilliant Bernardo Silva (£3.9m) who scored against Liverpool and Brighton to bank 16 points overall.

The Portuguese playmaker has been one of the first names on the team sheet this season and is just one goal away from matching his best ever tally for a single season as a professional.

To say Carl got his forward line right in Game Week 32 is an understatement.

Man United’s legendary No7 scored the 60th hat-trick of his career last weekend and was the Game Week’s top performer.

Congratulations Carl, that’s a dream week that most of us will never be able to replicate.

Good luck to all gaffers ahead of Game Week 33!