The storm that slammed California with up to 15 inches of rain and more than 100 inches of snow before dumping a foot of snow on the Midwest is now taking aim on the Northeast.

And, as it did in California, the system will stall out, burying cities of the Northeast under the biggest snowfall in years. Winter storm alerts covered about 100 million people as of Sunday afternoon.

On Sunday, the main storm over the Midwest was losing steam as it transferred its energy to a developing low along the Virginia coast. This storm will take over, intensify and then sit and spin for days. The result will be 2 feet of snow in spots, coastal gusts up to hurricane force and moderate to potentially major flooding along the coastal areas from New Jersey to Cape Cod.

So far the Midwest has picked up around 10 inches of snow near Chicago, with a little more on the way. A few inches have fallen around Washington, D.C., and several more inches are predicted, prompting Mayor Muriel Bowser to declare a snow emergency. Up until this weekend, the capital had received just 0.3 inches of snow this entire winter. This storm alone will drop 20 times that, with around 6 inches forecast to fall.

The heaviest snow will begin overnight as the coastal low starts pumping copious Atlantic Ocean moisture into New Jersey and Pennsylvania. Although the storm is not expected to have a very low pressure, which is associated with the storm’s intensity, it will more than make up for that with very slow movement and a prolonged easterly fetch of wind.

The reason for the slow movement is a very “blocky” pattern across the Northern Hemisphere associated with a natural phenomenon called a sudden stratospheric warming, combined with the warming effects of climate change, which have thrown the Arctic and Polar areas off-kilter. This can cause the steering pattern to slow down and storms to stall.

This blocky pattern has caused a traffic jam of sorts which is causing storms to stall and wreak havoc, as this same system did when it walloped California. The storm will now stall again, turning what could have been a 24-hour event into a 2- to 3-day haul. That means locations like New York City will see 48 hours of snow — at times steady and heavy, at others light and intermittent. 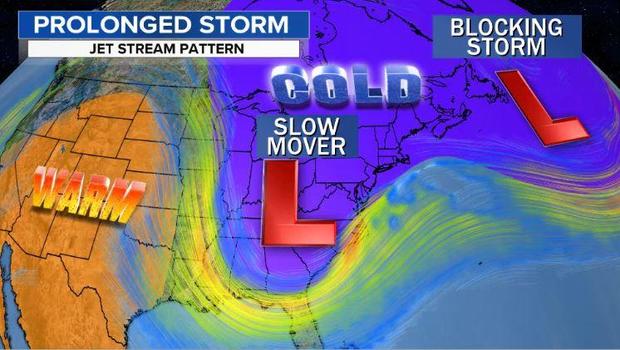 The snow will fall heaviest overnight near Philadelphia, as the initial snow band pushes into New York City this evening. The heavy band will reach northern New Jersey and New York City towards the early morning hours on Monday.

During the day on Monday, a very heavy band of snow and wind will settle on top of Long Island, coastal Connecticut, New York City, New Jersey, the lower Hudson Valley and eastern Pennsylvania. The band will be energized by a long fetch of east to northeast winds funneling moisture into a sub-freezing air mass. 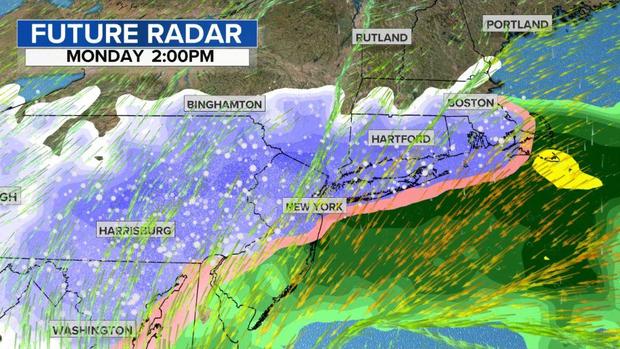 This band will produce snow rates of 1-3 inches per hour, white-out conditions and gusts up to 55 mph. The National Weather Service in Long Island says this may prompt them to issue a blizzard warning. The heavy band itself could last for eight hours or more.

As time goes by, the snow will spread north into New England, reaching Hartford, Providence and Boston during the late morning and afternoon. The snow will fall heavily at times through the evening. From eastern Long Island to southeast New England, winds will gust over 60 mph, with Cape Cod possibly seeing gusts of 75 mph.

The strong and prolonged fetch of ocean winds will stir up seas over 10 feet and pile water up against the coast. 2 feet of coastal flooding is possible along the New Jersey shore, with 2 to 3 feet in eastern Long Island and Cape Cod. This will cause roads to be impassible and inundate homes. The winds will likely result in scattered power outages.

Meanwhile, along the immediate coast from New Jersey to Long Island and Southeast New England, warmer ocean air will spiral in on Monday night. This will cause the snow to mix with sleet and rain, limiting coastal totals to some degree.

Still, a large part of the Northeast will end up with piles of snow. The heaviest appears to be from New York City westward across northern New Jersey, eastern Pennsylvania near the Poconos and the southern Catskills. In this zone,18-24 inches or more are likely to pile up. Even New York City should pick up a foot and a half of snow. 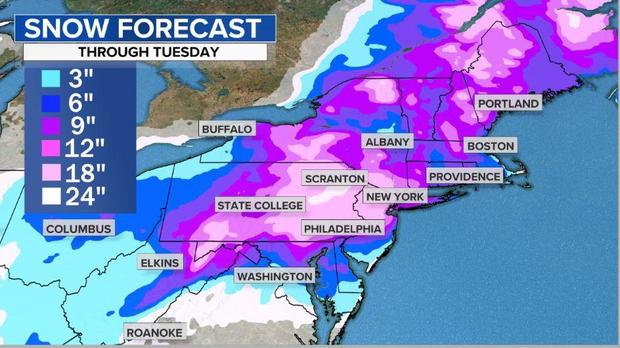 The storm will wind down late Tuesday and Wednesday as the block finally eases and the storm moves out to sea. But snow showers will linger Tuesday into Wednesday morning.