A bridesmaid has been slammed on social media after she got engaged on the dance floor at her close friend’s wedding.

The photograph, which recently resurfaced on Reddit, captures the stunned bridesmaid as she walks across the hall towards a groomsman, who is down on one knee.

The brunette, who is still grasping her bouquet, grins with her hand over her mouth in shock as she gazes down at the ring.

The wedding guest who shared the snap, believed to be from the US, later confirmed the groomsman didn’t ask the married couple before making his ill-timed romantic gesture. 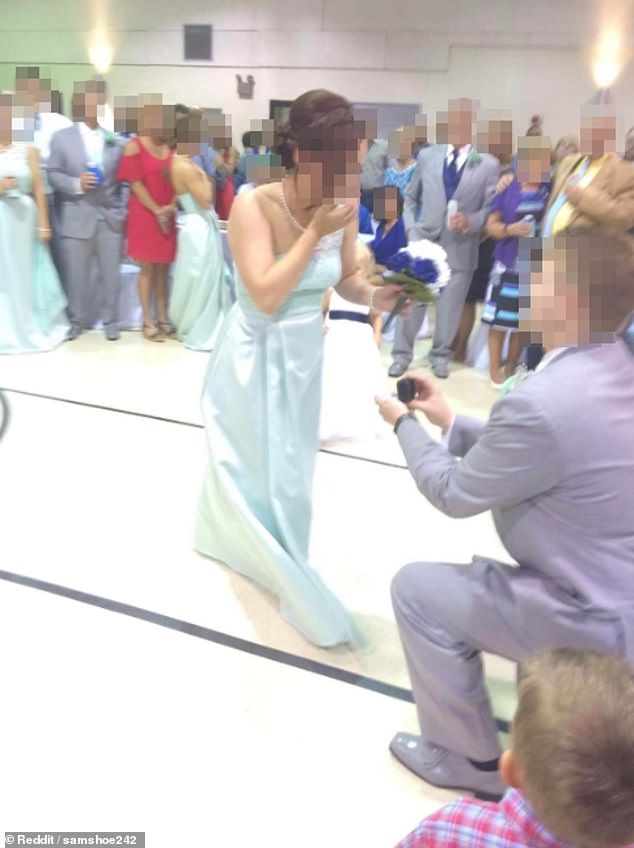 The photograph, which recently resurfaced on Reddit, captures a bridesmaid as she walks towards a groomsman – who is down on one knee during their friend’s wedding

Social media users were less than impressed with the groomsman’s timing, with one user dubbing his behaviour ‘very rude and unacceptable’

Alongside the photograph, the Redditor wrote: ‘The guy didn’t even ask the married couple. So I would argue this is a bit past rude. A perfect time to propose.’

Social media users were also less than impressed with the groomsman’s timing, with one user dubbing his behaviour ‘very rude and unacceptable’.

One user said: ‘If someone did this at my wedding I would never talk to them again’.

Another added: ‘This is the wedding reception equivalent of Kanye stealing the mic from Taylor Swift.’

A third commented: ‘It is rude, very rude and unacceptable, but I don’t see why it’s trashy.’

One user said: ‘I went to a wedding where this happened. It was the most awkward thing I’ve ever seen.

‘After two minutes, everyone totally ignored the engagement and went back to the wedding and the new fiances left soon because no one was giving them attention.’

But another Redditor was impressed by the couple’s savvy proposal, writing: ‘That’s actually not a terrible way to save money.’