One year ago, Broadway theaters were ordered to shut their doors as the coronavirus pandemic rapidly spread throughout the U.S. and rest of the world.

As a result of Gov. Andrew Cuomo's March 12, 2020 order, which banned gatherings of more than 500 people, one of New York City's most popular tourist attractions plunged into darkness, leaving the industry in peril while tens of thousands of people looked for work elsewhere.

At the time, there had been roughly 31 productions running including eight new shows in previews. Another eight shows were in rehearsals and were slated to open that spring, according to The Broadway League.

In the week ending on March 8, just days before theaters were shuttered, there had been 30 shows with a total attendance of 253,453. As a result, Broadway's box office grossed over $26.7 million. 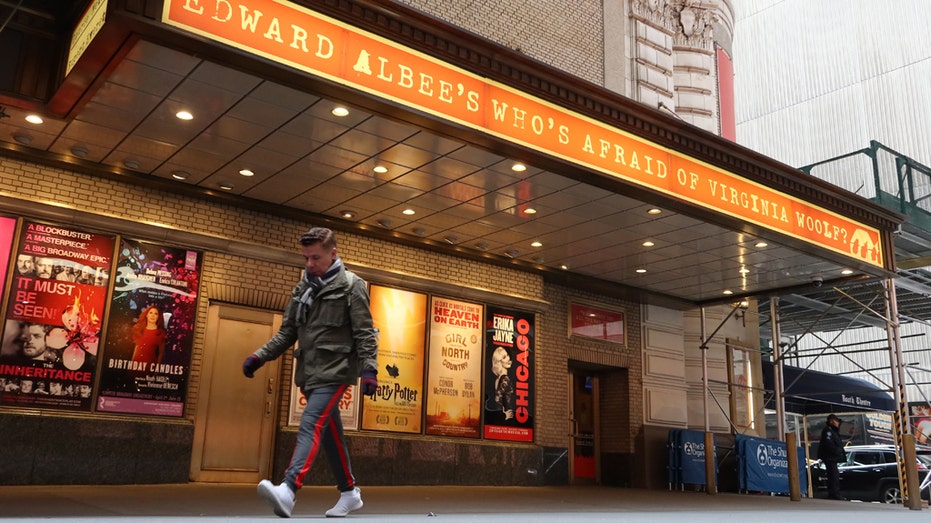 A man walks past the Booth Theatre on March 12, 2020 in New York City. (Photo by Gary Hershorn/Getty Images)

Over the course of the season up until that date, there had been 1,282 playing weeks with more than 11.1 million people in attendance. During that time, Broadway's box office grossed $1.3 billion.

However, in its last complete season, 2018-2019, Broadway grossed upward of $1.83 billion. Based on that figure, the organization estimated that Broadway has lost an average of $35 million in gross revenue per week.

Still, in order to stem the spread of the virus, producers who previously vowed to keep Broadway “open for business” unless advised not to by the government, were forced to close immediately.

By March 13, "nearly 97,000 workers who rely on Broadway for their livelihood" were forced out of practice rooms and off stages for the foreseeable future.

Although Cuomo announced that arts and entertainment venues would be able to re-open at a limited capacity, 33%, on April 2, "the new rules will not affect commercial productions of Broadway plays and musicals," the Broadway League told FOX Business.

Although there has been no official announcement for reopening Broadway, The Broadway League President Charlotte St. Martin has estimated a possible fall return.