School chaplains would gain more federal funding to help young students through the pandemic under a proposal from Coalition MPs to extend what Prime Minister Scott Morrison called a signature government program.

Warning of the pressure on younger Australians from months of lockdown, government MPs pushed on Tuesday for new mental health programs and named the $61.4 million-a-year chaplaincy scheme as a leading candidate for greater federal support. 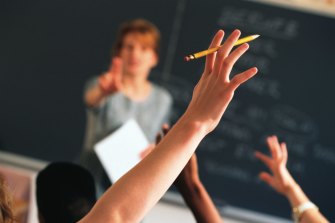 The program has been controversial since its introduction by the Howard government.Credit:

But the idea worried others in the weekly meeting of the Coalition party room because of their long-standing concern that teenagers should receive counselling from qualified professionals rather than chaplains.

The program, which offers about $20,000 each to 3100 schools to employ chaplains, has been controversial since its introduction by the Howard government. An amended version continued under Labor, and it was redesigned again under Tony Abbott after two High Court challenges over the scope of the federal government’s executive and constitutional power to fund religious guidance.

The federal government signed a four-year agreement with the states and territories in 2019 to spend $245.7 million on school chaplains, with this year’s May budget forecasting ongoing funding of $61.4 million a year. Of this, $11.3 million goes to NSW, $12.8 million to Victoria, $18.4 million to Queensland and $7.7 million to Western Australia each year.

Queensland Liberal Andrew Wallace led the request in Tuesday’s meeting to expand the chaplaincy program on the grounds the coronavirus pandemic was increasing mental health pressures on children and the scheme was one way to offer support.

“The plea was to provide greater funding – he spoke about how this is a welcome program, particularly in state schools, but that we need to consider full funding for every school to have a chaplain,” said a Coalition spokesman who confirmed the debate but did not name the MPs involved.

Others in the room said Mr Wallace and NSW MP Julian Leeser praised the chaplaincy scheme while others also warned about mental health problems.

One MP said children were suffering from coronavirus restrictions and this increased the case for the national plan to ease the lockdown rules in stages when the vaccination rate reached 70 per cent and then 80 per cent of people aged 16 and over.

In his response, Mr Morrison described the chaplaincy program as a “signature program” for the government and noted the annual funding had been converted into permanent funding before the last election.

He did not promise more funding or an extension of the scheme but said the suggestion from the backbench was “interesting”.

One Liberal MP said the call raised the prospect of more federal money paying for chaplains rather than health professionals who were in a better position to help young people.

In one scenario, the MP said, a young person struggling with his or her sexuality was unlikely to be comfortable speaking to a school chaplain and would receive better support from a qualified professional.