Numbers phobic CLAUDIA CONNELL finally faces her fears – thanks to one of the world’s best teachers. So… Can a Maths dunce like me pass my GCSE at 54?

The school corridors echo with the sound of lockers slamming, while the kids in the playground are laughing and joking.

Inside the classroom, I’m deep in concentration as I try to calculate what time Lawrence needs to put his 2kg chicken in the oven to eat it at 6.30pm.

No, I’m not having a nightmare. I’m 54 years old and sitting in a maths lesson for the first time in over three decades.

I’m transported back to my school days when I loathed maths — and my teacher Mrs Fletcher . When it comes to Lawrence and his chicken, the teenage me would probably have written, ‘Why doesn’t he just go to KFC?’ as my answer, then carried on doodling the name of whatever pop star I had a crush on in my exercise book. 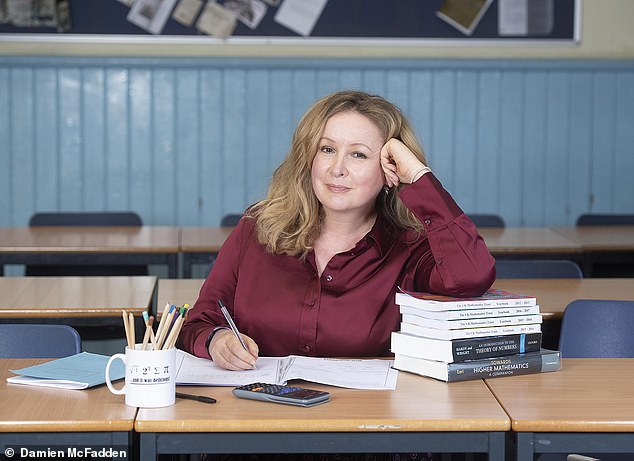 But I’m not being taught by Mrs Fletcher, but Dr Jamie Frost, 34, a numbers genius said to be one of the most inspirational maths teachers around. His online platform (drfrostmaths.com) was a Godsend to teachers and parents in lockdown, receiving 1.3 million hits daily.

As a result, Jamie has been shortlisted for the annual Global Teacher Prize that draws competitors from all over the world. He is in the final ten and the overall winner (announced in December) collects $1 million (£780,000).

If he wins, the money will go to someone who has always had the sort of love for maths I simply can’t imagine.

I became so useless at the subject I was sent to have ‘special’ lessons. While my friends were solving complicated formulas, I was being asked to work out how many apples Johnny would have left if he started with six but gave two to Suzy and one to Sammy.

Instead of O-Level maths, I sat a CSE in the much more basic arithmetic. And I failed that. Hopeless. 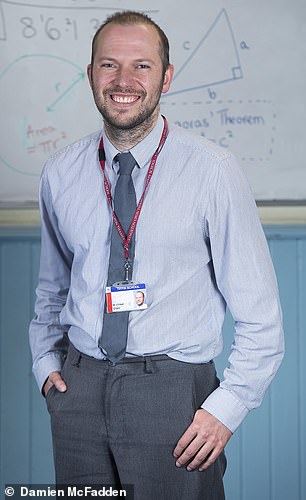 Anything from splitting the bill in a restaurant to converting centimetres to inches sends me into a tizz. Yet my lack of ability with numbers has always troubled me because maths is important.

I also believe I am part of a generation for whom maths was not considered as important for girls as for boys. I have at least three girlfriends my age — all highly intelligent — who state that they simply can’t do maths.

My dream is to sit (and pass) the GCSE I was once considered too stupid to take. Who better to tell me whether that’s possible or if it’s all pie (chart) in the sky than Jamie?

In the meantime, it’s back to Lawrence and his ghastly chicken. The question comes from a Foundations Tier GCSE test sheet, the most basic on the GCSE course. Anyone who can get these right can probably scrape a C grade.

The question tells me it takes 25 minutes of cooking time for each half a kilo of chicken with an added 15 minutes. Lawrence wants to eat at 6.30pm.

‘Yes. Excellent. Well done,’ comes the unexpected reply. ‘You did that in your head too, I’ve pupils who can’t do that.’

I feel buoyed up and not as though I should be sitting at the back in a dunce’s cap. 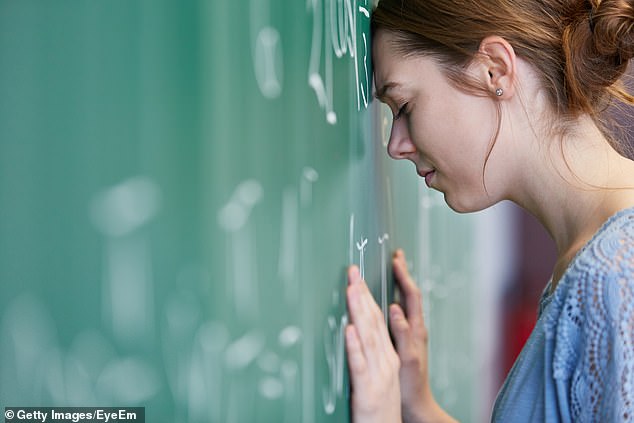 Next, I have to calculate how much Mrs Shankara has spent on train tickets for herself, her husband and three children when a child’s ticket is half the price of an adult’s. I tell Jamie there’s no way I can do it without scribbling loads of sums and maybe even counting on my fingers.

‘So do that then, if that’s what it takes,’ he tells me. ‘People take different routes to get to the right answer and that’s OK.’

Mrs Shankara’s train tickets are a doddle and now I’m on to Matthew’s weekly pay. He works seven hours, five days a week at £10 an hour, then does nine hours overtime at £15 an hour — well, that’s £485, of course!

I’m planning to apply for Countdown . . . until I see algebra and fractions are on the paper too and my confidence goes.

At school I told myself that as an A student in English and Art, I had a creative brain and so had no aptitude for sciences.

Jamie (also a skilled pianist) disagrees. ‘Some people may have to work harder than others but everyone can do maths. 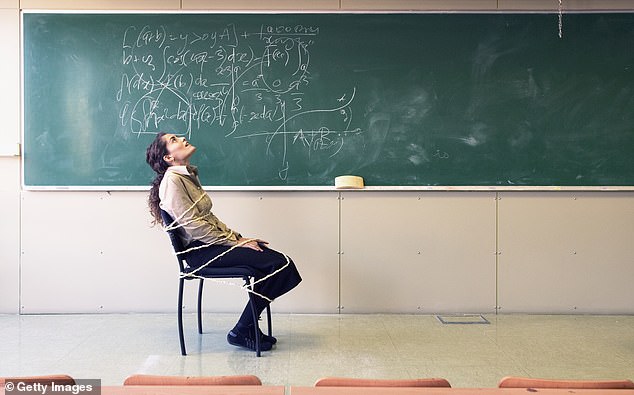 I think it’s very limiting to say, “I’m great at English and art and therefore I won’t be good at maths,” because as soon as you start thinking like that — you’re writing off so much. It’s not one or the other.’

Is there hope? I once did an online IQ test where the questions were so linked to mathematical reasoning my result categorised me as a ‘borderline delinquent’.

‘Oh, IQ tests are nonsense. Take no notice,’ says Jamie, offering the sort of encouragement I wish I’d had 40 years ago.

When it comes to our school maths lessons, Jamie and I were both separated from the rest of the class. But for him it was because the work was too easy.

After getting nine A stars and one A at GCSE, he was awarded four straight As at A-level (A stars weren’t given then) in Maths, Further Maths, Music and Physics. He got a First from Oxford in Computer Science.

He did his teacher training while working at Tiffin School, a selective boys’ academy in Kingston upon Thames where, today, he is deputy head of Maths. 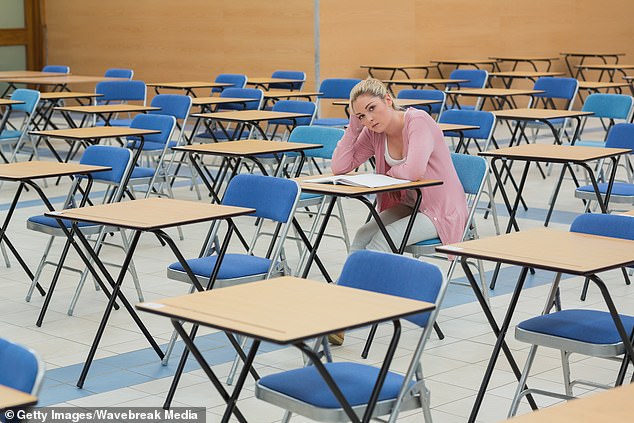 Earlier in life, Claudia says she took an IQ test which seemed her to be ‘borderline delinquent’ because too many of the questions had links to mathematics (stock image)

Tiffin is full of high-achievers and when we meet, Jamie has just finished taking the bottom set for maths. I quip that maybe I should have joined them, but he says, ‘Well, even the bottom set here are probably looking at getting a six (equivalent to a B) at GCSE.’ Maybe not then.

It’s clear the kids love him. On a shelf in class is a card from a pupil thanking him for his help in and out of the classroom, which led to a place at Cambridge.

What makes Jamie, who’s single and lives in nearby Chessington, so effective? ‘I’m enthusiastic — I put a lot of time and effort into creating the lessons and being able to teach clearly. That’s the role of a good teacher, you need to communicate your knowledge simply.

‘I love the challenge of explaining potentially difficult things. When someone has been struggling and then the penny finally drops — it’s the greatest feeling. I have the best job in the world.’

Right now, though, he faces the toughest challenge of his career — helping this clueless pupil with algebra where I must work out the value of Y when X is worth one value and T, another. 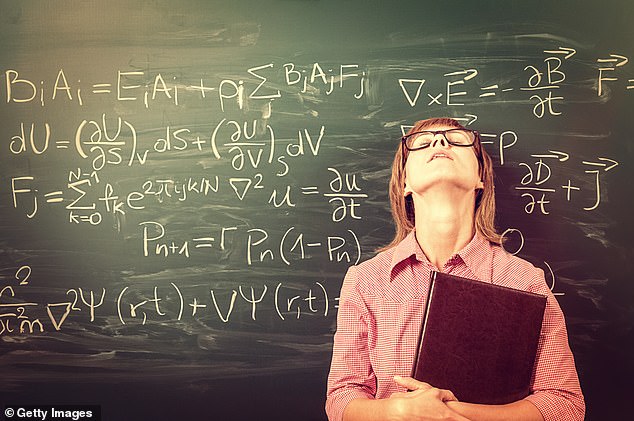 ‘OK, let’s forget the word “algebra” for a minute,’ he tells me. ‘Because that’s making you panic. You’re adding up and you’re taking away, that’s it.’

I apply myself and feel like the class swot when I get the answer right. He goes on to explain fractions so simply that I wonder why I ever had such a block.

At the end of our lesson I ask him — could I pass a GCSE?

‘Yes, you absolutely could,’ he says. ‘It’s true that adult learners will find it harder but it doesn’t mean they can’t do it. You need to practise and stop doubting yourself.’

I vow to spend time each week improving my skills with a few sums. Come January, I intend to enrol at an adult learning centre — and try to pass that GCSE.

And I can’t help thinking how different things might have been if I’d had a teacher like Jamie when I was 14 — I might even be able to convert all those ‘cups and sticks’ in U.S. recipe books without wanting to scream.