‘Can do’ mindset or arrogance? Behind the poor record-keeping of Leppington land deal

The bureaucrats involved in the Leppington Triangle land deal had a “can do and get it done” mindset that may have resulted in poor record-keeping and risk management, an independent review has found.

Infrastructure Department secretary Simon Atkinson commissioned KPMG to review the culture and capability of the now-defunct Western Sydney Unit after a scathing audit report. The Auditor-General found the government had paid $30 million for a piece of a dairy farm near the Western Sydney Airport that was valued at just $3 million less than a year later. 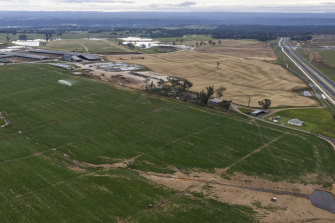 Leppington Pastoral Company owned the land next to the new Western Sydney Airport, which the government bought for $30 million.Credit:Wolter Peeters

The review finds the six years the unit ran for offered “a tale of two teams”. Key factors were the “destabilising effect of leadership churn” with 22 changes in leadership, a lack of focus on important routine tasks like properly documenting key decisions, and the management of operational risks which some staff members saw as merely a “tick and flick” exercise.

However, the report released on Wednesday says: “The extent to which the culture and capability of the WSU impacted the findings of the ANAO is difficult to truly gauge.”

It found the Western Sydney Unit grew from a team of four in 2014 to about 80 public servants and consultants before it was absorbed into another part of the department in 2020.

Initially, the unit was a collegiate, highly talented group with a “special reputation” that was designed to be largely self-sufficient. Staff were highly confident with “can do” attitudes, although the review notes this could be perceived from outside as arrogance.

However, the review found “the pressures of a relentless, high-stress and fast-paced environment with significant leadership churn took its toll” and the culture changed from mid-2018 to become less collegiate with a higher emphasis on the expertise of consultations. The Leppington Triangle land was purchased in July 2018 but negotiations for the sale had taken place since 2016.

“The 22 changes in leadership roles … and inconsistent leadership styles, from highly engaged and inspirational to what were perceived as distant, disengaged and then also authoritarian, also impacted on morale and, potentially, performance within the WSU,” the report states.

The “can do and get it done” mindset “contributed to the perspective that record-keeping was of lesser value” and over time became “overdone and, arguably, as the project progressed, counterproductive”.

One bureaucrat KPMG interviewed said they could “confidently say there were things that people should have got advice on and didn’t. It was not malicious; they just didn’t know.”

The Auditor-General report found there was poor record-keeping of some decisions around the Leppington Triangle sale and key information was left out of briefings to superiors, including the minister.

One public servant is under investigation for potential code of conduct breaches, while a police inquiry into the land deal continues.